More than just a number, 8,703,756 represents years of hard work, patience, and collaboration.

It's the number of the UNLV patent that names chemistry professor Bryan Spangelo and his team as co-inventors on a discovery involving promising new chemotherapy compounds.

The research team has spent the past five years developing the compounds in the laboratory, and have observed that they have greater effect and less toxicity than some existing cisplatin therapies used in the treatment of cancer. 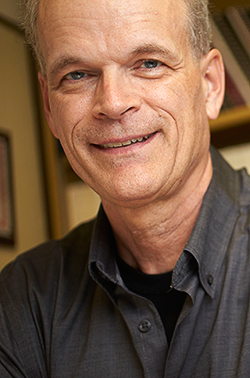 Their discovery involves cisplatin derivatives that use platinum, a heavy metal already used to disrupt the replication of cancer cells' DNA, to anchor a novel tumor-combatting compound.

Their new compounds, Spangelo says, are unique, thanks to the way in which the UNLV researchers were able to modify two rings of carbon and nitrogen atoms -- a change that promises to boost platinum drugs' cancer-fighting abilities while reducing their negative side effects.

Cisplatin is the most common of the FDA-approved chemotherapy compounds containing platinum. While effective in fighting a number of difficult-to-treat cancers, cisplatin can cause serious problems for patients: It can harm the kidneys, can kill the neurons in the periphery of the body, and can cause hearing loss.

Development of the new, less toxic drug began after Vo synthesized a series of new platinum-containing compounds. Subsequent testing on human cancer cells in test tubes indicated that three of these new compounds were, in some cases, much more effective than cisplatin.

"I was floored at the extent of the differences between existing platinum-containing drugs and our compounds," says Spangelo. "In science, we call it 'orders of magnitude,' and these new compounds are hundreds and perhaps thousands of times more effective in terms of concentration."

The research team also discovered that the most potent of these new platinum-containing compounds wasn't toxic in mice. This opens the possibility that these new compounds might be much easier on patients.

The key to enhancing effectiveness while reducing side effects, the researchers say, is using less platinum. Platinum works by causing apoptosis, or programmed cell death, by disrupting the DNA of cancer cells. But these are not precision weapons; when deployed, scores of healthy cells inevitably become collateral damage.

In a clinical setting, Spangelo says, the hope is that use of the new drugs will mean noncancerous cells will be exposed to less platinum. Fewer unintended cell causalities will mean fewer damaging side effects.

He is quick to acknowledge, however, that gaining federal approval and making such treatments available to patients is no simple matter. The researchers' first steps were to formally disclose the nature of the research and then apply for a patent on the discovery. This process involves close coordination with UNLV's intellectual property experts, including Zachary Miles, the executive director of technology transfer and economic development.

Miles says his office supports research faculty and staff in assessing, protecting, managing, and potentially commercializing promising findings -- the "intellectual property" of the researchers and UNLV.

"Through the assessment process we can identify the commercial path the intellectual property may take," Miles says. "After an assessment of the discovery, we then determine if it can be protected and marketed successfully. If it can be, the university will expend resources to file for patent protection. We clearly felt this was the case with the cisplatin derivatives developed by Dr. Spangelo and his team."

Miles says he is excited about the possibilities of their discovery, and he and his staff are currently seeking partners to commercialize drugs covered by the patent, as well as potential research partners to help refine the research.

Spangelo, who came to UNLV in 1994 from the Medical University of South Carolina, says he hadn't thought much about the patent process until recently.

"As a scientist, I was interested in publishing my work and sharing it with the scientific community. But we want to be a Tier One university, and this kind of work has to be promoted," he says.

Patent in hand, Spangelo and his team continue conducting research on their novel compounds. Their next step is to better understand the genetic mechanisms behind their drugs' apparent effectiveness. This was the subject of Vo's dissertation.

"It is a very exciting time here at UNLV, and I am thankful that the administration understands the importance of supporting this kind of work because it is essential for both a medical school environment and the Tier One initiative," says Spangelo. "This is exactly the kind of project that thrives in an environment that supports research."

UNLV Scientist on a Mission to the Red Planet

UNLV Scientist on a Mission to the Red Planet

Geoscientist Libby Hausrath gives an insider glimpse at her role as one of 15 scientists selected by NASA to work on Mars sample return on the 2020 Rover Mission.
How Hospitality Industry Should Address Discrimination

How Hospitality Industry Should Address Discrimination

A long history of discriminatory practices and a UNLV study that shows how it impacts both workers and businesses points to a need for industry-wide change.
Protesting Police Brutality