Driving Back to the Starting Line

Francisco Franco used to commute to school in a stock Oldsmobile in the late 1990s. When he was invited last year to bring the same car — now a custom lowrider — back for an art exhibit, it was a full-circle moment for the UNLV alumnus.

Francisco Franco leans on his Oldsmobile Cutlas Supreme, called "Foolish Pleasure," which he drove to UNLV nearly 20 years ago as a student. (Photo by Josh Hawkins/UNLV Creative Services)

Francisco Franco bought his 1984 Oldsmobile Cutlass Supreme when he was 16. It might’ve been a 12-year-old car, but it looked like new when he drove it off the lot on Boulder Highway.

By the time he was commuting to UNLV, Franco was working full time, taking a full class load, and living with a girlfriend he hardly got to see in between. She would bring him dinner at the Paul B. Sogg Architecture Building so he could eat as his desk, looking down at that Olds in the parking lot in all its squared-off sides and vinyl landau roof glory.

Over the years since then, Franco was always shining up that Oldsmobile. When the Donna Beam Fine Arts Gallery was debuting its exhibition “¡Americanx!,” featuring work by local Latino artists, Franco got the call to display the car, by now a fully tricked-out lowrider called “Foolish Pleasure,” at the Oct. 1 opening.

“That car was literally on those same parking lots I was roaming around way back when,” said Franco. ’03 BA Sociology. “Whatever day, whatever time [UNLV] needs it, there’s no way I’m not going to do it. I was so excited.”

Francisco Franco isn’t the only alum out there rocking UNLV ink. From former athletes to current staff, Hey Reb! has spent as almost much time on the skin of Las Vegans as he has on the Thomas & Mack hardwood.

With the addition of the Golden Knights and soon the Raiders, Tyson Taumaoe, an artist with Hideout Tattoo on Main Street, saw that Las Vegas was quickly evolving into a major player in the pro sports landscape. So he used Hey Reb! as a jumping off point for his “Savage Sam” character, incorporating both the Knights' helmet and the Raiders' crossed swords and eyepatch. “I initially did it as an ode to the sports town we’ve started to become,” Taumaoe said. “I thought Hey Reb! was pretty much the first symbol for that. So I took Reb and decorated him with all the new sports and renamed him so that he’s encompassing all of Vegas. I like to think of him as the short attention span, adrenaline junkie son of ol’ Reb.” When one sports-fan client got a gander at Taumaoe's creation, it was ink at first sight.

Nick Sakha, ’14 BSBA Management, was looking for a Hey Reb! that had its own look and feel. While Sakha was still a student, he turned to Bernard Dunn of Classic Tattoo on Fort Apache Road to bring it to life. “I love the concept and definition of ‘rebel,’” Sakha said. He now owns an Allstate insurance agency in Las Vegas.

It wasn’t just a nostalgia cruise, returning to the university in the car that used to bring him to class. Franco sports the arched UNLV word mark — the one at halfcourt on the floor in the Thomas & Mack Center — tattooed on the outside of his left wrist. It’s a piece of Rebel pride inextricably tied into his own personal history.

Franco came to the United States from Mexico City at 8 years old with his mother, grandmother, and younger sister in the mid-1980s, starting over in the valley to seek a better life.

“I always knew that going to college was a part of that,” Franco said. “By the time I graduated from high school, I considered maybe going out of state, but I had grown up here. All the family I have is still here. It was never a tough decision to go to UNLV. I get to stay home, I get to be with my family, and I get to go to college.”

The 15-credit semesters, eight-hour workdays, and car restoration on the side made for a hectic schedule. He bussed tables at restaurants near campus and worked at the old Sporting House fitness club on Industrial Road or at a blueprint factory. 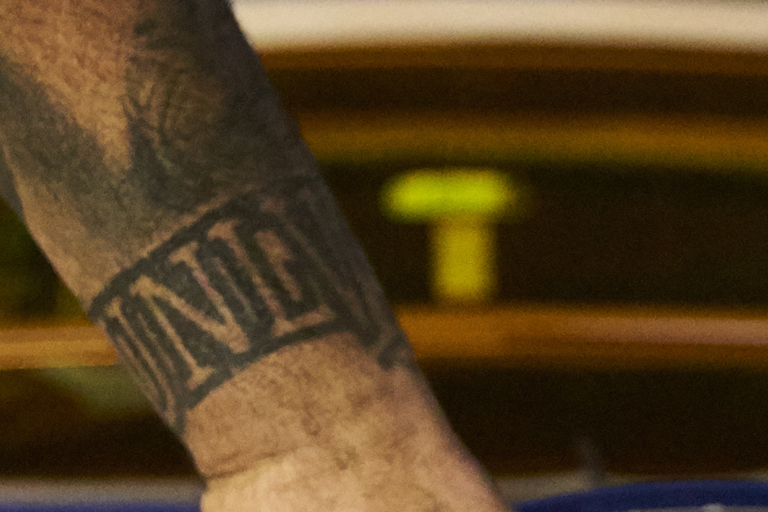 Fresh, faded, touched-up, or all-original: share your crazy, cool UNLV tattoos in all their glory. Tag your UNLV-related ink on Instagram with #UNLVtattoos so we can see who's got the most Rebel pride out there.

Brandon Anderson, a tattoo artist with Black Spade Tattoo at Container Park adorned Leon Moore, a former UNLV defensive lineman who played in 2003 and '05, with a classic Hey Reb! “My approach was fairly simple," Anderson said. "Me being a Vegas native, I knew that I had to capture those bold lines and distinct features of the iconic Hey Reb! in order for it to stand out. It's a fairly big piece on a bigger arm, so it took a while.”

Tark the Shark gets a hyper-literal depiction with this piece from Chad James at Studio 21 Tattoo on Flamingo Road. Hey Reb! rides a towel-chomping shark that's rocking a number 57 jersey — which is the number Hey Reb! wears at games, commemorating the year the university was founded as Nevada Southern. If Maude Frazier could have seen this coming, the pioneering educator might have gotten a matching piece long before this Runnin’ Rebels fan.

In the midst of all that, what would have been a hectic schedule for any sophomore took a turn to the downright frantic.

“I was in my drafting class in the architecture building,” Franco said. “I got a call [from my then-girlfriend, now wife]. She called a couple times, so I knew it must've been important. She told me, ‘Hey, you're going to be a dad.’ To me, it wasn't like I had to pick and choose. To me it was like, ‘Well, we'll figure it out. We're going to make it work. I'm going to make my car thing work, I'm going to make college work and I'm going to make everything else work.’”

After taking some time off to adjust to family life, Franco returned to UNLV to finish out his bachelor’s, crossing the Thomas & Mack stage in 2003 with a degree in sociology after switching from architecture.

“The moment I walked and had my cap and gown, it just vindicated what my mom done,” Franco said. “To this day I’ve never seen my actual diploma. I handed it right to my mom and said, ‘I got this for you.’ I have the memories. I have the experience. I’ll always be able to say I’m a UNLV graduate.”

Mary Marshall-Lang has been part of UNLV since she arrived in Las Vegas from Chicago in 2012, earning her bachelor’s in elementary education — at age 50 — her first master’s in 2016, in education, and her second master’s in 2018, in public administration. She started working in the Financial Aid & Scholarships office in 2013 as a graduate assistant, going full time in 2018 as a financial aid counselor/process analyst. After that first master’s that she decided on a Hey Reb! tattoo as a graduation present. “My husband, who also got his master’s the same year, wanted a ring. I didn’t want a ring, I wanted a tattoo.” Marshall-Lang. She turned to Hypnotic Inks Tattoo on Las Vegas Boulevard to get a proud Hey Reb! that was supposed to just be an inch high, and ended up about 10 times that big. “I just went with him as the mascot. I thought he was pretty awesome.”

Alumnus Francisco Franco started adding his tattoos later in life, but one he knew he had to get was something that recalled his time on campus. The UNLV letter mark on his wrist is a permanent reminder of the sociology degree he earned in 2003, and all the work he put in along the way between jobs, class, and the birth of his children. “All my tattoos represent a chapter in my life,” he said. “Even now, I still consider myself a Rebel. I'm always about UNLV. I still talk about the glory days of basketball. The Runnin’ Rebels were real big right after I got here to Vegas. That had a lot of influence on me.”

During summers as an undergrad, Franco worked at the Las Vegas Valley Water District, where he now serves as a meter mechanic crew chief. He and his team test and service meters on the casinos and other large-scale buildings.

Since he became an alumnus, the car collection has grown — with a ’59 Chevy Impala and a ’48 Chevy Fleetline. The tattoos were a recent addition, just a couple of years old.

“UNLV represents home, represents my family, and it represents the whole reason why my mother tried to bring us out here in the first place,” he said. “To have a good life.”

Franco’s daughter, Isabel, is a rising sophomore in the Greenspun College of Urban Affairs in the communication studies program. His son, Francisco Jr., started his education out of state but is likely to transfer back home to take up the scarlet and gray.

Which means that sometime down the road, one special Cutlass might be carrying carload full of Franco graduates up Maryland Parkway.

A Titanic Force for Southern Nevada

Those who worked closest to Robert Lang remember the head of The Lincy Institute and Brookings Mountain West, who died in June.
More about People