The Machine came to America in 2004 from Germany, sailing through the Panama Canal in a 40-foot container. It grew to take up a 754-square-foot room in the Chemistry Building. And kept growing. By 2010, The Machine wedged on the diagonal to fit into a 1,272 square-foot research space built specifically to house it in the UNLV Science and Engineering Building.

The Machine is hungry.

It doesn’t just feed on square footage, though. Chemistry professor Clemens Heske’s only-of-its-kind apparatus gobbles up molecules, atoms, and electrons. It swallows samples of perfectly packaged materials. Its blood is vacuum purer than that around the International Space Station. Its veins are, well, plastic tubes fused into buckets of concrete.

Those five-gallon buckets stop the tubes from vibrating, which can interfere with measurements that go as fine as single atoms. For such a big beast, The Machine is surprisingly delicate in its pursuit of unlocking the secrets of interfaces — exploring how and why materials interact.

It stands five feet tall and has a 60-quart bowl that gets so weighed down with food it has to be raised and lowered by a crank. The Hobart mixer inside the Beam Hall service kitchen is a powerhouse of dough pulling, sauce stirring, and potato mashing. Imagine how much easier this baby could make Thanksgiving for even the largest of families — the ones where all the third and fourth cousins go back for seconds. “It's a very versatile machine,” Executive Chef Mark Sandoval said. “There's a grating attachment you can do a whole five-pound block of cheese. There's a grinding attachment to make your own ground beef from chuck. Say we're having a party for 100 people; to make mashed potatoes in here is one batch is easy. When we make bread dough, this is what you really want. We can do 20-30 loaves.”

A significant portion of the work involves materials used in solar cells. The work helps make renewable energy more efficient, though Heske believes the future of car fuel is in hydrogen — another research area his team of undergraduate and graduate assistants is exploring. Nuclear materials have been studied, and in other activities, Heske and his group develop ways to look at samples in situ, observing surfaces inside a battery while it’s charging and discharging, for example.

A sample’s journey into the heart of The Machine starts in twin gloveboxes where samples are prepared in an inert chamber – sealed with a vitally important piece of specialized scientific equipment.

“The key element is that FoodSaver from Target,” Heske said. “But it is the luxury version, the $149, not the cheap version.”

Once samples are loaded into The Machine from the gloveboxes, they are steered through its chambers and past its porthole windows, by rotating arms that handle the samples through slender-tined forks.

The Machine sports two vacuum chambers with electron analyzers, one from its original iteration in 1985, and one that was added after Heske came to UNLV in 2004. In those chambers, samples can be bombarded with electrons, X-rays and ultraviolet light. In the newer one, samples can be heated to 1,200 degrees Celsius or cooled to hundreds of degrees below freezing using liquid helium.

“I call it the surface scientist's dream machine because everything is optimized for surface science,” Heske said. “It's the best machine on the planet for doing this. The limitation is the manpower and the fact that it's rather complicated.”

And we don’t mean heavy like Tolstoy or Nietzsche. We mean heavy as in “Ow, my back.” One of just 25 copies of Liber Ignis lives inside the Lied Library’s Special Collections & Archives. The work of Peter Koch, a designer, printer, and author, Liber Ignis (translation: “Book of Fire”) shows the bleak landscapes of Montana mining towns juxtaposed with verse from poet Adam Cornford, and all laid out on pages made of actual lead and bound in copper. It’s about 40 pounds of near-indestructible art.

Heske splits his time between UNLV and the Karlsruhe Institute of Technology in Germany, and the budget for operating The Machine comes in part from that university. The team that has worked on it, likewise, is international. Flags of researchers’ native countries adorn the upper reaches of The Machine’s lair.

The projects, too, are collaborative. Other research universities and national labs join forces with UNLV to access The Machine, bringing Heske’s team into the fold.

It’s because the device is unique in the field that UNLV has become an indispensible research partner. That uniqueness is only because The Machine was adapted and evolved, instead of built to an original vision.

“Originally we thought this portion would be a standalone machine until one day one of the postdocs said, ‘Oh no, we're going to couple it to that other one,’” Heske said. “I said ‘You're crazy. We're not going to do that.’”

But the postdoc prevailed and The Machine morphed. “It's not like at age 18 you wake up one day and want it like this. Still you wake up at night, when you design something like this, with nightmares of flanges and windows and so on. There is one flange on which you cannot tighten the bolts, but so far it's always worked.” 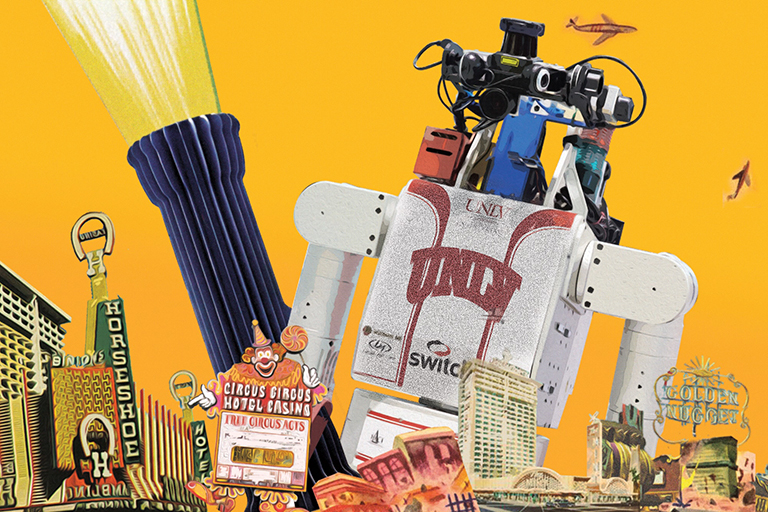 A yearlong collection of UNLV faculty making the news for their discoveries and contributions to the community.
UNLV Geoscientist Arya Udry Tapped by NASA for Mars Mission

Udry is one of just 13 scientists added to NASA’s Participating Scientist Program and will help the Perseverance Rover to recognize magmatic rocks; becomes second UNLV professor on Mars 2020 science team.
More about Research