It's hard to argue the significance of the Downtown Project's $350 million investment in Las Vegas' urban core. New businesses are popping up beyond Fremont Street and cultural offerings of all kinds are pulling locals to the once low-brow area. The optimism for the development is contagious. And -- right smack in the middle of all this hustle and bustle -- we're proud to find plenty of players who wear our scarlet and gray. 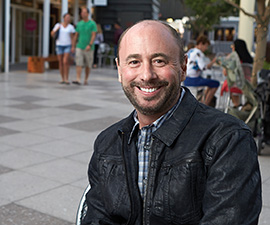 After a childhood trip to the Hilton Towers in Chicago with his grandmother, Michael Downs was "enamored by beautiful grand hotels." So he came to UNLV to learn how to run them. His most recent seven-year run at the Bellagio had him overseeing a resortwide room remodel, meticulously done in three-floor stages to keep the dust and noise from guests. A couple decades of hotel experience had helped Downs see that project from different angles, executing on larger outcomes while attending to the details. Now, he is on to an even grander effort.

He and longtime friend and Zappos founder Tony Hsieh had discussed working together many times in the past. It finally happened in January 2013, when Downs joined operations at Downtown Project, a $350 million urban revitalization project backed by Hsieh. Downs' job is to "activate" the real estate assets the Downtown Project buys, which can include design, construction, leasing, and plenty more.

Walk down East Fremont Street and nearby areas and you'll see plenty of his handiwork, including the Container Park and the Gold Spike renovation. The Downtown Project has about 300 initiatives under watch right now.

Downs considers himself lucky to be part of a team of visionaries. "We're just making sure that everything we do is either first or unique to the market, or is the best to market. Those are our three guiding principles," he said.

Downs also highlights the importance of his team's use of the Holacracy program in its decision-making. The new system, also embraced by Zappos, ditches management and hierarchical structures. So the roughly 70 people at Downtown Project have their work organized around the people instead of having people plugged into a traditional top-down structure. "For the first few months it was a transition for all of us. We kind of give the keys away to the team," he said.

While studying philosophy and art history at UNLV, Jennifer Herrington Cornthwaite spotted a business opportunity. She had come across quite a few art students and graduates without an outlet to show their work in town. So after graduation, she sidelined her law school plans and opened a gallery in downtown's The Arts Factory. "I just knew I had to create something for myself," she said. "I figured I'd do what I love and, if I fail, I'm young and I'll figure something else out."

The Northern California transplant did eventually close that gallery. But she learned some lessons and applied them to her new ventures, ones that had a hand in kicking off downtown redevelopment efforts in earnest.

In 2010, she turned the old Fremont Medical Center into a haven for creative entrepreneurs. It now houses Cornthwaite's The Beat Coffeehouse and Emergency Arts, a collective for a wide range of businesses run by artists, writers, fashion designers, and architects. The site can be seen as somewhat of an incubator for small creatively driven enterprises, many of them sole proprietors.
Now, as a co-owner of Future Restaurant Group -- along with her husband, Michael Cornthwaite -- she is a partner in other restaurant ventures and employs about 50 people. Their venues include Inspire News Caf? and Theater and Oscar's Beef o Booze o Broads steakhouse in The Plaza. The latter is a partnership with former mayor Oscar Goodman.

The Cornthwaites also are backers of the Huntridge Theater revitalization efforts. The long-shuttered venue -- which hosted such major national music acts as the Smashing Pumpkins and Green Day while they were up and comers -- is a historical and cultural symbol for many longtime Las Vegans.

"With what's going on [downtown], we're hoping there are more positives than negatives. Nothing's perfect. We're all just trying to do the right thing," she added. 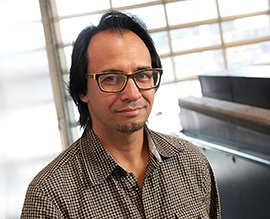 Robert Gurdison helped redesign Las Vegas' old city hall, which last year became the new headquarters for Zappos Inc., arguably downtown's most impactful economic and cultural game changer. The valley native and longtime proponent of downtown redevelopment had made an impression on Zappos founder Tony Hsieh with his work, and since then Gurdison set up his own downtown architecture firm, D!G Design Group, a venture with fellow UNLV architecture grad, Ly Dao. Their firm was involved in redeveloping the old Ferguson Motel, which should open as a 60,000-square-foot retail, office, and entertainment district later this year.

Gurdison was ahead of his time when he talked up downtown redevelopment for his 2001 graduate school thesis, and admits to being pleasantly surprised by the massive changes to the area in the past two years, including the growing cadre of firms that have set up shop there. Several have been founded by yet more UNLV graduates, including Craig Palacios and Tina Wichmann's Bunnyfish Studios; and Jeff Wagner's [N]Site Studios; as well as Amy Lee Finchem's design agency COLAB.

"It's great to see architects moving down here. The last time I saw something like that in a major city was in Boston," he said. "Being a local and growing up here, you become really focused on seeing downtown become a true civic realm, where people can point a finger to and see where Las Vegas culture happens."

Gurdison has won the American Institute of Architects Nevada's Young Architect Award. Prior to striking out on his own, he was the director of design at Carpenter Sellers Del Gatto Architects. Today, his firm of fellow Rebels (eight of the nine employees are alumni) is housed in that same building he proposed to redesign for his graduate school thesis. 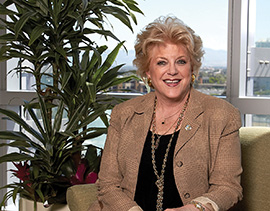 You could argue that no one else really had a chance to win the mayor's race against Carolyn Goodman in 2011. Under her husband Oscar's previous three terms as mayor, she had seen redevelopment efforts pick up steam. She believed in the area's progress and didn't want to see it eroded should the city's next mayor want a much different course.

"To be truthful, that was the only reason I ran," she said. "I knew the wonderful momentum council and staff created ... and I said, 'Let's continue this.'"

And being mayor was a natural next step for her own city development projects, in a style very different from her showman husband's. As founder and then president of The Meadows School for 25 years, Goodman was adept at wrangling supporters, building systems, and keeping operations running smoothly.

Now, she sees to it that the city's doors are open to business leaders and anyone outside the city who has a curiosity about Las Vegas. And when the microphone is on, she will promote or defend, as the case may be, the merits of her city with anyone. "I do believe in the power of the bully pulpit. You use the power, the influence," she said, to push for progress. She spearheaded efforts to enact the Nevada Film Tax Credit, curb underage drinking downtown, and encourage collaboration among the city's nonprofits.

While she is encouraged by the business and community development happening downtown, she is concerned about safety issues in the area. "I'm a huge advocate for more cops," she added. "Without safety you have nothing. Nobody's going to come here, and nobody's going to do business here. Safety, to me, is the single most important issue." 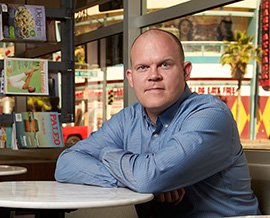 Like any other Downtown Project member, Paul Cline eschews titles. After managing construction jobs for local contractors, Cline is now doing it for an entity that has arguably one of the most important roles in reshaping downtown.

Cline was offered his job while trying to sell his previous employer's construction management services. There was a miscommunication prior to the meeting and his understanding was that the Downtown Project was looking for an experienced contracting company to help manage jobs. Instead, he quickly learned that the entity was looking for one manager, and his skill set fit the bill. Content with his current employer, he took a little time to consider the offer. "My wife asked me when I would have $350 million to spend on redeveloping downtown (again). I pretty much knew the answer," he said.

Cline makes sure projects are seen through to completion. He also leans on his architectural insights to shape a densely populated, walkable community with restaurants, schools, and parks -- or "a real city" in his eyes. "It's a bit against the grain. The West, in general, is more focused on cars," he added.

Cline sees the downtown development boom of the early 2000s as a bit of a false start. Those condo projects were largely built for seasonal residents. Today's efforts are more community-oriented and geared toward creating not only a destination but a place for people who want to live and work in downtown full time.

"Cities have more patents per capita; they create more wealth per capita," he said. "As density increases, the accelerating returns increase. ... A lot of evidence suggests this happens because of the actual connections we make with people in cities, because we walk past each other on the street, sit next to each other at the caf?." 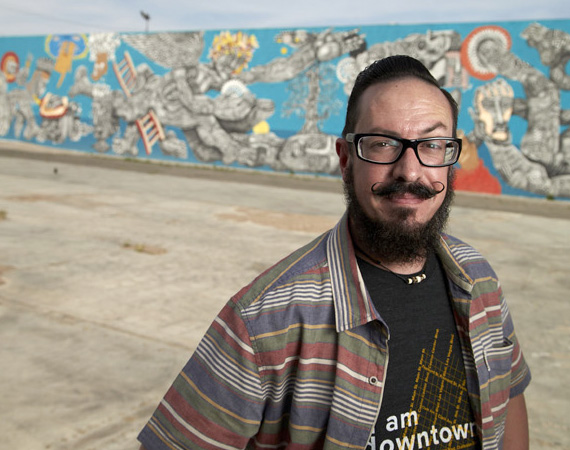 Spend an hour with Brian Paco Alvarez and your chance of sweeping a Las Vegas Jeopardy category significantly increases. You might hear about the exploits of Keely Smith, Louis Prima, or our county's namesake, William Andrews Clark. You might hear how gambling and quickie divorces were born out of economic necessity or how the first gaming license ever issued in the Silver State was to a woman.

Alvarez has earned the distinction of being one of the city's greatest cultural advocates and historians. He is devoted to educating journalists and everyday citizens on the cultural opportunities in Las Vegas.

He entered college as an architecture major but found anthropology better satisfied his curiosity for understanding the events and people that led to the quirky city we have today.
As a curator, Alvarez has overseen collections from Liberace, Siegfried and Roy, and the Neon Museum, among others. One of his proudest moments came when he helped the Neon Museum acquire the old Stardust Hotel-Casino sign. "That is literally an enormous piece of history. It's 300 feet high," Alvarez said.

Today, he works for Zappos, where his primary role is to take care of company archives and collections. But he's also a go-to for both company headquarters and downtown tours. His tours became legendary years ago when he gave them in his free time to the journalists he came across as a curator for the Las Vegas News Bureau. "I always wanted to show them a side of downtown a lot of people wouldn't know about," he added.

Today, Alvarez is also proud to share insights about the Zappos culture. "You have companies that can copy our products, but you can't copy the culture. Ultimately, it's that culture that has been our secret formula."