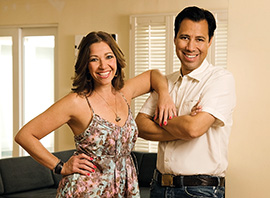 Reza started his career as founder of Scope magazine, which later became the Las Vegas Weekly, and then turned his business skills to the salon industry. In 2008, he and his wife, Staci Linklater, moved their business, Globe Salon, from the suburbs to Soho Lofts at Las Vegas Boulevard and Hoover Avenue. Reza remembers building the space with certain safety concerns in mind. "Our clients were used to a high-end environment," the Las Vegas native said, noting that about 60 percent of them still come from the suburbs. "We had to make an impression on people wary of coming downtown."

Now, his patrons are coming downtown for more than a haircut. He and his wife are considering another salon concept and eyeing restaurant opportunities. "That's part of what we love. Naturally, people get information from their hairdresser. Our staff is like a concierge service for downtown. Three or four years ago it wasn't like that." 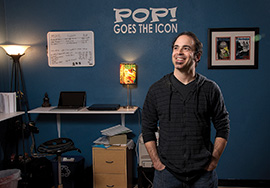 Perez recently gave up his Southern Nevada Water Authority job to focus all his energy on Creation Forge. The printing company complements his Pop! Goes the Icon comic book publishing company, which he launched in 2007.

Through his years in the publishing industry, he learned of the many printing challenges first-time authors face. "Basically you'd either have to go to printers who would do really great work but would take forever to do it or they'd do really great work and overcharge for it," he said. "Most printers do comic books as an ancillary service and don't offer enhancements like copy setting, design consulting, marketing assistance, and those value-added services."

The veteran of downtown has long frequented its arts scene. Now, he says, the area is perfect for engaging both his creative and business sides. 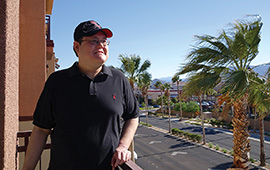 Carroll, an independent software engineer, operates Downtown Project's "Work in Progress" building on Sixth Street. His many clients have included a local slot machine manufacturer, credit card processing company, and GameFly, a video game-by-mail service provider similar to Netflix, to name a few. While he has thought of leaving the city at times, the pay-it-forward mindset among the downtown tech crowd has anchored him for now. "For a long time, I feel like the tech scene was very much scattered across the valley. In the past you'd see these tech groups come up, but it was mostly everybody trying to do a lot of business networking -- it wasn't a true community where everybody helps each other," he said. "Now there's a central point where people come together and meet other like-minded people."

As a child, Wiegand always asked to drive downtown to see the neon lights. 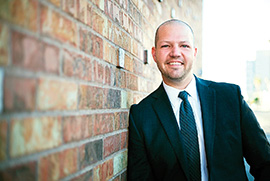 Now he's helping local businesses turn on their lights. Wiegand, executive vice president of acquisitions and sales for Focus Property Group, has focused his real estate efforts on downtown for the past three years. He admits that there are plenty of challenges in operating downtown these days, like landowners who lack the capital to improve their decaying properties but who are unwilling to sell at a reasonable market rate. "There are a lot of places in town where it's easier to make money right now. But there isn't anywhere that I'm more excited or passionate about." 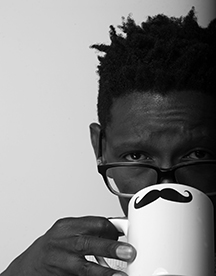 Like many immigrant parents, Botswana-born Wenzel's father steered his son toward a career that could promise financial stability. But Wenzel's quickly learned the 9-to-5 grind at an insurance company wasn't for him and set out to expand his photography business, Lucky's Camera.

Now housed in the Spark LV creative complex on 11th Street near the Huntridge Theater, Wenzel moved to the area largely because many of his photography clients were downtown already. Wenzel says business diversity in the downtown area will only enhance the downtown experience for everyone. "Having industries that maybe have nothing to do with you is a good thing," he added. "Everyone shouldn't necessarily be singing the same tune; you have to have some amount of dissonance to make it a vibrant place."