My Nevada 5: Prostitution in Las Vegas

Professor Lynn Comella hits on the highlights of the city's brothel history — from the rise of Block 16 to the raid on Roxie's.

: This piece comes from women’s studies professor Lynn Comella, whose research examines the intersection of gender, sexuality and popular culture, including the adult entertainment industry. In writing this piece, she drew from the work of Marie Rowley, ’12 MA History.

If you were to walk down First Street between Ogden and Stewart -- just a stone's throw from Zappos' new headquarters in downtown Las Vegas -- you'd find little to suggest that this now unremarkable block was once home to the city's designated red-light district. Long gone are the raucous saloons that once lined street, the railroad workers who frequented them, and the women who made their living by working in the area's brothels.

Back when Las Vegas was still a dusty frontier town, the city's reputation for vice -- gambling, liquor and prostitution -- was a popular draw for visitors. While never formally sanctioned, prostitution was openly acknowledged and tolerated for decades, largely because of its perceived importance to the local economy.

As Las Vegas developed into a modern resort city, tolerance for prostitution waned and efforts to "clean up" Las Vegas' image gained traction. The desire to attract middle-class tourists, coupled with the growing presence of the federal government in the region, meant that by the early 1940s concerted efforts were underway to rid Las Vegas of prostitution, a process that historian Marie Rowley expertly documented in her master's thesis, So Much for Fond Five-Dollar Memories: Prostitution in Las Vegas, 1905-1955.

Today, prostitution is illegal in Clark Country, but once upon a time it existed in a regulated zone of tolerance, symbolizing Las Vegas' libertarian ethos and its identity as the West's "last frontier town."

Here are 5 facts about the places, people, and events that shaped the history of prostitution in Las Vegas.

In 1905 the railroad auctioned parcels of land to speculators, investors, and prospective business owners in what would become Clark's Las Vegas Townsite. The 16th block of the new townsite was designated for saloons, which meant that the lots sold quickly and garnered the highest bids. Tents went up almost overnight and permanent structures soon followed--as did prostitutes. 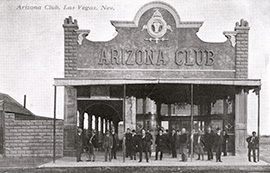 The block attracted railroad workers and travelers, and, eventually, dam workers from nearby Boulder City eager to let off steam on payday. Some of the earliest photos from Block 16 are of men standing alongside the long and impressive bar inside the stately Arizona Club, the centerpiece of the block. Although efforts were made periodically by police and city commissioners to address what Las Vegas Age described as the "disgusting and lawless conditions" on Block 16, many in the community felt there were benefits to restricting vice to an area where it could operate under the watchful eye of officials. In 1942 prostitution was pushed out of the area, and Block 16 was closed for good.

There is very little information available about the women who lived and worked on Block 16. The 1910 Census suggests there were at least eight prostitutes residing on the block. By the 1920s and 1930s, when the block was in its heyday, the number had grown to between 20 and 40. The women worked as independent contractors, renting their rooms on a weekly basis and keeping all their earnings. One of the more successful proprietors on Block 16 was Pilar Santa Cruz, a Mexican immigrant who opened the Red Front Saloon sometime in the 1910s. When the block closed, she converted her establishment into a rooming house. When she died in 1947 she left behind a sizeable estate and a house in Los Angeles.

Not everyone was happy about the existence of prostitution on Block 16. The first serious campaign to stamp out prostitution was initiated by Fannie Ryan, the wife of state Sen. Frank Ryan, who lodged a formal complaint with the city in 1936, arguing that the brothels were a "public nuisance." Mrs. Ryan owned property near the block, and thus had a financial interest in the area. By the 1930s, Block 16 was less isolated from the surrounding businesses in the area and the people who patronized them. As the city grew, the line between "respectable" and "objectionable" activities was being redrawn, marking the beginning of a shift in public opinion regarding prostitution.

During the 1930s and 1940s, a more powerful entity, one with considerably deeper pockets than ordinary citizens, was putting pressure on city officials to "clean up" Las Vegas' image as a haven for vice. The Hoover Dam project, New Deal funding, and military spending provided added financial incentives for city officials to address prostitution. This was especially true during World War II, when the Army requested that the governors of Western states do everything in their power to suppress prostitution near Army bases, including the Las Vegas Air Gunnery School. This request, combined with "social hygiene" measures aimed at preventing venereal disease, meant that curbing prostitution in Las Vegas was now a concern for state, federal and military officials, upping the ante for local representatives to act.

Despite the closure of Block 16 and wartime efforts to stem prostitution, Las Vegas' brothel prostitution continued well into the 1950s. 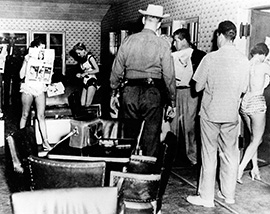 Especially resilient in the face of repeated opposition was Roxie's. Located in the Four Mile area, Roxie's opened in 1946 and was managed by Eddie Clippinger and his wife, Roxie. In 1950, newly elected District Attorney Roger D. Foley made eliminating vice one of his top priorities. Foley found an ally in Hank Greenspun, the founder of the Las Vegas Sun, who offered Foley a platform to advance his anti-vice agenda. The end for Roxie's came in the form of a federal raid in 1954. A series of articles published in the Las Vegas Sun exposed a network of bribery and corruption between brothel owners and county officials, effectively signaling the end of brothel prostitution in Clark County.

“The Big Questions: Online Gambling and Sports Wagering” will help identify a responsible path forward for policymakers and regulators nationwide.
A Stable Foundation During the Turbulence of Pandemic

A Stable Foundation During the Turbulence of Pandemic

How UNLV’s School of Public Health took center stage in the coronavirus crisis.
Covering Up to Cut Virus Down

Covering Up to Cut Virus Down