Greenspun College of Urban Affairs alumna talks about covering a devastating mudslide and what future journalists need to know.

Journalist Hannah Birch, at computer, in the newsroom of The Seattle Times during the Washington governor's race in 2012. She was part of a team that went on to win a Pulitzer Prize for their breaking news coverage. (Courtesy of Joni Balter)

It was a slow Saturday in The Seattle Times newsroom March 22, 2014, until Hannah Birch spotted a state trooper's tweet. There was a mudslide in Snohomish County, Washington.

Birch, '12 BA Journalism & Media Studies, quickly alerted her editors. The mudslide turned out to become one of the largest disasters in the state, killing 43 people and destroying dozens of homes. 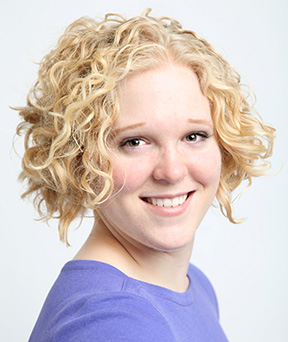 A news producer at the time, Birch was part of the The Seattle Times team that won a 2015 Pulitzer Prize for breaking news reporting with its digital coverage of the Oso mudslide.

Birch was charged with working on the homepage of the newspaper's website that day. With few people in the newsroom, Birch, just 22 at the time, got a lesson in making swift judgment calls and the value of waiting on facts before being the first to break the news.

Ryan Blethen, assistant managing editor/digital of The Seattle Times, said the Greenspun College of Urban Affairs graduate was in a tough spot. The size and impact of the slide weren't immediately clear, and details were hard to confirm because it occurred in a remote area an hour northeast of Seattle. Birch worked with editors to get the best information out to readers, updated social media posts, and wrote a breaking news alert. She created the centerpiece on the homepage that dominated the newspaper's website for weeks.

"Hannah was also a star as the story unfolded throughout the following weeks," Blethen said. "She was a driving force behind a page memorializing the victims. The assignment was taxing because not only did she have to build it, information about the victims was changing daily. And she spent long hours faced with the reality of what befell the people living in the path of the landslide. It was mentally draining.

"Hannah was a pro and a great example to her colleagues. As troubling as it was to work on the victims' page, she held it together and managed to push out information through social media and do a stellar job on her homepage shifts. The digital team did an outstanding job with this story, and Hannah was one of the major reasons we won the Pulitzer."

Now a Web producer in New York for the investigative news site ProPublica, Birch, reflected on covering the mudslide and imparted advice for students thinking about a journalism career.

When the news broke

I was working a normal homepage shift on a Saturday morning with a metro editor and reporter. It was a standard, slow weekend day. Most of what I was doing was keeping an eye on the homepage and making sure news wasn't breaking somewhere. I saw a tweet from a state trooper that there was a mudslide. It happens frequently at that time of the year and it usually wasn't a big deal. I passed the info to the metro reporter. We decided to send a reporter when we realized it was a bigger deal than other mudslides that had happened.

It didn't feel like breaking news right away. We didn't know how serious it was until other media got there and our reporter got there. It took a couple of days for the magnitude to sink in.

Accuracy versus breaking the news first

There was a span of time when the editor and I had a hard time confirming numbers. I looked at numbers we could confirm. It seemed anti-climactic. I knew it was not the full arc of what had just happened.

It's one thing to see it on Twitter and quite another to publish it on the homepage. I didn't have an editor over my shoulder saying we need to go or wait. It was very much a judgment call. It was just a matter of me sitting there with the headline field and publish button, working with the executive editor and a metro editor on what we felt comfortable publishing. We were in that moment of wanting to get information out quickly but also taking a minute to making sure all of it was confirmed. When I raised those concerns with editors of the day, they were in agreement with me to make sure what we were doing was accurate.

Thinking beyond the headlines

(Homepage production) is such a detailed-oriented job. It's mechanical. But, it's days like that, you realize you are writing about people and the sometimes really terrible things that happen to them.

There were so many moments covering that disaster, there aren't words for it. You realize all of these people have been impacted in a terrible way. You think maybe this could have been prevented or wonder why homes were built there.

On being a part of the winning team

I felt lucky watching the staff at The Seattle Times mobilizing to cover this terrible story. I felt lucky to be able to learn from these people and to be surrounded by people who care so much. The award feels secondary to what that experience was like.

I'm so grateful to the Seattle Times. I started as copy editing intern one summer and they extended the internship a couple of times.

I had graduated at that point, so I could stay indefinitely, but there weren't any jobs on the copy desk and my internship was ending. A spot opened up on Web team. I didn't know anything about Web production, but I asked them if I could try it and they said yes. I had no idea until that moment that I would be interested and good at Web production. It's been an extremely good fit.

As an intern, in my experience, almost everyone says yes if you want to try something.

While covering the mudslide, I remembered sitting in journalism class thinking someone else would make those decisions and judgment calls. I was realizing this is exactly what they were talking about in ethics or media law classes. It was slightly terrifying to be the one making the decisions, but obviously I'm grateful I had the knowledge to begin with.

There's a fantastic future for young enterprising journalists. I never quite understood the doomsday mentality for journalism jobs.

Some of the changes are making opportunities for students with new skillsets. My advice would be to when you are in school don't be lulled by the sense of academia; focus on building skills that you can demonstrate. I think this has changed a little but, I know when I was in school, the emphasis was on being versatile. I think that is important, but it can come at the expense of being good at one thing. Specializing is important.

I really like copy editing and got an internship as a copy editor and it turned into a job as a Web producer. I didn't know in school that's what I wanted to do. But once you get in the door, it's easier to build your skillset on the job.

When you're starting out

I think caution is probably the biggest thing to impart. It's important for young, inexperienced journalists to remember you're surrounded by people who can help you. You have someone talk you through the situation. It was comforting to be able to be around people who cared about it as much me.