The cumulative giving of these honorees surpasses $23.4 million to enhance UNLV programs.

Generosity and compassion are qualities that unite us and make us stronger. By those standards, this has been a strong year for UNLV.

Among the thousands of people and organizations who supported the university through this notable year are its 2020 Palladium Society awardees: philanthropic champions whose lifetime giving to the university reached or surpassed $1 million.

The UNLV Foundation is pleased to announce its newest slate of Palladium honorees: Andrew and Peggy Cherng; Reg Grundy and Joy Chambers-Grundy; Sam and Lexy Lionel; Aldo and Dawn Madrigrano; and the San Manuel Band of Mission Indians.

Together, their cumulative giving to UNLV surpasses $23.4 million in philanthropic contributions.

“Private philanthropy is so important to our continued growth and success as a university, as it provides the support needed to launch new ideas and to make already great programs even better,” says UNLV President Keith E. Whitfield.

“This year’s Palladium awardees are contributing in ways that will benefit a wide range of disciplines and help our students achieve their goals. Their support could not be more timely or relevant, and I am tremendously appreciative of their commitment to UNLV.”

For more than 25 years, the UNLV Foundation has recognized its top donors through membership in the Palladium Society. This year’s awardees represent a diverse range of philanthropists. They include business leaders and entertainment impresarios; immigrants and tribal members; a legal legend, an officer of the British Empire, and at least several diehard Rebels fans.

“I am delighted to welcome our newest honorees,” says UNLV Foundation Chairman Diana Bennett, who has been a Palladium Society member since 2008. “They are not only providing vital resources to the university, but also giving us inspiration and hope for a brighter future.” 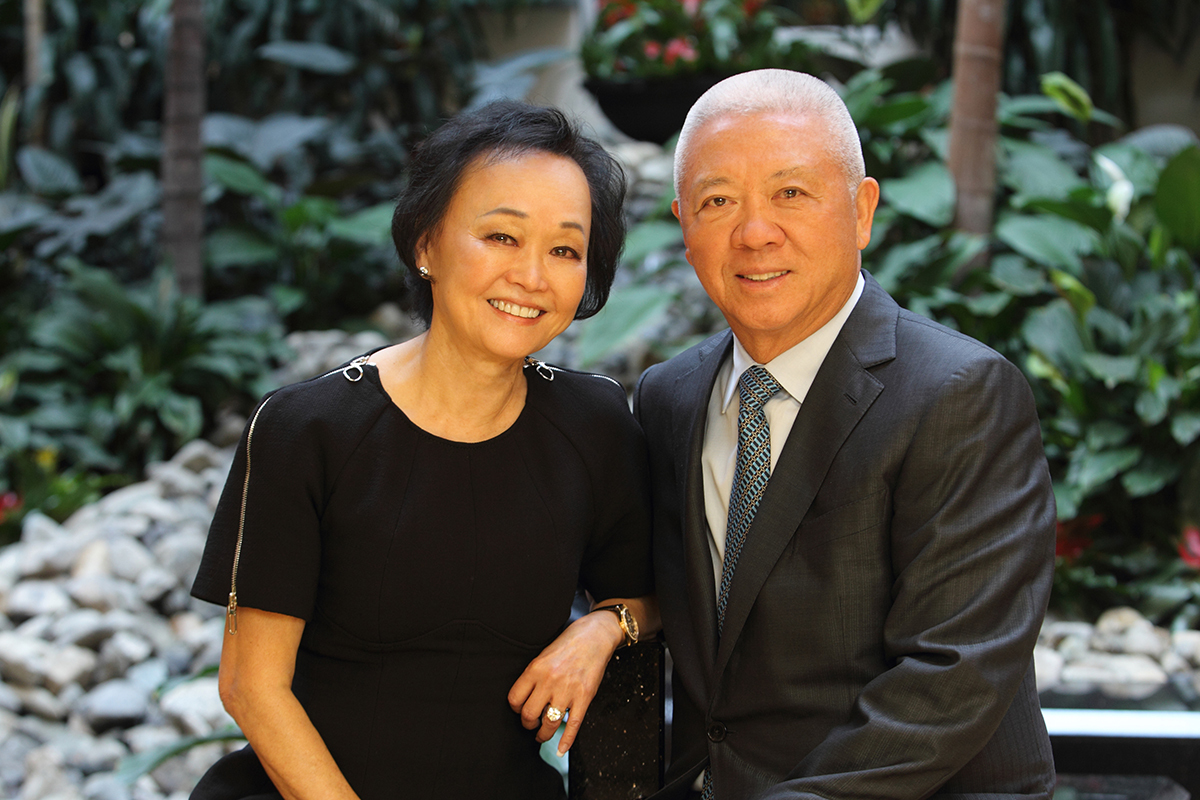 Andrew and Peggy Cherng, co-founders of Panda Restaurant Group, believe in creating better lives for others through education and giving. Their landmark $5 million gift to UNLV will establish a first-of-its-kind Fast-Casual concentration in the William F. Harrah College of Hospitality. Immigrants from China who parlayed a single family restaurant in Los Angeles into a global business empire with more than 2,200 stores, the Cherngs are creating pathways for students to achieve meaningful careers in a growing sector of the hospitality industry.

In recognition of their generosity, the Andrew and Peggy Cherng Deanship was established in perpetuity at the College of Hospitality. Stowe Shoemaker is the first to hold its title.

Joy Chambers-Grundy and the late Reg Grundy, who was named an Officer of the British Empire in 1983, are icons of Australian and international media. They married and became business partners in the early 1970s and together created what at one time was the largest independent entertainment production company in the world. This spring, thanks to their landmark gift to the School of Integrated Health Sciences, UNLV established the Chambers-Grundy Center for Transformative Neuroscience.

The Center is a think tank and research enterprise devoted to finding improved treatments for patients with Alzheimer’s disease and other brain disorders. The Chambers-Grundy’s gift also established an endowed chair for UNLV’s Department of Brain Health held by Dr. Jefferson Kinney and an endowed professorship held by Dr. Jeffrey Cummings.

[More on Joy Chambers-Grundy and the late Reg Brundy's philanthropy]

Sam and Lexy Lionel establish a legacy of legal education

Known as “The Dean of the Nevada Bar,” Sam Lionel served for 30 years on the Nevada Board of Bar Examiners and was a founding partner of the legendary local law firm, Lionel Sawyers & Collins. Lexy Lionel is founder and owner of the award-winning company Nannies & Housekeepers USA.

Aldo and Dawn Madrigrano were keystone supporters of UNLV’s Fertitta Football Complex, home to the Madrigrano Family Sports Medicine Center. They have been loyal Rebels fans since their move to Las Vegas from Wisconsin in 2012, and recently established the Madrigrano Family Endowment for Academic Excellence to support student-athletes.

Aldo Madrigrano is the former co-owner and CEO of Beer Capitol Distributing, a business started on the heels of Prohibition by his grandfather, who came to the U.S. from Italy in 1905. Before its sale in 2016, it was the largest beer distributor in Wisconsin and the 20th largest beer wholesaler in the country. 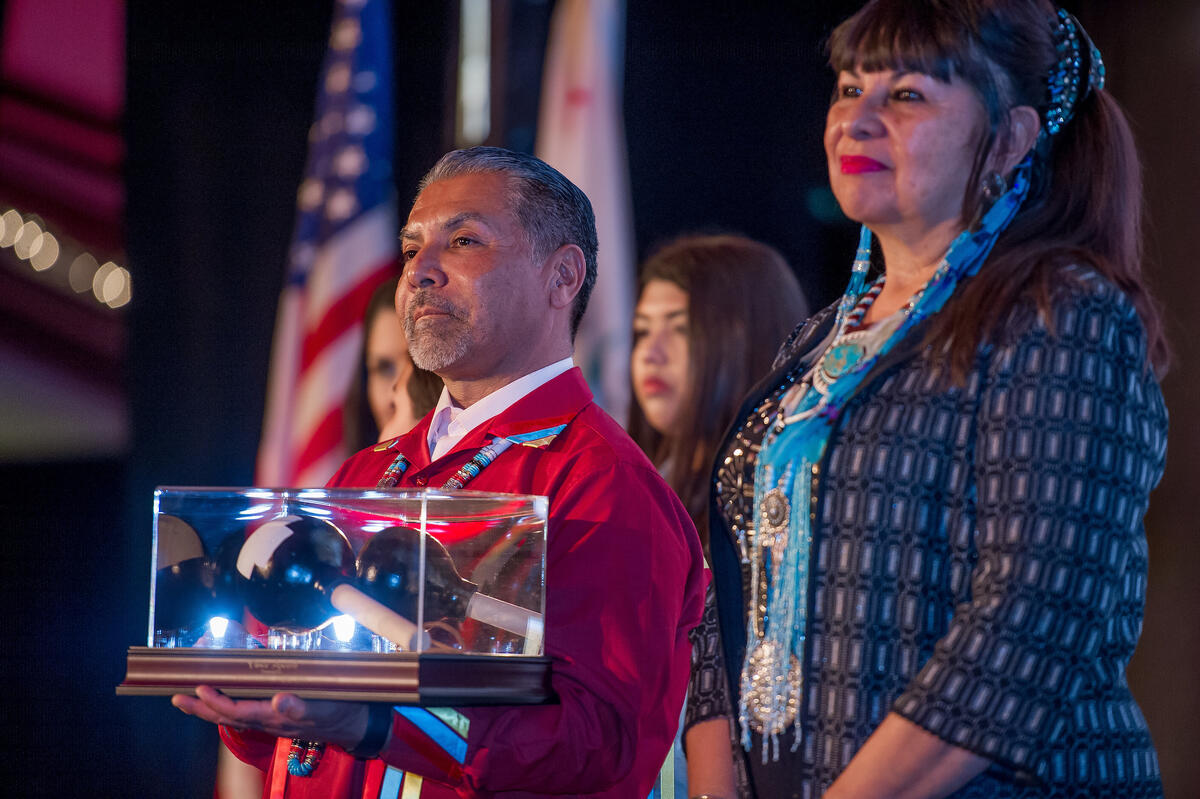 This past spring, the San Manuel Band of Mission Indians reached an historic agreement with UNLV to support both the Harrah College of Hospitality and the UNLV Boyd School of Law. Their $9 million commitment positions UNLV as a world leader in education related to tribal gaming operations, economic development, and law. It will create an endowed chair in Tribal Gaming at the College of Hospitality, and support faculty positions, a scholarship for an LL.M. student, and an annual workshop on emerging issues in Native American Gaming at the law school.

The Yuhaaviatam (San Manuel Band of Mission Indians) are one of several clans of Serrano Indians, the indigenous people of California’s San Bernardino highlands and valley. The reservation was established in 1891.

“Our 2020 Palladium awardees are a beacon of light during a particularly stressful time,” says Bennett. “We look forward to coming together as a community to recognize them and to celebrate the extraordinary influence of their philanthropy on UNLV.”

[More on the San Manuel Band of Mission Indians' philanthropy]

The Hazards of Research: How Risk Management Partners to Keep the Community Safe

The Hazards of Research: How Risk Management Partners to Keep the Community Safe

UNLV teams up with the region's Weapons of Mass Destruction Working Group.