My Nevada 5: The Jackson Street Five

This section of the city was integrated and flourished in days of overt segregation along the Las Vegas Strip. Oral historian Claytee White takes a look at the businesses that formed the backbone for this community.

This piece comes from Claytee White, the inaugural director of the Oral History Research Center for UNLV Libraries. She contributed to the Libraries' digital collection, Documenting the African American Experience in Las Vegas. She also is one of five founders of the Las Vegas Black Historical Society Inc. (Photos courtesy of the UNLV Libraries Special Collections)

The Westside -- our city's historic African American community -- spanned from Bonanza Road north to Owens Avenue and from A Street west to H Street. Within this small community was a business corridor referred to as Jackson Street (even though it is really named Jackson Avenue). Over the burgeoning period of 1940s to 1969, businesses also peppered D, E, and F streets. Five of the most successful business types were restaurants; beauty and barber shops; night clubs with gaming; hotels and boarding houses; and grocery stores.

These businesses were integrated from their beginnings unlike those in white neighborhoods. Thus Jackson Street flourished until full integration was achieved. And then, as all over the country, Jackson Street succumbed to the success of Civil Rights protests.

This look at Jackson Street was gleaned from oral histories, conducted over a 20-year period, that are now part of Documenting the African American Experience in Las Vegas, a digital project from the Oral History Research Center at UNLV Libraries.

These businesses filled the needs of Westside residents, allowing Jackson Street to flourish. The community was filled out with the bowling alley, insurance company, and clothing stores. And today, the Westside still serves as is the spiritual mecca for the Las Vegas black population.

In its heyday, Mattie's Cafe was the place to go for food that reminded blacks of the greens and peach cobbler back home in places like Fordyce, Ark., and Tallulah, La. Ruth Eppenger D'hondt worked in this restaurant as a young girl as her mother operated the family business. Ruth served the succulent foods to everyone including UNLV students, especially athletes. "The coach would bring them over and they would buy a meal ticket so that they could be fed while they were getting their education."

Nightclubs dotted the business area and included The Brown Derby, The Town Tavern, the Louisiana Club, and Cotton Club. 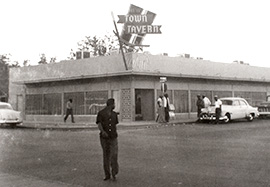 In the mid 1950s Lucille Bryant, a migrant from Tallulah, and her friends had to carry their dress shoes as they walked from club to club on a Saturday night. The unpaved streets, covered with rocks would ruin dancing shoes. Bryant and her husband enjoyed dancing after working all week in the back-of-the-house of the Las Vegas Strip.

When world-renowned entertainer Josephine Baker, came to town to perform at the Last Frontier in 1952, her first stop was the Westside to find a beauty shop and to locate the president of the local branch of the NAACP. 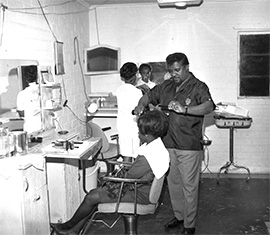 Black beauty shops are essential entities for those with traditional black hair textures. African American barbershops were then and still remain locations of political discourse and a masculine haven. The atmosphere in those establishments allowed Baker to entice many blacks to assist in her short but successful stint of integration of the Frontier showroom. The city was then among the most segregated in the country. Baker's contract allowed blacks to sit at her reserved tables at each performance, so she headed to the barber and beauty shops to recruit recruited them.

The Carver House, the Jackson Hotel, the Cove, and small community boarding houses provided a resting place for black tourists and entertainers. The unforgettable Nat King Cole, among many others, stayed at Mrs. Harrison's boarding house. Hannah Brown remembered walking with her friends up and down the sidewalk waiting until King came out to smoke a cigarette and engage them in conversation. Cole always asked about their grades. Soon Hannah conveniently would have her report card handy. Brown was a star student who became a regional manager for Delta Airlines, a community advocate, and president of the Southern Nevada Urban Chamber of Commerce.

Of course, community grocery stores sold foods, supplies, and household staples but in the 1950s, these shops also provided jobs for kids in the Westside community. 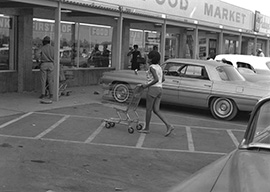 Much like barber shops, they also served as a communication hub. Jackie Brantley remembers purchasing candy from Mrs. Johnson's store. "You would walk into a store and think that you were in wonderland because she had huge see-through jars of candy." In 1972 Brantley was among the first black women to enter mid-level management jobs on the Las Vegas Strip.

Tips from Risk Management & Safety help ensure no one gets left out in the cold this holiday season.