UNLV looked in its own backyard to find a coach to take on the challenge of turning around the football team.

There's a postcard-perfect view of the Las Vegas Strip out one of the windows of Tony Sanchez's corner office in the Lied Athletic Complex. But as UNLV's new head football coach starts talking recently, he points out the other window, the one that overlooks campus and the Las Vegas suburbs beyond. That view means home to him.

"I left here last night, right at 5:15 -- something I won't be able to do very often," Sanchez said, pointing out that other window. "I jumped in my car and headed to one of my kid's Little League games. And I was sitting out there, just one of the parents."

He's embraced this community as his own; now it's time for the community to do the same for its hometown college football team, he said.

The former Air Force kid started his coaching career in 1996 as a graduate assistant at New Mexico State University, where he had played wide receiver. After a couple of high school gigs, he became a head coach for the first time, turning around a moribund program in San Ramon, Calif. That success caught the eye of Bishop Gorman High School in Las Vegas.

With Sanchez leading, Bishop Gorman reached unprecedented heights in Nevada high school sports: an 85-5 record, state titles in each of his six seasons, and a No. 1 national ranking by USA Today. The private high school's winning teams brought in the donations as well as very well appointed athletic facilities.

Only a handful of coaches have ever made the jump from high school to Division I head coach. The last one to do it -- Todd Dodge -- had a record much like Sanchez's when he took over at the University of North Texas in 2007. Dodge had racked up four state 5A titles in high school football-mad Texas. His only loss with the Southlake Carroll High School in five years had been a 2-point defeat in the 2003 title game. But Dodge's record in just under four seasons at North Texas was practically the opposite: six wins, 37 losses.

But there was something Dodge didn't have: Las Vegas to sell.

"I can talk to parents about living here in Las Vegas," Sanchez said. "We have 310 days of sunshine a year. I'll sell that. You sell the fact that you're three and a half hours from Southern California, five from northern, eight from Phoenix. Two million people right here. It's easier to recruit to a warm weather area." 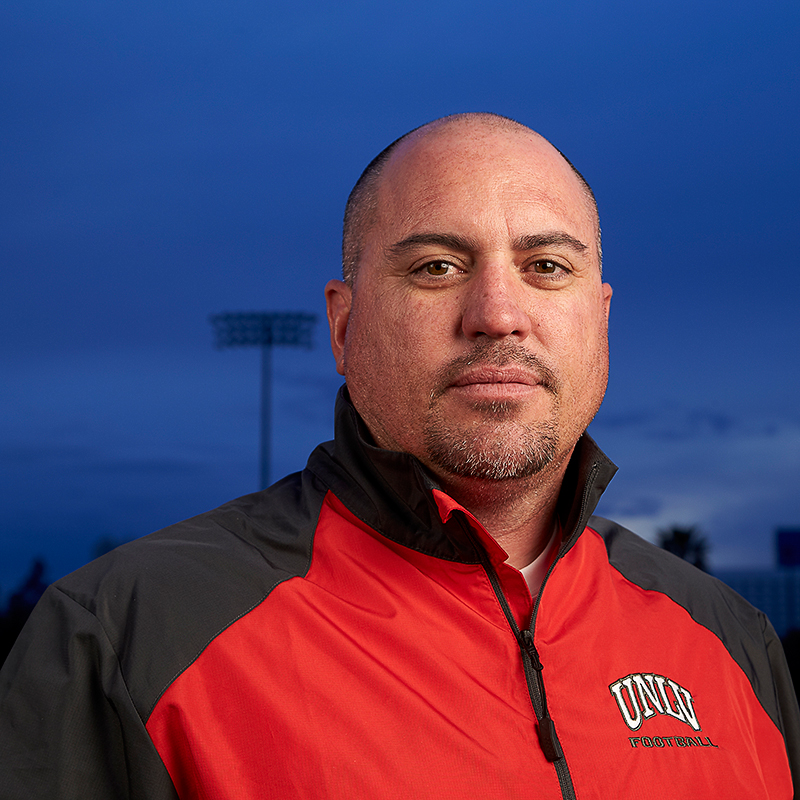 Sanchez talks often about a football program's mission -- "winning games" and "developing young men." The latter, he said, doesn't differ much between high school and college student-athletes. "We're getting younger as a country. Just 20 years ago, if you were 20 years old, you'd already have a job. Today, people are getting married later and starting careers later in life.

"And there's some immaturity that comes with that. So we have to teach maturity."

Sanchez sometimes points to Houston Texans superstar defensive end J.J. Watt's comment about the relatively short time he'll play football: "I have the rest of my life to have fun and drink beer," Watt has said.

The lesson in that, Sanchez said, is learning to make sacrifices for success. As coach, that means becoming involved in even the minute details of the program: "If you're not willing to become intimately involved in the everyday aspects, you're not going to change the culture."

Before he took the job he had three questions he needed to answer. "Number 1 was, 'Do I truly believe we can win at UNLV?'" Sanchez said. He took into account Las Vegas' size, location, and TV market. He studied post-college economic opportunities for student athletes. His answer: he could do it.

"Secondly, I thought, 'Would I be able to live with myself if I don't take the job? Is that something I'd be OK with?'" He wasn't.

Sanchez's hiring brought a lot of excitement and national media attention. Around town, came a lot of pats on the back and well wishes.

"(But) that means nothing if you're not willing to jump in," Sanchez said. "Saying you're excited is great -- then get (yourself) in the stadium. We need facilities here, right? Then donate and support it."

Sanchez pointed to past Mountain West Conference members Utah and Texas Christian, where investments were made before those schools jumped to larger conferences.

"If you look at (Mountain West Conference member) Boise State, and the success they've had and the revenue they've generated," Sanchez said, "it wasn't just great coaching; it was community support."

The Vegas Effect program guides student-athletes through the uncharted waters of marketing their name, image, and likeness.

Kevin Kruger, son of former coach Lon Kruger, is ready to put his stamp on the Runnin’ Rebels as the team’s new leader.