UNLV researchers team up with Las Vegas police department to study the effectiveness — and drawbacks — of officer body cameras.

A police shooting is often over in only a few seconds. But crucial details are lost forever. Officers, paralyzed by adrenaline, can't recall exactly what they said or how many shots they fired. Witnesses, if they exist, often give conflicting statements.

How do you protect an officer who acted lawfully, but is accused of lying? Or how do you get justice for a victim who was wrongfully killed by the police?

As a national debate about the need for police transparency exploded last summer, UNLV researchers were quietly in the middle of an unprecedented study that could change how departments across the country use technology to investigate -- and hopefully prevent -- officer-involved shootings. 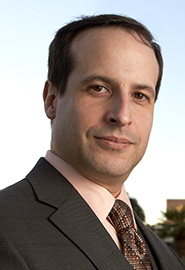 Half of the 400 Las Vegas officers in the study have been randomly assigned to wear body cameras mounted on their shoulders. The other half comprise the control group and won't wear cameras.

It's the largest study of its kind, Sousa said. Similar research in Rialto, Calif., studied much fewer officers. "There are other studies going on, but not to our level of randomized assignment," Sousa said. "This is really the gold standard in determining if there's an effect."

And it couldn't come at a more important time. Departments nationwide -- and the federal government -- are clamoring for such research to determine how to use cameras in their own agencies. "There will be a lot of eyes focusing on the results of this study," Sousa said.

While the study is focusing on the effects cameras have on use-of-force incidents and citizen complaints, Sousa will try to establish context for their use. By analyzing the cameras' influence on day-to-day interactions between officers and citizens, the researchers hope to address the potential drawbacks to their use.

Will people be wary to speak with police if they know they're being recorded? Will officers become more legalistic -- writing more citations rather than warnings or diffusing situations with tact rather than arrests -- because they're reluctant to be recorded using discretion? Police could also become less proactive because of the cameras, Sousa said. If an officer sees suspicious activity, for example, he might choose to ignore it rather than have his reasons for approaching a situation scrutinized later.

"We know from the last 20 years of research that when police are more proactive, that's the best way to manage problems in a community," Sousa said. "There's concern that officers wearing cameras might revert to a more reactive mode."

There are privacy concerns, as well. An officer's day typically involves managing family disputes, responding to traffic incidents, or entering homes when someone is distress. Many people who need police are vulnerable or coping with highly stressful situations.

"We have to remember, the cameras are capturing all of that as well," he said.

From Skepticism to Enthusiasm

The study was financed by the National Institute of Justice (NIJ), which awarded Virginia-based research firm CNA a nearly $550,000 grant which covered the UNLV research as wells as helped purchase Taser International cameras and install the hardware required for storing large data files. CNA's previously helped the Las Vegas police conduct the extensive research needed to revamp the agency's deadly force policies a few years earlier. UNLV also has a long research relationship with the local department. Sousa's past research includes an analysis of "saturation" teams, which operate in the city's most crime-ridden neighborhoods - making the university an ideal fit to contract with CNA.

The study began in March 2014. Las Vegas police Lt. Dan Zehnder, who is overseeing the department's camera program, said officers were initially skeptical of the new technology, which isn't mandatory. But in the aftermath of the officer-involved shooting death of Michael Brown in Ferguson, many officers realized that cameras could vindicate them in a similar incident.

"Once Ferguson happened, nobody wants to be the next cop who isn't wearing a body camera in that situation," Zehnder said. "We went from 90 (study volunteers) to the full (amount) in six weeks."

Sousa said the data collection will continue to at least October, when the last group of officers finish their year with a camera, and the full report will eventually be published by the National Institute of Justice. Anecdotal evidence from officers has been positive. "Officers feel very comfortable carrying the camera. They feel it helps them prevent a lot of incidents," Sousa said. "For example, if you see someone about to act up, and the person realizes they're on camera? The person tends not to act up."

The cameras are already helping to clear officers. Zehnder said there have been 21 internal complaints against officers wearing cameras, and 20 officers were cleared immediately. The last complaint is under review.

Why would a citizen complain about an officer, knowing the officer is recording? Zehnder said a person's perception of an incident, especially when emotions are high, is often different from reality. A local principal, for instance, was ticketed after speeding in a school zone. She later accused the officer of being rude to her, but the video showed the officer's conduct was firm but polite, he said.

"Cops know that 99.9 percent of the time, they're doing the right thing," Zehnder said. "But citizens don't get to see (that)."

Zehnder said the department will be adding more cameras. Between new budget allocations and grants to the department, the number of officers wearing cameras will grow to 760 in just a few short years, up from the current 200.

"When body cameras are rapidly deployed, my prediction is you'll see a vast reduction in complaints against officers and more understanding that, if somebody posts a video on YouTube, the police department will turn around and post the real deal," Zehnder said.

Sousa said there are other potential benefits, such as reducing the cost of lawsuits against police and providing clear evidence for prosecutors to use at trial.

The key for a department's success is adopting clear, strong policies. How long will footage be stored? Is the footage a public record? How do you protect citizens' privacy rights? What happens when an officer fails to turn the camera on? Solid research will help answer those questions.

"Once departments have clear policies established, I think the benefits will ultimately outweigh any disadvantages," Sousa said.