When Major League Baseball fans are asked to imagine the person on the pitcher’s mound at game four of the World Series, a 7-year-old girl probably doesn’t come to mind.

But that will be the case Saturday when young Hailey Dawson of Las Vegas throws out the opening pitch in the showdown between the Los Angeles Dodgers and Houston Astros.

Although Hailey’s pitch is only ceremonial, there’s nothing trivial about how she got there. Her fastball is powered by a robohand, custom-built by another inspirational young woman, Maria Gerardi.

The blue and gold 3D-printed flexihand is the eighth — and soon-to-be most famous — that Gerardi, a UNLV engineering graduate student, has designed and built for Hailey.

“Watching Hailey out there — she’s just a little girl doing her thing and having fun — proves to anyone that there are no excuses; anything really is possible,” said Gerardi, reflecting on Hailey’s journey to Major League Baseball. “Knowing I was able to play a part in that, I’m so humbled. It’s that a-ha factor; this is what I want to do with my life.”

Due to a rare condition called Poland Syndrome, Hailey was born without a right pectoral muscle; her right hand is missing three fingers and her thumb and pinky also are undeveloped.

Three years ago, Hailey's mom collaborated with UNLV College of Engineering students and faculty to design and build a 3D-printed prosthetic hand from scratch. Hailey, a big fan of baseball, went on to deliver opening pitches for the Baltimore Orioles and the Washington Nationals. Now — in addition to throwing out the first pitch in the Oct. 28 World Series game — she has invitations to pitch next year by all other Major League Baseball teams.

The first several robohands, which were built by using existing online designs as a guide, were prone to breaking easily. Gerardi, who is slated to graduate with a master’s degree in biomedical engineering in spring 2018, came on board a few months into the project, after the first workable model was built.

Gerardi's own journey on the project began in a high school classroom, where she fell in love with biology her senior year. But it’s possible it was always in her genes: “On my mom’s side of the family, everyone’s an engineer — all the guys — and my grandpa would make jokes that he wants a ‘girl engineer.’ So he was ecstatic when I said I was going to get my master’s in engineering.”

The Michigan native completed her undergraduate biology degree at Wayne State University in Detroit, then took a couple years off and worked at a call center while debating medical or dental school.

One day, an older acquaintance encouraged her to move and explore while she’s young. With relatives already in Las Vegas, she made the move five years ago and was so enamored with the city that she decided to stay and enroll in UNLV’s College of Engineering.

When she spotted a flyer seeking students to help with Hailey’s hand project, she knew she was in the right place.

“It caught my eye mainly because I love kids,” she said. “They said they wanted to help [Hailey] do activities that everyone else can do. Growing up, I remember playing baseball, like Hailey likes to do.”

Gerardi, who’d previously been unsure of her exact path in engineering, was hooked after meeting Hailey. “Watching her use the hand for the first time, if I had any doubts about what I wanted to do, this made me realize ‘This is it,'" she said. “The look on her face and how happy her parents were, it was a for sure ‘A-ha!’”

A typical day in the lab involves Gerardi using computer software to make ongoing modifications to the robohand as Hailey grows. Gerardi also has created an original design for another local child whose partially formed hand forms a wider fist than existing models can accommodate.

Each robohand takes at least a week to make. The process requires a mix of biology and kinesiology know-how (to understand how the human body and muscles involved in various grasping motions work), along with math (to calculate part dimensions and build 3-D models) and engineering (to design components that are small yet thick enough to not break).

The hand uses no electronics. Rather, when Hailey flexes her wrist, the fingers move in or out of a grasping shape.

Hailey started three years ago at 60 percent of a full-sized (100 percent) model, and is now at 83 percent. Gerardi has made eight hands for her so far, including two — an original and a nearly-identical backup — for the World Series. Hailey likely will need a new hand each year as she grows. Each hand costs about $200 in supplies, and Hailey’s mother, Yong, carries a toolbox to adjust tension screws or reattach fingers to joints on the fly.

Gerardi’s model — called M1, for her first name — can be adjusted to fit anyone without a fully-formed hand by taking a photo of the wearer’s hand, calculating measurements, and digitizing them through the computer software.

For now, the hand is for general use (holding bags, occasional writing, etc.) and Hailey hasn’t been picky about design — usually they are hand-painted with a theme such as patriotic colors or a team logo for opening pitches. For Hailey’s visit to the White House, Maria even applied stick-on nail polish. Her main request? A gauntlet, or arm covering, that affixes the hand to her wrist and provides enough space to get autographs from her favorite Major League Baseball players.

But the engineering team of undergraduate and graduate students that Gerardi leads continues researching ways to improve the design in case Hailey wants hands for specific purposes, such as writing or other tasks/sports as she gets older.

Initially, Gerardi and another graduate student, Jordan Harris, worked to move the thumb because Hailey couldn’t grab larger objects very well and it got in the way when pitching. In the last year, Gerardi has added an adjustable thumb and fingertip ridges so Hailey can obtain a better grip on objects.

Building on Harris’ exploration of a method to improve individual finger dexterity and grip without the use of electronics, Gerardi is writing her thesis on her quest to build a universal hand that has an adjustable thumb, which other online models lack.

But Gerardi, who is also in the midst of planning for her wedding in two weeks, has been working feverishly to design, assemble, and hand paint Hailey’s special World Series model.

“I was supposed to defend my thesis but I put it off because this is a little bit better,” she said, chuckling. Gerardi said she’s not an emotional person, but “watching Hailey with the hand, writing and throwing, just to see the impact of it and being able to watch Hailey grow with the project, it just got me. It’s a great feeling to know my three years of hard work have led here. Not everyone can say their work has been broadcast to millions.”

In fact, Gerardi’s dream after graduation is to create a non-profit that will allow her to help other children like Hailey.

“What I’ve learned here at UNLV is that anything is possible really,” said Gerardi, adding that her 85-year-old grandfather has her bring her latest M1 model each time she visits home. “He’s very proud he got his girl engineer.” 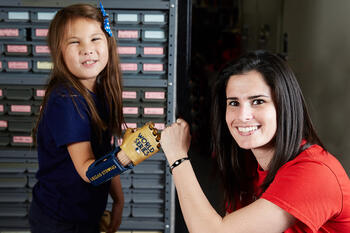 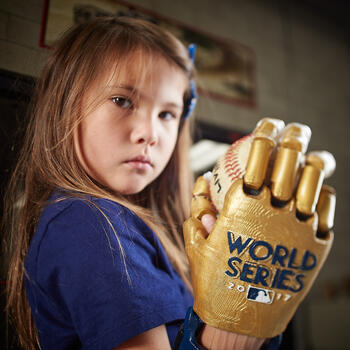 A first-gen trailblazer, Irwin Munoz is becoming a physician to help others navigate the healthcare system.

UNLV's new chief diversity officer on her immigrant experience, and the inspiration she finds in her rescued greyhounds.