It's like the old potato chip commercial: Once he gets started, he just can't stop. William Donati reads one article and then another. He gets a tip on yet another source to interview. That call leads to another when something is mentioned that gives him another idea for yet another story. Maybe that would make a good book, too, he thinks.

One thing author Donati never seems to be at a loss for is ideas. There are worse problems a writer can wrestle with. 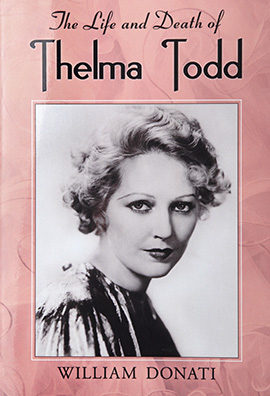 Donati, '06 Ph.D. English, so far has published four books. His latest, The Life and Death of Thelma Todd (McFarland, 2012), focuses on the beautiful blonde film star of the 1920s and '30s. Her death under mysterious circumstances at age 29 still has not been resolved to some people's satisfaction. (More about Donati's conclusions later.)

His earlier books were Lucky Luciano: The Rise and Fall of a Mob Boss, Ida Lupino: A Biography, and My Days with Errol Flynn: The Autobiography of Stuntman Buster Wiles, which he co-wrote with Wiles.

"When researching Todd, I started writing Luciano," he said. "I got deeper and deeper into these mysteries and couldn't get out."

The writing comes only after meticulous research. During a life that has included stints managing a law firm and a fine dining restaurant (not at the same time), he has earned four university degrees, three in English and one in Italian literature.

"If I learned anything, it was how to write a paper," he said of his student days. "When I am working on my books, I use the skills I learned in English classes about how to research and how to document."

It is that love of research - and its essential role in good writing - that he tries to pass on to his students at UNLV. As an adjunct professor, he teaches a world literature course and an argument-writing course as part of the undergraduate curriculum.

Using his own books as an example, he said, "You may not agree with them, but at least you can figure out where the information came from."

The Todd book came about after he snagged an interview with film noir star Lupino, who also was one of the first women to direct movies. The two were discussing Errol Flynn when she mentioned Todd, a close family friend. Lupino, who was just 17 when she met the comedic actress, had many stories to tell.

Just what was the true story of this Massachusetts beauty who won a contest, came to Hollywood, achieved movie stardom in such films as the Marx Brothers' Horse Feathers and Monkey Business, and then ended up dead of carbon monoxide poisoning a decade later, her body found in her luxurious Lincoln Phaeton parked in her boyfriend's garage?

The quest to find out took him to library and newspaper archives to learn all he could about both the life and death of "Hot Toddy," a nickname the actress detested. He combed through back issues of a dozen newspapers and even obtained Todd's FBI file. He interviewed as many people from "Old Hollywood" as he could find. Then he traveled to her home state to talk to family members and old friends. Fortunately, some of Todd's first cousins still were living.

"My book was a labor of love," Donati said. "I took my time. It gave me a chance to exhaust every source - the Academy (of Motion Picture Arts and Sciences) library, USC, UCLA. I went everyplace I could. I think I have written the definitive book (on Todd)."

For Donati, the cause of Todd's death is no longer a mystery. Was it a suicide? Was it murder - perhaps at the hands of the notorious Luciano?

No, Donati said. It was a simple accident.

She had gone to a party that night. Her married lover, horror film director Roland West, had told her not to drive all the way home if she stayed out late or had too much to drink. But she did come home late, Donati said, with only one of the two keys needed to get into the apartment. Not wanting to awaken West, whom she feared would be disappointed in her, she waited in the garage until morning, according to Donati's theory.

"I think she took a nap," he said, adding that he thinks she started the car with its 12-cylinder engine to stay warm.

She probably planned to wait until a porter with a key came to work and could let her in. Or maybe she was going to drive to her mother's house as West had suggested she do, he said. But Todd never got the chance. With the garage door closed, the carbon monoxide killed her. Her body was found on Dec. 16, 1935.

Donati recently completed a novel set in 1936 during the Spanish Civil War and is contemplating another nonfiction work about movie swashbuckler Flynn, this one concentrating on the actor's ties to a purported Nazi spy he met in New Guinea. Despite some writers' views to the contrary, Donati does not believe Flynn was a spy. Did Flynn know his buddy was a spy? Probably, Donati said, adding that Flynn liked to live on the edge.

Donati said he may not be a prolific writer, but that he believes his books have staying power.

"As a biographer, I call myself the long distance runner of writing," he remarks. "I only have four books in print, but they are going to be around. When people are interested in these subjects, they are going to go to my books. That means a lot to me."

Colin Tewey, a 2020 Classified Employee of the Year, keeps the stream of mail moving smoothly across campus. On weekends, it's trout-filled streams that call to him.
The (Remote) Interview: Adam Crisp

A cross-country move at the start of a pandemic proves perfectly timed for the new director of communications for Student Affairs.
Making a Plan to Give Back

Making a Plan to Give Back

Alumnus and former professor acknowledges role UNLV had in his career through planned gift.
More about People