Online giving campaigns, like the upcoming Rebels Give campaign, play up the competition to drive participation.

A student celebrates during last year's Rebels Give event. This year's giving drive will be held Nov. 7-8. (Photo by Casey Jade)

She was about to claim her “Rebels Give” T-shirt at a booth along the mall last year when a volunteer joked, “I challenge you to give a dollar to every college fund, and I’ll give you another T-shirt!”

The 19-year-old computer science major accepted the challenge — and upped the ante. “Just for fun, I decided to give $5 to each,” says Paoki, now a sophomore and a volunteer for this year’s Rebels Give campaign, Nov. 7 and 8.

Get Ready to Give 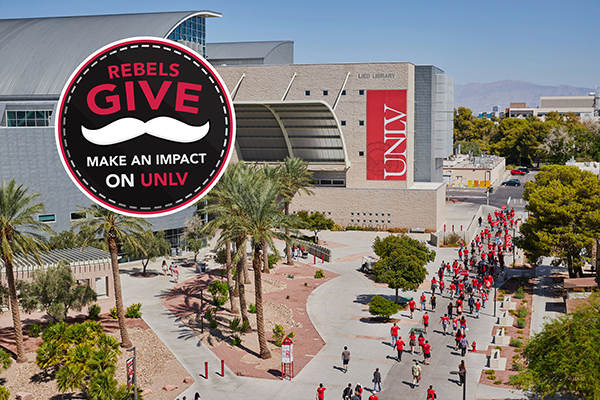 Get Ready to Give

Rebels Give, a 1,957-minute high-intensity fundraising blitz racked up some impressive achievements in its first year. Students, faculty, alumni and community friends raised more than $953,000 to support campus-wide programs and scholarships. More than 600 people were first-time donors, and the largest online gift — not including some big matching gifts — was $7,000. Some 342 people gave more than one gift, and a total of 1,769 people donated.

Participants shared their enthusiasm on social media, too. UNLV’s posts reached some 429,000 people and receiving 9,300 engagements. And #RebelsGive even trended on Twitter in the Las Vegas areas for five hours the first day.

But beyond the dollars, the campaign — with a midnight party, real-time leaderboards, a little pie-throwing, and a lot of friendly competition — was fun.

That’s by design, says professor Dan Sahl, associate director at the UNLV Center for Gaming Innovation and gamification expert. Gamification —adding elements of traditional game-playing to engage people in other settings — is used everywhere now, from fitness apps that set goals for your calorie burning, to shopping apps that give you bonuses for frequent purchases.

“Games help you engage in the world with an objective,” Sahl said. “It’s a way of giving people feedback about their place, and makes them feel connected and engaged.

“It’s a very human thing to want to be a part of something, and see where you fit,” Sahl said. “Plus, it’s for a good cause, and who doesn’t want to have fun for a good cause?”

“It’s an opportunity for the entire UNLV community to come together, to show their philanthropic support in a fun but impactful way,” Warren says. “And gifts of all sizes matter.”

Taking a Bite out of Health Care

Medical students get into the kitchen in the hopes that they’ll write fewer prescriptions for future patients.
More about Campus News