Family Inspires Professor to 'Go the Extra Mile' When Helping Others

Among her many titles — therapist, professor, director of UNLV's Couple and Family Therapy Program — Sara Jordan credits her mortician and EMT father for showing her a sense of humor is invaluable even in the most serious of careers.

Examine the CV of Sara (Smock) Jordan and you can’t help but be impressed by the accomplishments of the Kirk Kerkorian School of Medicine at UNLV professor who’s also a licensed marriage and family therapist and program director and graduate coordinator of UNLV’s Couple and Family Therapy Program.

The more you read about what she’s done nationally and internationally, the more the term "boundless energy" comes to mind. More than 40 peer-reviewed publications that range from The Journal of Marital and Family Therapy to The Australian and New Zealand Journal of Family Therapy have published her research, much of it on Solution-Focused Brief Therapy (SFBT), an approach to psychotherapy based on solution building rather than problem solving. While traditional forms of therapy analyze past life events, problems, and pathology, SFBT examines present resources and future hopes, a method typically involving three or five sessions that sees a client coached by a questioning therapist to find the client’s preferred future.

A co-author of the book Solution Focused Substance Abuse Treatment, Jordan, who completed her doctorate in marriage and family therapy at Virginia Tech, has been part of research teams whose work was awarded more than $2 million in government grants and contracts. Her endeavors have been nationally recognized by the Substance Abuse and Mental Health Services Administration’s National Registry of Evidence-based Programs and Practices.

An active marriage and family therapist who’s mentored over 50 students, she has written more than 20 book chapters, co-authored a training manual on SFBT, and presented her work at more than 150 conferences and workshops held in places stretching from Nevada, Texas, New York, and California to the Netherlands, Australia, Canada, and Aruba.

Yes, this married mother of three children, who joined UNLV in 2018 after 12 years at Texas Tech University, knows how to get things done.

As impressive as her 31-page CV is, what’s not in it has a way of capturing your attention. Jordan, a native of Evansville, Indiana, credits the work, inspiration, and compassion of her father, a 72-year-old mortician and emergency medical technician (EMT) who doesn’t talk of retiring, of going a long way toward making her the therapist and academic that she is today.

“As a young child, my dad took me to work often. As a little girl, I would wander around the casket display room and chat with his colleagues…It was like my second home in some ways. While we didn’t live in the building, we lived around the corner…I started working there as a receptionist after high school…I was interested in the compassionate way my father worked with families…he had a real gift for interacting with families…It was because of this that I got my bachelor’s degree in psychology. I realized that I wanted to help people who were under stress and conflict.”

That desire, she says, only became stronger as she worked during summer breaks with families at the funeral home, leading her to a master’s degree in family therapy at Purdue University and then on to her doctorate at Virginia Tech.

She learned firsthand as a teenager, she says, how death can move people to act irrationally.

“I remember one night shift at the funeral home a person came in and said their family member was approaching the building and they might have a gun. I was young, naive, and shocked. As I hid in the office and called the police, I learned that death and trauma and loss can bring up all kinds of emotions.”

Jordan, who serves as a graduate faculty fellow with the UNLV Graduate College, says watching her father at work made her realize that when you’re in a profession where you’re trying to help people through trying times, there are instances when you must go "the extra mile."

“If a family didn’t have money to pay a singer at a funeral, he would sing hymns. If a family didn’t have money for appropriate clothes for the deceased, he would find clothing that would work. If it took hours to present a body appropriately to ensure that a family without a great deal of resources could see a loved one off in a meaningful way, he came in on his day off. When you’re in a situation like a funeral, you have to do the best you can. I always remember that attitude of my father with the people I see in my work.”

It is also critical, Jordan says, that professionals who help others through difficulties keep a sense of humor, so laughter can be part of their lives. Without a zest for life, they not only lose the wherewithal to help provide others a path out of psychic pain, but they’re also in real danger of weighing themselves so far down with the problems of others that their own lives suffer.

“My dad has a way of telling stories tastefully that makes both him and others laugh. He knows what is appropriate for public consumption…When I was a figure skater as a teenager and he offered to do my makeup, but he said I had to lie down while he put my makeup on – that was the only way he knew how to apply makeup…How can you not laugh at that? Sometimes when he drove me and my friends in the ambulance that he used as an EMT to the circus, he reminded us that if he took the funeral home hearse, we would have to lie down. He liked to tell people how he and my mother (a nurse) met at the funeral home, and he was embalming a body when she called to tell him that they were pregnant. Someday I’d like to write a book of funny things he’s said. He’s always managed to stay happy."

Almost every day Jordan talks with her dad over the phone. It is, she says, how she remains balanced in her own life, despite often helping people in the most tragic of circumstances.

“I learned through my dad that emotions are hard, but life and death are part of the journey. I think having my dad as an example on how not to let your work negatively impact your life is how I manage. Humor, spending time with family, not taking myself too seriously, and embracing what comes your way is so important. My dad shares his day and I share mine when we talk. We usually laugh, and sometimes we cry. We support each other. I hope as a professor and supervisor I teach my students to reach out and ask for support when they need it and to take good care of themselves. None of us gets out of this alive so we might as well enjoy what life has to offer and make a lasting impact for future generations.” 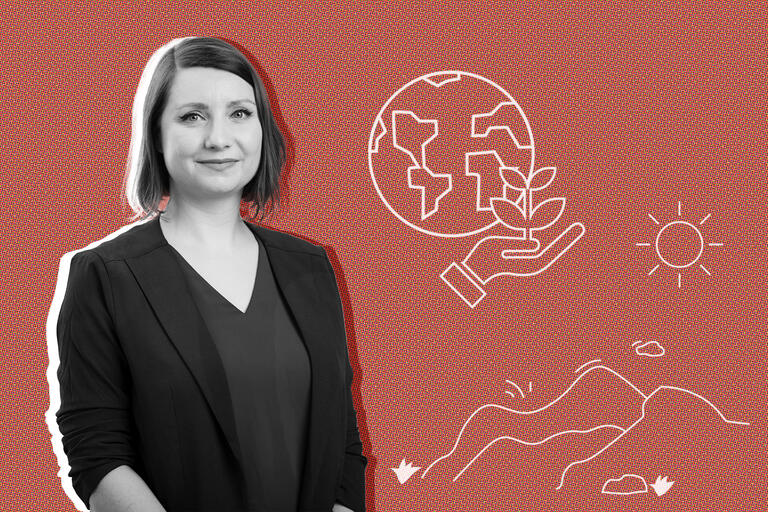 Beyond being passionate about researching climate change and its environmental impacts — Marie-Odile Fortier is unobjectively enthusiastic about educating others on the complex topic.