Nursing alumnus recognized the power of giving his patients detailed information. Now he's at the forefront in developing an artificial pancreas.

Say "online chat room" and, well, unsavory images can come to mind. For Tomas Walker, '12 Doctor of Nursing Practice, lingering in an online chat room set him on a path to becoming a major player in the development of an artificial pancreas.

Walker has focused his nursing career on helping patients with diabetes and endocrine issues since 1999. In 2006, while working as a nurse practitioner and clinical investigator at the Joslin Diabetes Center Affiliate in Las Vegas, Walker was exposed to a new medical device manufactured by Dexcom, Inc. The company had created a monitor that tracks a person's blood sugars every five minutes, surpassing the four-times-daily schedule of current methods. These devices were being quickly adapted into clinical trials to improve understanding of the impact of new diabetes medications.

As a full-time clinician and investigator in the practice, Walker became responsible for recruiting study participants, conducting intake exams, managing follow-up care, and coordinating data collection -- activities that have traditionally been under the purview of physicians.

At the time, Walker said, "there was great resistance to using the devices among care providers. Many did not understand the technology well, and they believed their patients would not be able to handle the additional information." 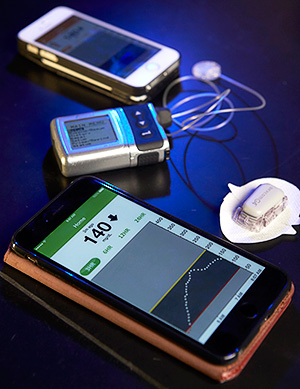 But Walker immediately recognized the potential that more data could bring. The monitor measured a person's glucose levels 288 times a day. The chart it produced created a pattern much like the heart rhythm lines you would see on a cardiac monitor. Working with his patients, Walker used the reports to identify which activities, such as eating or exercise, created the pattern's spikes and dips. But he was hoping to find that his patients also recognized those correlations, and would use the information to improve their own health.

One day in June, he found the beginnings of that proof in an online chat room.

Believing in the Patient

Walker was a silent observer in a diabetes chat room when he noticed participants uploading reports from their monitors and talking with each other about the best ways to improve their glucose control. The participants spoke candidly and seemed eager to help each other, offering advice about meals, portions, exercise, and other beneficial activities. One tracing stood out: the participant had noted on the report what she ate and when she administered her insulin doses -- the same information Walker requests from his patients during their visits. She then asked other patients for suggestions that would help her improve how she controlled her blood sugar levels.

Three months later in September, he prescribed one of the continuous glucose monitors to a young woman on his panel. During the next six days, she dramatically improved her blood glucose control with zero intervention from him or his staff.

"At that moment, I realized our patients knew what we, as clinicians, had not yet come to accept," Walker said. "Patients could and would use the monitors to self-manage their glucose levels. I knew right then these devices were going to change lives by reducing hypoglycemia, which remains the number one barrier to achieving diabetes control.

"After having this big 'ah-ha' moment, I became involved with the work that could make these devices available to more people with diabetes. I became a big supporter of the technology, advocating for patient use and doing more research trials."

A Bridge Between Research and the Real World

For the next nine years, he would become active in more than 30 clinical studies. He was the first clinician in the state to secure insurance coverage for personal use of the device by a person with diabetes. With the completion of each study and increased exposure, Walker grew more convinced that the continuous glucose monitors, and how patients use them to manage their sugar levels, were key to making an artificial pancreas.

Dexcom later offered a consultant's position to Walker, tapping his clinical background and front-line knowledge about patients to enhance the interface of its monitors. In 2014, the company hired him full-time as director of clinical projects.

"In my role with Dexcom, I'm identifying needs in the clinical setting that are being missed in the research setting, and developing ways to bring those two worlds together," Walker said. "We are striving to build the best glucose monitor we can to enable the development of an artificial pancreas that is so intuitive patients can begin using it with confidence almost immediately."

The artificial pancreas uses one or two insulin pumps. One will provide insulin to lower blood glucose, and the other, if used, will deliver glucagon to raise blood glucose. The artificial pancreas will communicate with a continuous glucose monitor--similar to the devices Walker tested in the clinical trials--using a control algorithm and an iPhone.

The artificial pancreas is being designed to take data from the glucose monitor and run it through the algorithm, analyzing the data and then administering the necessary insulin or glucagon dose. Since the monitor reads the glucose every five minutes, the artificial pancreas can make many small adjustments to maintain appropriate glucose levels throughout the day. Patients can see their glucose levels on an iPhone and have the ability to share that glucose data with someone remotely.

"The running joke used to be that an artificial pancreas was only 10 years away, and always would be. Not anymore. I think the device will be in patients' hands within the next three to five years."

Walker is also helping to develop the next generation of continuous glucose monitors, making them able to display glucose levels, meal and insulin dosing history, and other data, as well as giving parents the ability to monitor and track their children's levels when they are away from home.

According to Walker, his story is one of many that demonstrate how the nursing profession has changed during the past few years. Nurses, he said, are being seen more as advocates, implementers of change, scientists, care providers, and leaders.

"Five years ago, no one would have seen nurses doing what I'm doing at Dexcom, or what other nurses are doing in the research realm," Walker said. "The days of nurses working only in the hospital or clinical care setting have ended. Nurses are entering the healthcare field with more clinical experience and more opportunities to conduct research, lead practices, and change policy."

Kirk Kerkorian School of Medicine student Jacob Villarama took a year off to pray and contemplate which career path to follow.

Crittenden, a professor and graduate coordinator for UNLV's department of anthropology, will begin her new position on July 1.