Betting on the Pope

Researcher digs into the early treatises in UNLV's Special Collections to discover how the culture of gambling shaped Renaissance Rome.

John Hunt is among the 2014-15 class of Eadington Fellows at the UNLV Center for Gaming Research. The residency program enables researchers from around the world to dig into the unique archives in UNLV Libraries Special Collections. Hunt came to study the history of betting on papal elections. He will present the lecture, “Betting on the Triple Crown: Wagering on Papal Elections in Renaissance Rome,” at 3 p.m. April 15 at Lied Library, Goldfield Room.

At the UNLV Center for Gaming Research, I am diving into at several 16- and 17-century Italian treatises on gaming found in the UNLV Libraries Special Collections. My interest in political wagering in 16th-century Rome began with the intrigue that happens during the papal sede vacante, meaning "vacant see," the time between the death of a pope and the election of his successor. Many moralists were deeply concerned when the profane (gambling) became involved with the sacred (the papal election). 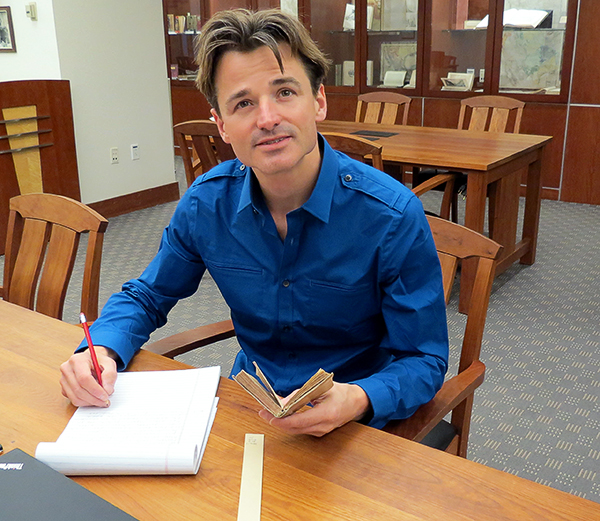 During sede vacante, papal government temporarily shuts down until the cardinals, locked up in the conclave, elect a new pope. All sorts of illicit activities took place during sede vacante -- court and neighborhood rivals sought revenge against each other, crowds tore down the statues of unpopular popes, and the people spoke openly about the papal election. Sede vacante was thus a topsy-turvy time for Rome -- a time in which the people played a greater role in the city's political life than in normal times.

While perusing documents related to the riots and vendettas that took place during sede vacante at the Vatican Library and the Venetian State Archives, I kept encountering references to scommesse a far il papa (wagering on the making of the pope) in newsletters that circulated among members of the papal court and the merchant community of Rome. The menati, or newsletter writers, through spies and courtly gossip, knew what transpired inside the conclave that supposedly locked and shut off from the rest of the city. They kept their readers informed of political machinations happening within the conclave, including the bickering between factions and the state of the daily voting among the cardinals.

The menati also kept their readers informed of the wagering that was taking place in the Banchi, the financial heart of Rome where the merchants, brokers and notaries involved in the placing of bets kept their offices. Through these newsletters, I was able to see how gambling related to the political world of Rome.

First, people of all social ranks placed bets on the election. Bankers, merchants, and noblemen placed high-stakes bets that could involve thousands of gold ducats. Even the cardinals themselves took part in the wagering as the Venetian ambassador to Rome, Matteo Dandolo, noted in a letter to the doge in 1549. And commoners -- tailors, blacksmiths, and other artisans -- placed bets of 10 ducats or more, a substantial portion of their yearly income.

Second, the wagering at the Banchi reveals that the populace at large was well-informed of events taking place in the conclave and that it could formulate strong opinions about the election. However, there was plenty of room for manipulation. The brokers at the Banchi often circulated false reports and rumors of cardinals' actions to sway the direction of wagering. In the process, they often manipulated public opinion and, in the exaggerated claims of churchmen, the election itself.

My research not only sheds light on the little-known phenomenon of wagering on the papal election, it also seeks to situate this practice in the political and social environment of Renaissance Rome. In particular, through the wagering at the Banchi, I hope to discover popular attitudes toward papal government and the election.

John Hunt, an assistant professor at Utah Valley University, specializes in the social and cultural history of Renaissance Italy, with a particular focus on popular culture in Papal Rome. His articles have covered the role of public opinion on the conclave and papal election; rumors and the pope's death; and carriages and violence. He currently is revising his manuscript, "Violence and the Vacant See in Early Modern Rome," for publication in late 2015.

Future projects will focus on the culture of gambling in Papal Rome. According to Hunt, Romans gambled on everything -- from papal elections and the promotion of cardinals to the outcome of tennis matches and card games. His project focuses on the "culture of gambling" in Renaissance Rome. Despite the fulminations of preachers and the bulls of stern popes, Romans of all ranks gleefully played cards, diced, and wagered on papal elections.

He received his Ph.D. from Ohio State University in 2009.