Like many a coach, Jerry Tarkanian had some quirks in his gameday routine. The UNLV Alumni Association captured a couple of them in a bronze statue.

The "Ghost Chair" next to Jerry Tarkanian. (Photo by Greg Cava)

Former UNLV basketball coach Jerry Tarkanian died Wednesday, Feb. 11, 2015. This story, originally published in the the Fall 2013 issue of UNLV Magazine. Read the obituary and share your memories of #Tark with us in the comments section.

It was called the "Ghost Chair." No one ever sat in the Ghost Chair. Until March 3, 1992. This was to be coach Jerry Tarkanian's last game as the Runnin' Rebels basketball coach.

The coach wasn't given to on-court histrionics during games. There was no Bob Knight-style chair throwing. And Tark's baggy, hounddog eyes certainly were incapable of duplicating the Mike Krzyzewski stare.

But he had his peccadilloes. And plenty of pent-up game time anxiety. And he didn't like anyone sitting next to him on the Rebels' bench. That empty seat became known as the Ghost Chair.

Tark's last UNLV squad was another good one. Led by Isaiah "J.R." Rider, the Rebels were 25-2 and ranked in The Associated Press Top 10 as they entered their season finale against Utah State.

The Rebels, Final Four participants in the previous two seasons, were on NCAA probation and barred from tournament play.

Brad Rothermel was the athletics director at UNLV from 1981-90. Prior to the game, Rothermel got a call from his friend. Tark wanted him at the Thomas & Mack.

"I told him, 'That's a wonderful offer, but where will I sit?'" recalled Rothermel. Today he is a special adviser to the athletic director. "Tark said, 'I want you to sit in The Ghost Chair.'"

Brian Hanlon knows his basketball legends. He is the official sculptor for the national Naismith Memorial Basketball Hall of Fame and a fan of the game. Tarkanian's was such an iconic figure that Hanlon wanted to do a sculpture whether the coach was accepted into the hall or not. "I got this idea after doing my homework on Jerry Tarkanian," Hanlon said. "You look at his numbers and wonder why he's not in the hall."

A chance meeting with a member of the Tarkanian clan (Hanlon doesn't remember the young man's name) led him to a phone call with Jodie Tarkanian, the coach's daughter. "Fast forward, I'm in Solana Beach (in Southern California, near Del Mar, a Tarkanian summer getaway) talking to Tark and his wife over breakfast about doing a sculpture," Hanlon said.

Time was a factor; as he put it delicately: He was worried about Tarkanian's health. So with no contract and no guarantees, Hanlon got to work on the sculpture almost immediately.

It's obvious Hanlon's work with UNLV is a labor of love. He spoke passionately about basketball, art, and family as he watched a recent sunset from his New Jersey porch. It was the sculpture that forged his bond with his wife. They were both track and field athletes in college. He made a bronze sculpture of her. "Once you bronze a girl," Hanlon said, "you have to marry her. That's in the rulebook."

Hanlon has worked with the Hall of Fame for 10 years and believes he's playing a part in righting a wrong "and giving a good man his due."

After he started the project, news came that Tarkanian had been elected to the Hall of Fame's 2013 class. The coach will be enshrined on Sept. 8 in Springfield, Mass.

The bronze statue will be accompanied by granite panels created by Chad Beene, '01 BA Communication Studies, a graphic artist who has been working closely with Hanlon for five years. Beene also did the original rendering.

Hanlon hopes to display his UNLV project in late summer. The statue will reside outside the Thomas & Mack Center -- essentially a building Tarkanian built -- and will feature a familiar pose: the coach, on the bench, sitting next to an empty chair, and chomping on a towel.

Of course: the towel.

On game days, Larry Chin was in charge of the famous towels. Chin has spent 39 years at UNLV, first as a student and then as the athletics department's equipment manager.

At UNLV, "we downplayed the importance of the towels, though, because people would steal them," Chin said. Aside from Tarkanian, Chin is the only person to witness all four Final Four teams as a member of the athletics staff. "During my 18 years with him, the towels went missing only one time."

Tarkanian's towel habit originated early in his career, during a tight high school game in Southern California. "They played in an older-style gym in the '60s," Chin explained. "The only water fountain wasn't near the gym." So Tark sucked on a soaked towel to keep hydrated. The team won and Tarkanian kept a stack of wet towels handy for every game after that.

"To coach, they were his safety blanket," Chin said. "He had a bad habit of biting his nails, so it was saving his fingernails, too."

By all accounts, Tarkanian was a superstitious basketball coach. He never wanted anyone to sit next to him during basketball games. And he took no opponents lightly. "Never underestimate the power of your adversary," he was fond of saying.

Utah State came into that March 1992 game with a mediocre 14-10 record, so the Aggies didn't pose a big threat to the Rebels in Las Vegas. But the game was close in the late going.

Rothermel was watching from the Ghost Chair. "There were three or four minutes to go, and we were up by only 6," Rothermel recalled. "Tark leaned over and asked me to leave."

The Rebels won the game, 65-53. And the Ghost Chair closed out a hall-of-fame run for UNLV's greatest coach.

Three years ago, Scott Gulbransen, '95 BA Communication Studies, moved with his family to Kansas City, where he is director of social media for H&R Block. Kansas City is also home to the College Basketball Hall of Fame.

Just as he had been ignored by the national Naismith Memorial Basketball Hall of Fame, Jerry Tarkanian's name was nowhere to be found in the college hall. So Gulbransen did what he does for a living: He got on Facebook.

Gulbransen said he didn't really have a strategy initially. At the beginning of the year, with the coach's health declining, Gulbransen decided to ramp up his efforts.

He reached out to fellow class of '95 communication studies graduates Sean DeFrank, associate editor at Vegas Seven; and Paul Gutierrez, a reporter at Comcast SportsNet in the San Francisco Bay area. Then the page got a boost when it was mentioned by broadcasters Greg Anthony, '91 BA Political Science, and Kenny Mayne, '82 BA Communication Studies.

Of course, Tarkanian's long-overdue honor finally came. He will be inducted into the national Hall of Fame Sept. 8. Back in Kansas City, Gulbransen, who is head of the UNLV alumni club, is celebrating. "Without Tark," Gulbransen, a San Diego native, said, "I never would have gone to UNLV." 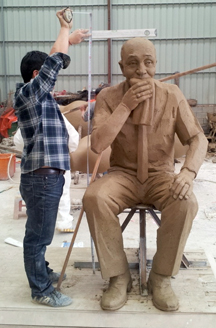 -- Pounds of clay used in the mold

-- Pounds of bronze forming the statue

-- Weight, in pounds, of the granite panels

More info: The Jerry Tarkanian Legacy Project was established by a committee of former Runnin' Rebel players, former and current university employees, and the UNLV Alumni Association. The fund will allow a statue of the coach to be built on campus and will establish a scholarship in his name. Visit The Jerry Tarkanian Legacy Project page for information.