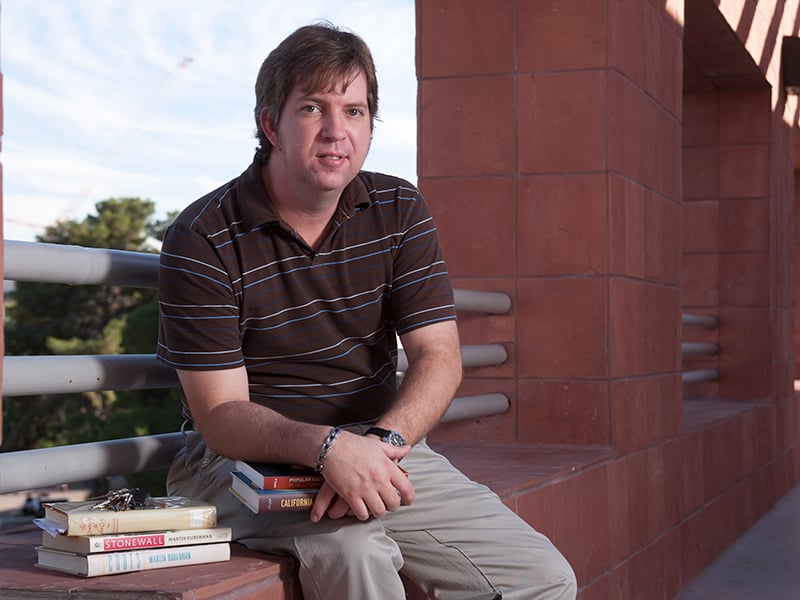 The Graduate Program in the History Department at UNLV offers both an M.A. and a Ph.D. degree. Masters students pursue advanced work in the history of the United States, Europe, or Asia as a major field. In addition, students may study the history of Latin America, Comparative World, or Public History as a minor field. Doctoral students study the history of the North American West, North American Culture and Society, or European Culture and Society, with the opportunity to study the same minor fields. Students are trained for careers in teaching, research, business, law, administration, professional writing, museum work, historic preservation, archival work, and government service. The history faculty, which includes nationally and internationally recognized scholars, work closely with graduate students, serving as intellectual and professional mentors. Students have the opportunity to gain experience in the field of Public History by working on museum exhibits, oral history projects, and National Park Service projects. The History Department also houses Preserve Nevada, a nonprofit organization dedicated to the preservation of Nevada’s cultural, historical, and archaeological heritage.

The Department has specialists in environmental history, urban history and the built environment, American Indian history, the Latina/o history, Chicana/o history, borderlands, ethnohistory, and the history of Mexico. The faculty provides both depth and breadth in its coverage of the field, encourages the study of diverse cultures, and interdisciplinary work. In addition, other members of the Department contribute expertise in gender, Asian-American, African-American, labor, religious, cultural and intellectual, and urban history and material culture studies. Las Vegas is at the center of the New West; the graduate program at UNLV capitalizes on themes related to its prominence. UNLV’s Lied Library has a collection of primary sources offering rich scholarly opportunities. It contains an enormous collection of microfilm including Native American records, Spanish-language newspapers, and documents of key agencies, such as the Bureau of Reclamation and the National Park Service. Special Collections in Lied Library houses a vast collection of materials on Las Vegas and Nevada history.

The Department has specialists in the intellectual and cultural history of United States history from the colonial period to the present. They bring expertise in urban history, race, gender, material culture, popular culture, political history and immigration. UNLV’s Lied Library has a collection of primary sources offering rich scholarly opportunities. Special Collections in Lied Library houses a vast collection of materials related to the study of race, ethnicity, gender, sexuality, popular culture and politics.

The Department has specialists in the intellectual and cultural history of classical antiquity, medieval Europe, the Ottoman Empire, eighteenth-century France, nineteenth-century Russia, twentieth-century Britain and the British Empire. They bring expertise in urban history, human rights, religion, sexuality, migration, and environmental issues. The Department has particular strengths in the history of Britain and the study of European and Eurasian empires. UNLV’s Lied Library is developing collections to facilitate research and writing in European social, political, cultural and intellectual history.

The History Department's Ph.D. program was formed in 1991. It embodies the ultimate expression of the Department's mission to generate and disseminate new knowledge through research, analysis, and publication. The three areas of concentration are: North American West; North American Culture and Society; and European Culture and Society. The program seeks to provide graduates with the capacity for original research and thought, and the qualifications for employment in secondary schools, community colleges and universities. Our first graduate received her degree in 1996.

The Ph.D. program is a more specialized course of study designed to train students to teach and write history at an advanced level. Seminars instruct students in the skills required for original scholarship. The doctoral program has three areas of concentration: North American West; North American Culture and Society; and European Culture and Society. The concentration in the history of Culture and Society emphasizes an interdisciplinary approach to European and North American history. The study of cultural forms, practices, and events offers the opportunity to explore issues in politics, economics and social life from a national and transnational perspective. The Department has specialists in nineteenth-century American cultural history, twentieth-century American cultural history, urban history, gender history, the history of race and ethnicity, as well as the intellectual and cultural history of classical antiquity, medieval Europe, eighteenth-century Britain, eighteenth-century France, nineteenth-century Russia, twentieth-century Britain, Near Eastern and Islamic history, and colonial Latin America.

The concentration in the North American West emphasizes a broad approach to the study of the region. The unique geography, social characteristics and demography of the North American West place it at the heart of many issues facing the United States today. The study of its economic, environmental, ethnic, racial and cultural past offers the opportunity to explore not only themes that pertain to Nevada and the Southwest, but also those that address the region and nation as a whole. The West's political and social systems, its rural, urban, and industrial sectors, its controversies over water, and its distribution of wealth make it an important focus of scholarly interest. With specialists in, environmental history, urban history and the built environment, American Indian history, Latina/o history, Chicana/o history, borderlands, ethnohistory, and history of Mexico. The faculty provides both depth and breadth in its coverage of the field, encourages the study of diverse cultures, and interdisciplinary work in the history of the North American West. UNLV contains numerous resources for the study of the region. A large microfilm collection with strength in western newspapers and in American Indian, women's, labor, ethnic and environmental history is available for students, as are extensive local and Nevada history collections.

In the first two years of the program, doctoral students take coursework, and demonstrate competency in one or more foreign languages. In the third year, students take comprehensive examinations, both written and oral, and write a dissertation prospectus, which they defend in front of their doctoral committee. The culmination of the degree is the dissertation: a major written contribution to the field of history based on original research, worthy of publication.

The doctoral program trains graduates to think analytically about the past, conduct original research, and to convey their knowledge through clear, professional prose. The doctoral program qualifies graduates for employment in four-year colleges and universities, community colleges, secondary schools, and in a variety of other institutional settings.

There are four types of courses: colloquia, readings course devoted to mastering the historical literature in particular fields; seminars, dedicated to original research work and writing; historiography, courses in the history of historical writing and historical theory and method; and independent study. Students are encouraged to develop a course plan that embraces the interdisciplinary strength of the faculty.

Students in the Traditional Master's Degree program are required to complete the forms below:

Students in the doctoral program are eligible to apply for Graduate Assistantships and opportunities for part-time teaching.

Students must meet the following minimum requirements to be considered for admission to the doctoral program:

Please note that meeting these minimum requirements does not guarantee admission into the program. Decisions on admission are based on a number of factors including: strength of undergraduate and graduate GPA, letters of recommendation, writing sample, and statement of purpose, and concordance of student areas of interest and areas of faculty expertise. Decisions on admission into the PhD program are made by the Graduate Committee.

Applications are accepted for fall only, and are due on February 1.

The application must be submitted via the Graduate College web page.

All application materials, with the exception of official transcripts, may also be submitted by this method.

Official transcripts for all credited coursework must be mailed to the graduate college,

Students in the Thesis Track are required to complete the forms below:

Students in the Non-Thesis Track are required to complete the forms below: