The Back Story: And the Honor Goes To

From Bob Hope to Jimmy Kimmel, top entertainers have long been honored at UNLV commencement with honorary degrees.

UNLV's spring 2017 Commencement will be held May 13. Join us in congratulating our newest alumni through social media with the hashtag #UNLVGrad. For full ceremony details, visit the commencement website.

Like many universities, UNLV awards honorary doctorates to public figures who have made extensive and notable contributions to their fields and to higher education. From politicians to philanthropists to sports figures and generals, UNLV's honorary doctorate awardees have come from a variety of backgrounds. With Las Vegas' rich entertainment history, it is not surprising that UNLV has presented honorary degrees to some notable showbiz luminaries.

Although UNLV has been awarding honorary doctorates since 1964, it wasn't until 1970, that the first celebrity, legendary comedian Bob Hope, was presented with his Doctor of Humane Letters degree. Hope, who headlined a charity benefit at the Sahara Hotel for the UNLV athletic program in April 1970, was a natural to receive the award for his work on behalf of the university.

Fast forward to 1976, our nation's bicentennial, and an extra special honoree was needed. It was none other than "Ol' Blue Eyes" himself, Frank Sinatra, who held court on the commencement podium on a blustery May afternoon at Sam Boyd Stadium. Noting that his education primarily had come from "the school of hard knocks," the man who had made his Las Vegas Strip debut at the Desert Inn back in 1950 and who had enthralled thousands of visitors with his Rat Pack buddies on the stage of the Copa Room in the Sands Hotel, was suitably touched by his award. "This is the first educational degree I have ever held in my hand. I will never forget what you have done for me today." Dr. Sinatra, as he was referred to in the Rebel Yell after the award, remained a strong supporter of UNLV following his award, giving a star-studded benefit for the UNLV athletics department in 1981.

Another legendary Las Vegas entertainer, Wayne Newton, received his honorary degree in 1980 and was honored at commencement again in 2001 with a Distinguished Nevadan Award. Appearing for the first time as a headliner in 1963, Newton soon broke all hotel attendance records at the Flamingo Hilton. By 1994, he hit 25,000 shows on the Strip, cementing his place as "Mr. Las Vegas."

Singer Diana Ross was presented with a doctor of humane letters in 1984 for her generosity in standing in for an ailing Sammy Davis Jr. at a UNLV fundraiser the previous year. Her appearance at the ceremony was notable for the a patch over her left eye, which according to Jet magazine, was due to the fact that she had accidentally splashed fingernail glue into her face. Ross was the last entertainer to stand on the UNLV commencement stage for nearly two decades.

In 2003, UNLV recognized alumnus Anthony Zuiker, '91 BA Communication Studies, better known around Hollywood as the creator and executive producer of the wildly successful CSI: Crime Scene Investigation television series and its spinoffs. It was a proud day for Zuiker, who said at the time, "The university means a great deal to me. I had great relationships with professors on campus who guided me through my years here. I have always had the same dreams: win an Oscar, win an Emmy, and receive a doctorate."

The following year, Siegfried and Roy, Magicians of the Century, were honored with the Distinguished Nevadan Award, which is presented at commencement to prominent residents who have made "significant achievements that have contributed to the cultural, scientific or social advancement of Nevada." Coming less than a year after Roy was severely injured by a tiger in the duo's long-running show, the award showed the deep feelings that the university community felt toward the entertainers. They had done much philanthropic work for the community during their long and distinguished career on the Las Vegas Strip.

At the 2012 fall commencement, celebrity chef and UNLV alum Guy Fieri, '90 BS Hotel Administration, received an honorary doctorate for his public service, for maintaining a strong connection with UNLV students, and for supporting fundraising efforts for the William F. Harrah College of Hotel Administration. Fieri has held strong to his Rebel roots throughout the years. UNLV faculty and students have been featured on his show Diners, Drive-ins, and Dives, and he regularly returns to campus to motivate and interact with students. Upon receiving the honorary degree, Fieri said, "To get the honorary doctorate is amazing. I've had some great things happen in my career, but this is at the top." 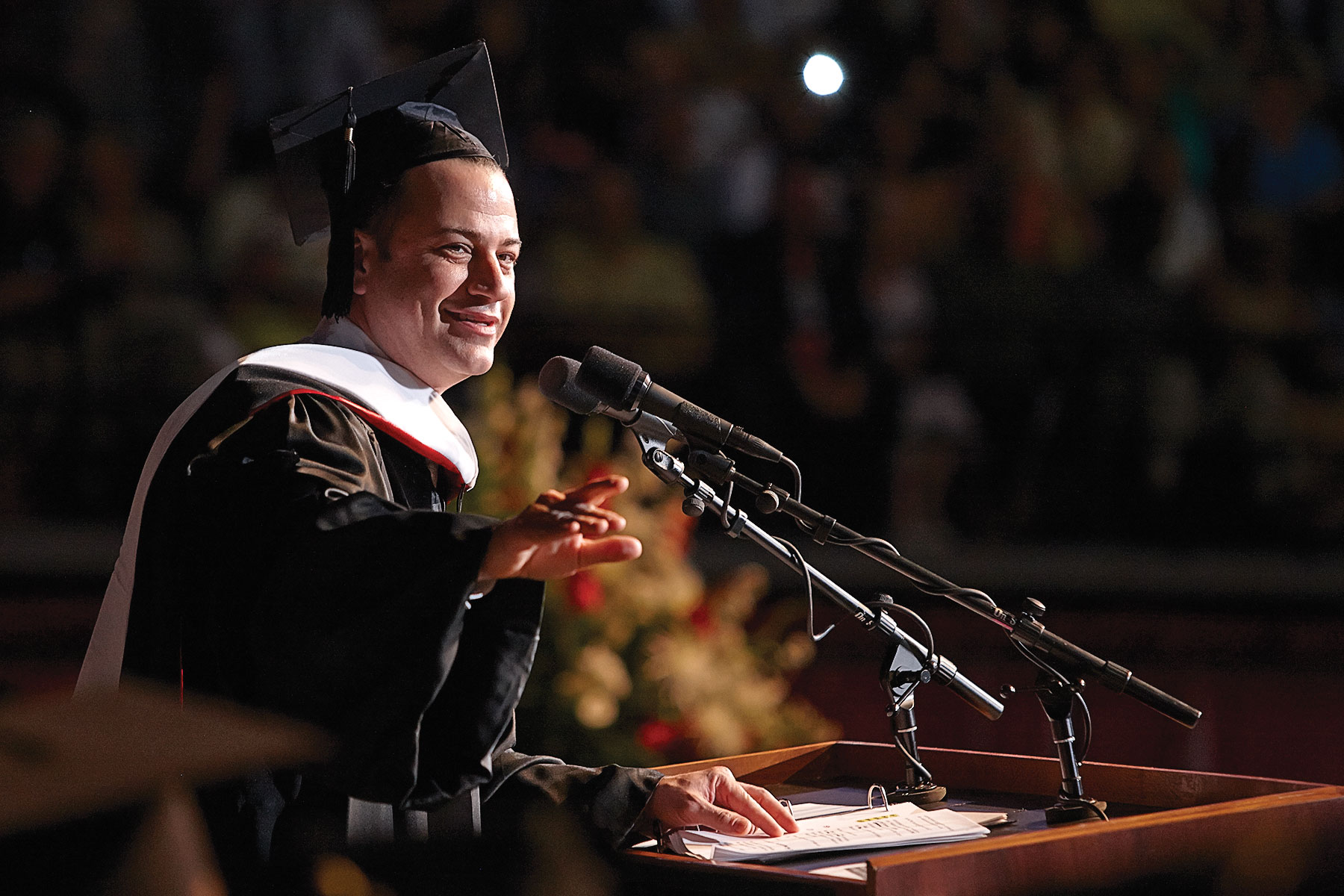 The most recent entertainment honoree was comedian, talk show host, and former Las Vegan Jimmy Kimmel, who received his honorary doctorate in 2013. A one-time UNLV student (1985-86), Kimmel joked that he had worked harder on his commencement speech than on all the homework he'd had at UNLV. No doubt it was one of the funniest commencement speeches ever given at UNLV but Kimmel's primary message to students -- finish what you started and do it well -- is timeless.