Paul Dzerk (shown on the left), arborist and UNLV Grounds supervisor, cared for UNLV's trees for over three decades before retiring in 2019. He passed away this past fall. (R. Marsh Starks/UNLV)

This is part of our occasional Namesakes series about the people who are memorialized around our campus.

On Dec. 15, 2022, as the campus quieted for the winter break, UNLV Grounds installed a living memorial along the Academic Mall, near the UNLV Amphitheater. A beautiful water oak was selected to honor Paul Dzerk, who worked in Facilities Management’s landscape, grounds, and arboretum department for over 35 years as an arborist and supervisor. In July 2019, he retired; this past fall, he passed away at the age of 84.

“Paul was responsible for training many of Grounds’ workers and planting many of the trees you see on campus,” wrote UNLV Grounds superintendent James Kearney in a post on the department’s Instagram account. “...His dedication to UNLV was unmatched by anyone.”

“He pushed planting oak trees,” said Jose “Rich”Jimenez, a Facilities Management supervisor who joined the tree crew in 1986 after transitioning from construction work. “We never had oak trees. If we took a tree out, he’d plant an oak tree. That’s why we planted the water oak.”

It was the U.S. Air Force that brought the New Jersey native to Nevada. He served for 21 years — from November 1956 to October 1977 — and was primarily responsible for aircraft maintenance. After retiring from the Air Force, he traveled overseas and worked in New Mexico for a time before returning to Las Vegas. He began doing landscaping for an apartment complex until eventually applying for a position on the UNLV Grounds’ tree crew in January 1984.

The tree crew is responsible for planting, removing, fertilizing, and maintaining the 4,000 or so trees diligently and thoughtfully planted across UNLV’s 335-acre campus. Dzerk often trained new recruits, teaching them how to properly (and safely) climb or prune the trees.

“He was kind of quiet, but he was very knowledgeable in what he did,” said Jimenez. “When you did get on his bad side, he would let you know.”

Dzerk had a quirky sense of humor, both Kearney and Jimenez said, and he would label his personal items — writing “front” and “back” on his helmet or “left” and “right” on his gloves.

“He was very passionate,” recalled Kearney, referring to Dzerk’s profound interest in trees and both a teacher and lifelong learner. “A year after Paul retired, we went to a training program, and he was there even though he was retired. He liked to go and talk about trees and learn.”

Said Jimenez, “Any little thing he could show somebody, he would. And I think that was his thing: teaching.”

Dzerk would often host training on campus for those interested in becoming an ISA Certified Arborist, according to Jimenez and Kearney. He also traveled across the country — though mostly California — to speak at seminars, with Huntington Beach being his favorite city to visit.

“A lot of the stuff in his cubicle was beach-themed,” said Jimenez.

During Dzerk’s time at UNLV, the campus received designations as an official arboretum as well as a Tree Campus USA from the Arbor Day Foundation; converted more than one million square feet of turf to water-smart landscaping; and nurtured his plantings until they became state champion trees, signifing that they are the largest specimen of his kind in Nevada.

A big fan of UNLV basketball and football, Dzerk would stay late at the office so that he could attend games. In fact, even outside of game days, he would work late into the evenings, according to Kearney and Jimenez. He would also decorate the Grounds’ warehouse during holidays, paying for the decorations out of his own pocket.

“He held us at a high standard,” said Jimenez. “Everything had to be done to a standard. Cuts had to be done right, clean ups. …Everything was disciplined because he was in the military. The tool shed, the trucks had to be put a certain way. But, yeah. He was a good mentor to us here.” 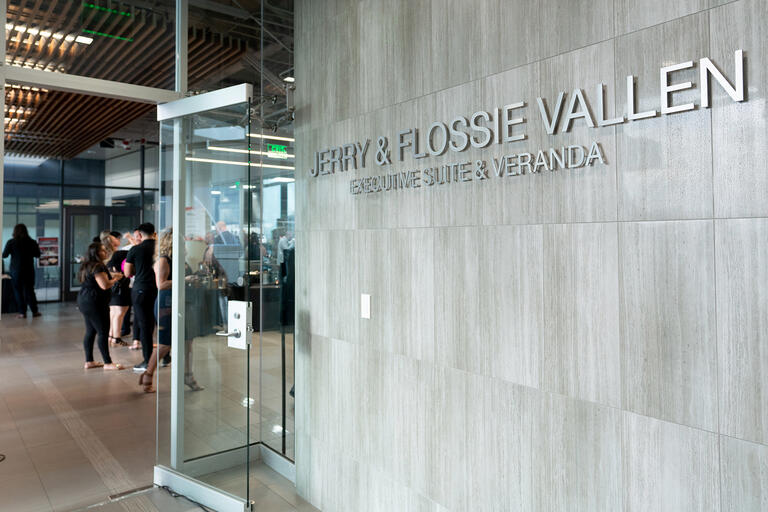