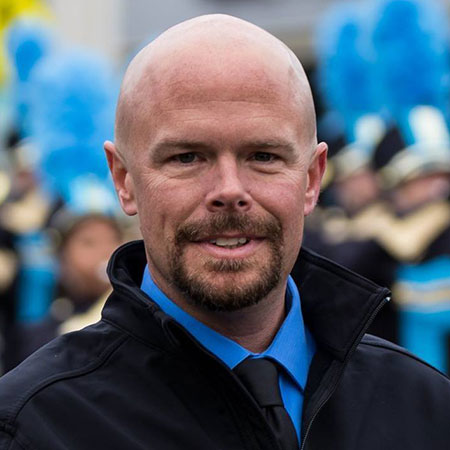 Travis Pardee is an adjunct faculty member of the Division of Music Education at UNLV. He instructs undergraduate and graduate sections of Teaching of Secondary Music Instrumental, Marching Band Techniques, and assists in practicum placements. In addition to his teaching assignments at UNLV, Pardee is the Director of Bands and Chair of the Performing Arts Department at Foothill High School in Henderson, Nevada, where he conducts the Wind Symphony, Jazz Ensembles, Marching Band and guides all aspects of the Foothill Band program.

Pardee’s concert and jazz ensembles regularly receive superior ratings at music festivals, and the Foothill Marching Band is the largest performing ensemble in Nevada with over 300 members. The Foothill Marching Band is a 13-time Bands of America regional championship finalist, and has been featured in the St. Patrick’s Day Parade in Dublin, Ireland (2008), the National Memorial Day Parade in Washington D.C (2012), the Macy’s Thanksgiving Day Parade in New York City (2014), and the Tournament of Roses Parade in Pasadena, California (2017).  The Foothill Wind Symphony has commissioned and premiered works by composers including Grammy Award-winning artist Eric Whitacre; and in 2014 premiered two new works for band by Anthony LaBounty that featured Marie Osmond in Carnegie Hall.