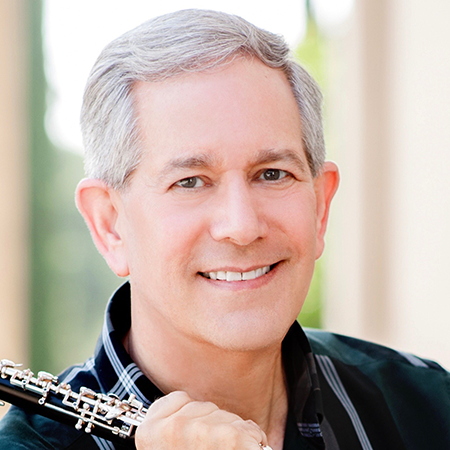 Stephen Caplan's performances have been heard at venues throughout the world, including the Kennedy Center and Carnegie Hall, and have been featured on several recordings. His solo recording of American music for the oboe, A Tree in Your Ear, has received international acclaim.

Principal oboist with the Las Vegas Philharmonic, Dr. Caplan also plays in orchestras accompanying popular superstars on the Las Vegas Strip. His eclectic performance background includes professional affiliations with a baroque period-instrument ensemble and a Sousa style concert band, as well as soundtracks for television and film. He has been a concerto soloist with numerous orchestras throughout the United States and in Europe. Caplan is the only performing artist to receive the Nevada Arts Council's prestigious Artist Fellowship Award three times, and was awarded the 2017 Fellowship Project Grant, resulting in a series of teaching and performance videos.

With the Sierra Winds, Caplan made six critically acclaimed recordings and was the recipient of numerous awards including the Nevada Governor's Award for Excellence in the Arts. Caplan is author of two books, Oboemotions: What Every Oboe Player Needs to Know about the Body, and The Breathing Book. He has developed innovative coursework for music students incorporating a better understanding of the body in performance, and has been a guest clinician for music programs internationally. He has a Bachelor of Music from Northwestern University and a Doctor of Musical Arts from the University of Michigan, and is a licensed Body Mapping Educator. Caplan is a Buffet Group USA Performing Artist.