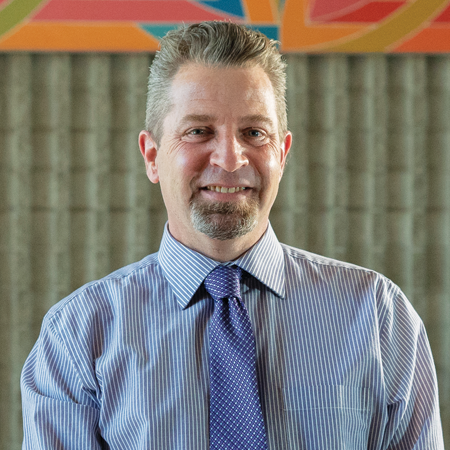 Shaun Franklin-Sewell has served as the UNLV Performing Arts Center’s Director of Marketing and Patron Services since 2007, having joined the staff in 2003 as the marketing director. Franklin-Sewell, then Shaun Sewell, received the bachelor of arts in theatre from the University of Memphis in 1995 and his master of arts in English literature 1997. He then began his doctoral studies at Louisiana State University, finishing his coursework in 2001 and ultimately receiving the doctorate of philosophy, specializing in theatre history, literature, and criticism, in 2005.

Franklin-Sewell has been a part-time instructor at UNLV and also worked for several associations, including the Association for Theatre in Higher Education, the American Society for Theatre Research, the Congress on Research in Dance, and the Nevada Preservation Foundation, providing communications and website consulting services. From 2001 to 2003, he was the head of the theatre management master of fine arts program at Wayne State University in Detroit, Michigan.

Locally, Franklin-Sewell is a member of the Nevada Gay Rodeo Association, a fundraising and western lifestyle organization. He met his husband, Ric, at a rodeo produced by NGRA in 2008. They were married in Cedar Rapids, Iowa in 2010. The Franklin-Sewells live in North Las Vegas and have five animals—a West Highland Terrier named Topper, a Yorkshire Terrier named Carter, and three cats: Stuart, Eliza, and Foxxy. An only child, Shaun Franklin-Sewell’s mother, Edith Sewell, is also part of the family.