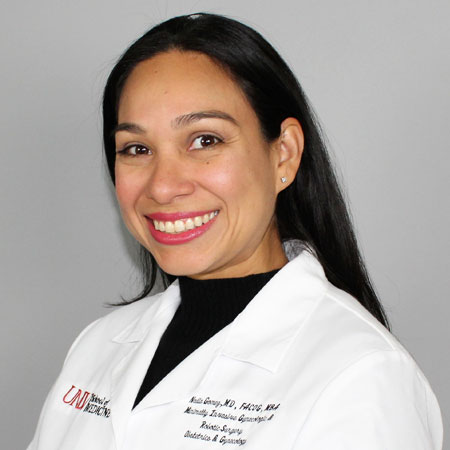 During her residency, Dr. Gomez served as Secretary-Treasurer of the American Congress of Obstetricians & Gynecologists (ACOG) District III Pennsylvania Region and became a member of the American Association of Gynecologic Laparoscopists (AAGL). Dr. Gomez has given several oral and poster presentations at national and international conferences. She was awarded the “Special Resident in Minimally Invasive Gynecology Award” at her residency graduation ceremony.

Dr. Gomez then completed advanced surgical training in Minimally Invasive Gynecology Surgery and Pelvic pain at Florida Hospital and Cleveland Clinic Florida. She now leads the Division of Gynecology at UNLV Medicine. Since her recruitment, she received a Faculty Mentoring Development Grant, the 2017 Top Doctor OB/GYN Award from University Medical Center (UMC), and an Outstanding Graduate Student Award from the Executive MBA program at University of Nevada Reno. She was recently inducted into the International Honor Society Beta Gamma Sigma from the College of Business.

Dr. Gomez has a passion for resident education and research. She is developing a new gynecology surgery curriculum and working on an IRB study involving robotic simulation training. Outside of work, she is a mentor to high school and undergraduate students pursuing a career in medicine and networking with international colleagues to bring innovation to underprivileged communities.