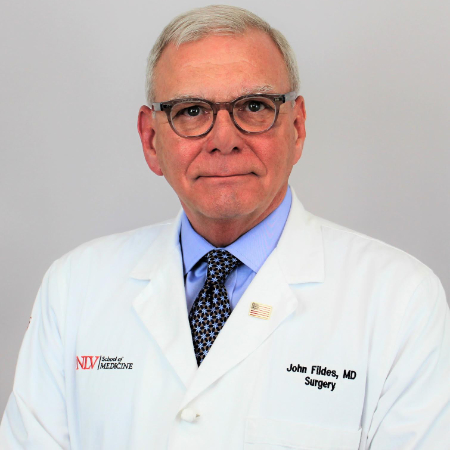 John Fildes, MD, FACS, FCCM, FPCS (Hon) is the Associate Dean for External Affairs at the UNLV School of Medicine. In addition, he is Professor and Inaugural Chair of the Department of Surgery. He served as Interim Dean from September 2019 through April 2020.

Dr. Fildes’ specialty is in Acute Care Surgery, the combination of Trauma, Surgical Critical Care, and Emergency General Surgery. He established the first American Association for the Surgery of Trauma (AAST) approved fellowship in Acute Care Surgery in the nation and was its Program Director for over a decade. Dr. Fildes is an internationally renowned trauma surgeon, researcher, educator and administrator in the fields of medicine and medical education. He has practiced in Nevada since 1996.

Dr. Fildes was the Medical Director of the Trauma Center and Chief of the Department of Trauma and Burns at the University Medical Center (UMC) in Las Vegas (1996-2019). UMC is Nevada’s only Level 1 Trauma Center, only Pediatric Trauma Center, and only Burn Center. Dr. Fildes was a leader in the medical response to the One October Shootings in Las Vegas. President Donald Trump commended Dr. Fildes and his surgical team for their care of the shooting victims. He continues to be a One October spokesperson at the regional, national, and international level. In addition, he is a consultant to DHS, FEMA, CDP, HHS, OS, ASPR, and EMMO -- agencies developing a disaster-training program for the medical response to a no notice, overwhelming, large-scale, mass shooting event.

Dr. Fildes is the recipient of many honors and awards. He received the Las Vegas Chamber of Commerce's Achievement Award (1998), was named as Nevada’s Distinguished Physician (2006), Healthcare Hero (2012), Best Doctors of Southern Nevada six times (2013-2018), and honored by the Mayor of Las Vegas who proclaimed May 12th as Dr. John Fildes Day in the City of Las Vegas (2017). He also received the Dean’s Distinguished Service Award (2007), Foundation Professor Award (2012), and was named an Outstanding Teacher and Full Time Professor on numerous occasions by medical students, residents, and fellows from several training programs. Dr. Fildes is the recipient of certificates of appreciation from the White House Medical Unit (1998, 2017), the Centers for Disease Control (2009, 2012), and the U.S. Air Force (USAF) (2016).

Dr. Fildes has been a Fellow of the American College of Surgeons (ACS) since 1990.  He made significant contributions to the creation of the National Trauma Data Bank® (NTDB®) and the Trauma Quality Improvement Project® (TQIP®). In the wake of the 9/11 terrorist attacks on the U.S., Dr. Fildes was asked to testify before the U.S. Senate on the readiness of the nation’s trauma centers. He was appointed National Chair of the ACS Committee on Trauma (COT) (2006-2010) and was promoted to Medical Director of Trauma Programs in the Division of Research and Optimal Patient Care at the ACS (2010-2014). He served as ACS Governor for the state of Nevada (2015-2018). Dr. Fildes received the Trauma Achievement Award (2018) for exceptionally meritorious service and lifetime achievement from the ACS and COT.

Dr. Fildes has collaborated with the USAF for more than two decades. He was a Senior Visiting Surgeon and Consultant at Landstuhl Regional Medical Center in Germany and at Bagram and Kandahar Air Bases in Afghanistan (2008). He embedded active-duty residents into general surgery and emergency medicine residencies at the UNLV School of Medicine. Dr. Fildes collaborated and led the efforts to establish the STARS-P (Sustainment of Trauma and Resuscitation Skills – Program) and more recently the SMART (Sustained Medical and Readiness Training) programs to sustain and improve the readiness of attending surgeons and medical personnel for battlefield medicine.

Dr. Fildes was a committee member for the Southern Nevada Health District from 1996 to 2020. He served on the Medical Advisory Board (MAB) (1996-2005). He served twice as the Chair of the Regional Trauma Advisory Board (RTAB) (2006-2008, 2017-2020). The RTAB is responsible for oversight of the Southern Nevada Trauma System (SNTS). He was selected to Chair the Needs Based Assessment Taskforce (NBAT), a community wide stakeholder group, to determine the need for new trauma centers in the SNTS (2016-2017).