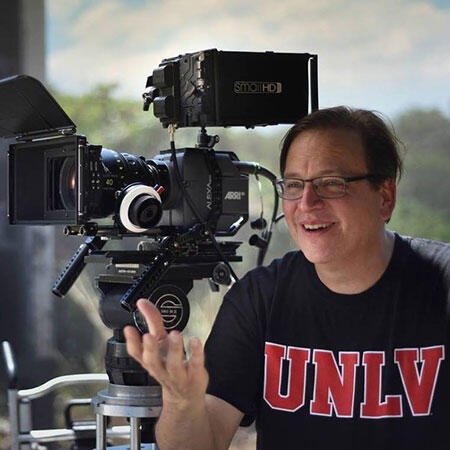 Professor Francisco Menendez is the winner of the CILECT Teaching Award for 2020, and has been in the vanguard of approaches to film teaching, mentorship, and pedagogy for three decades. The CILECT Teaching Award is a prestigious, highly competitive award for teaching excellence from a global association of major film and television schools. Professor Menendez also holds several prestigious teaching awards from the University of Nevada Las Vegas, and two Charles Vanda awards for excellence in the arts.

In 2017 he received a Regents’ Creative Activities Award Medal from the state of Nevada He has won first place for two juried screening awards from the University Film and Video Association, and as Film Department chair received over a million dollars in student initiative grants for the film program. Aside from filmmaking, his areas of research are virtual reality, interactive storytelling, and emerging technologies.

He began making movies at the age of nine in his native country of El Salvador. In the spring of 1984, he took a break from his undergraduate career to return to El Salvador during its civil war to work as a stringer for Time Magazine, and liaison to Jane Wallace for CBS News. In 1985, Menendez won a Dore Schary Award for his documentary Los Niños: Thinking About Others, about the challenging lives of Mexican children along the U.S. border.

Honored as Outstanding Graduate of the year at the University of Puget Sound in 1985, Menendez received his M.F.A. in Film and Video at California Institute of the Arts in 1989. He was a teaching assistant for three years to Oscar-nominated filmmaker Alexander Mackendrick, who served as his mentor. At Cal Arts he studied directing in theatre, video and cinema. He directed several theatre productions, and his first feature, Backstage, served as his thesis film for that program.

Menendez then worked as a casting assistant for Pagano/Bialy Casting, and ran their office on the 20th Century Fox lot. He also served as assistant editor to Kris Malkiewicz for the revised edition of the book Cinematography. Menendez joined the UNLV faculty in 1990 and served as the Film Department chair from 1999 to 2016. He is currently the artistic director of the Department of Film. He created the production and screenwriting sequences, designed the non-linear lab facilities, and began the Professional Film Crew Training Program, which trains film majors to cross over into careers in film production, and creates a trained workforce to serve the emerging needs of the Los Angeles film industry when it comes to Las Vegas to shoot films.

Menendez also supervised the implementation of an advanced course, Working in Film and Television. In this course, students learn best practices on how conduct themselves as above-the-line creators in the real world. The course also prepares UNLV juniors and seniors for the graduate school application process, thereby building a credible bridge to a terminal degree and work in the industry.

In 2001, Prof. Menendez was selected for the Showtime Latino Filmmaker Showcase with his film Medio Tiempo, which received a ten-year exclusive contract on that network. The film then screened at the Los Angeles Latino International Film Festival that same year. His next feature-length film, Primo, allowed him to explore the new world of High Definition workflows, and gave film department students the opportunity to work on all aspects of cutting edge pre-production, production and post-production. The film screened at CineVegas and LALIFF at the Mann’s Chinese in 2008.

After screening Primo, Academy Award honoree and legendary producer Roger Corman asked Menendez to direct Stealing Las Vegas, starring Eric Roberts, Antonio Fargas, and Michael Tylo. Menendez brought the project to UNLV to the benefit of the students, the program and the community. The film screened at the Egyptian Theatre in Hollywood in 2012 under LALIFF’s filmmaker showcase, and had its international premiere at Palais de Festivals at the Marché du Film at Cannes in 2013.

Stealing Las Vegas is currently in national and international distribution. For more information, visit the Stealing Las Vegas website. As chair, he worked together with his accomplished faculty, professional staff, and effective advising center to grow the program from one hundred students to over four hundred and fifty majors in the last decade.