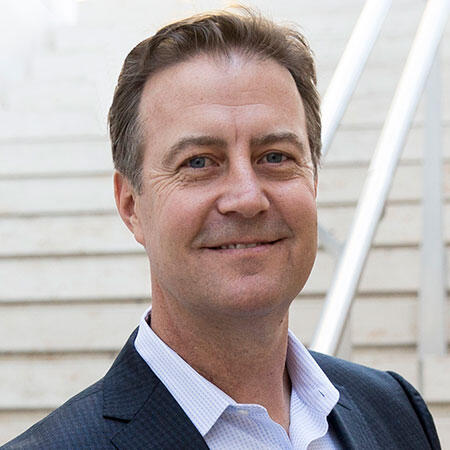 After earning his Ph.D. in 2002, Dr. Bernhard was named the inaugural Research Director at the UNLV International Gaming Institute (IGI), and he was awarded a dual professorship in hotel management and sociology. In 2013, he was named Executive Director at the IGI, where he developed and oversaw all academic and business functions. Under his leadership, the organization grew from two employees to 51, with four “centers of excellence” in areas of strategic need in the gaming-hospitality-tourism sector (innovation, policy/regulation, diversity in leadership, and problem/responsible gaming).

In 2021, he was named a university vice president in charge of UNLV's economic development functions, including the new Harry Reid Research and Technology Park campus, its Black Fire Innovation hub, and the UNLV Incubator (UNLV INC), powered by the Hughes Center and Blackstone.

Representing the university in these roles, Dr. Bernhard has delivered over 300 keynote addresses in government, business, and policy settings. His projects have been prominently featured in local and national media outlets (including The New York Times, The Discovery Channel, The Australian Broadcasting Channel, The History Channel, CNN, PBS, NPR, and all three major US networks). These efforts have earned him several awards: in 2007, his focus on globalization earned him the World Affairs Council’s International Educator of the Year award; in 2008, he was given the UNLV Hotel College’s top research award, the Boyd Award for Research; in 2009, he was given the Hotel College’s top teaching award; in 2010, he was named a Lincy Fellow at Brookings Mountain West; and in 2013 he was given the university-wide Barrick Scholar Award and the hotel college's Denken Career Award for research. After winning the university-wide Spanos Teaching Award, in 2017, he was also awarded the university’s top research distinction, the Harry Reid Silver State Research Award, making him the only individual in the history of UNLV to win these top research and teaching awards at UNLV. In 2022, the Las Vegas Global Economic Alliance (LVGEA), the region's economic development agency, gave him the "Leadership Award" for excellence in economic development. Since 2016, Dr. Bernhard has held the University of Nevada, Reno Philip G. Satre Chair, the most prestigious chair in the gaming field, giving him faculty status at both of the state’s major research universities. Most recently, ESPN and the New York Times both profiled Dr. Bernhard for his rare research-based academic impact in helping bring the Oakland Raiders to Las Vegas, in a manner that effectively countered long-harbored doubts about the city’s viability and integrity.

Dr. Bernhard is bilingual (English and Spanish), and spends his spare time playing sports and watching a diverse array of games with his daughters Audrey and Ava.