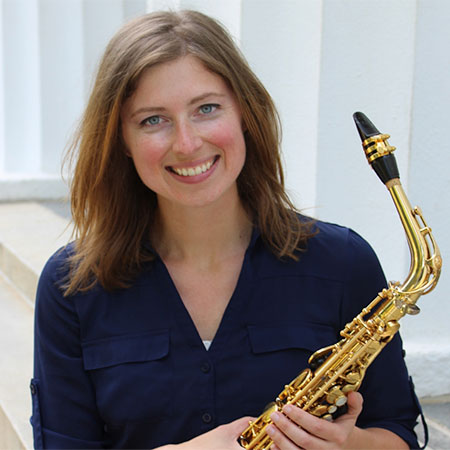 Shawna Pennock has been described as “rich and powerful, yet lightly effervescent” (Classical Voice of North Carolina). Dr. Pennock is the Adjunct Professor of Saxophone at University of Nevada, Las Vegas. At UNLV, she teaches applied saxophone, music theory, woodwind pedagogy, and coaches chamber music. She recently earned her Doctor of Musical Arts degree at the University of Georgia. She holds a Master of Music degree and a Professional Artist certificate from the University of North Carolina School of the Arts and a Bachelor’s of Music with an Education certificate from The University of Iowa. Her former teachers include Connie Frigo, Taimur Sullivan, Kenneth Tse, and Robin Ciccotelli.

Pennock is currently the tenor saxophonist for the Dasch Quartet. Formed in 2013, Dasch Quartet has rapidly developed a reputation as one of the most exciting emerging chamber ensembles in the United States. Dasch is as proficient in the music of living composers as it is of those of the past. Their debut CD "Necessary Edges" a collection of romantic string transcriptions by Dvorak, Puccini, and Smetana, was described as "immaculate" and "exquisitely done and played" (Clarinet and Saxophone Society of Great Britain).