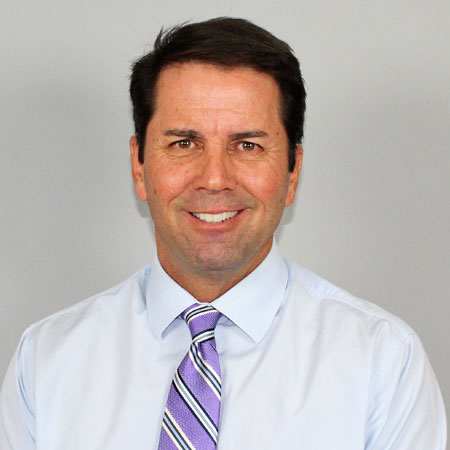 Paul Joncich spent the first 30 years of his career as an Emmy winning television news anchor and reporter. Now he’s using his experience and knowledge of newsrooms and the 24-hour news cycle to promote the Kirk Kerkorian School of Medicine at UNLV.

As manager of media relations, Paul’s responsibilities include providing information to members of the media and public about the people and programs that make the Kerkorian School of Medicine unique.

Paul feels the school, one of the newest medical schools in the country, is a “gold mine of compelling stories.” Smart, local students, many from difficult circumstances, pursuing their dream of becoming doctors so they can provide healthcare to their underserved community. Talented faculty physicians using the latest technology to perform procedures that are only available at a few places in the country. Researchers carrying out painstaking work that may someday provide answers to medicine’s biggest questions.

While helping grow the image and reputation of the school is one of his jobs, he is also responsible for keeping university leadership, supporters and stakeholders abreast of any notable developments. Less than two years after welcoming the first class, the School has grown to more than a thousand employees, roughly one-third the size of UNLV.

Paul grew up in Southern California and received his BA in Communications from Loyola Marymount University in Los Angeles.

He joined the Kerkorian School of Medicine in 2017 from KLAS-TV, the CBS affiliate in Las Vegas, where he spent five years anchoring the 4 pm and 6 pm newscasts. Prior to that, Paul anchored and reported in Cleveland, Ohio for WOIO-TV (CBS).

Paul was also the primary anchor for CBS-13 in Sacramento, where in addition to anchoring, his reporting took him to the former Soviet Union, where he spent a week covering the collapse of communism. In March of 2000, Paul was a witness inside San Quentin’s death chamber during the execution of serial killer and rapist Darrell Keith Rich.

As a reporter, Paul was known for throwing himself into assignments. During Operation Desert Storm, he went through the rigors of qualifying for Army Ranger training. For a story that aired during halftime of a Super Bowl, Paul played semi-pro football… and still bears the scar from a violent hit to the chin.

Paul has also anchored and reported at KNXV in Phoenix and KUSA in Denver, winning two Emmy awards and receiving more than 15 Emmy nominations and Associated Press awards.