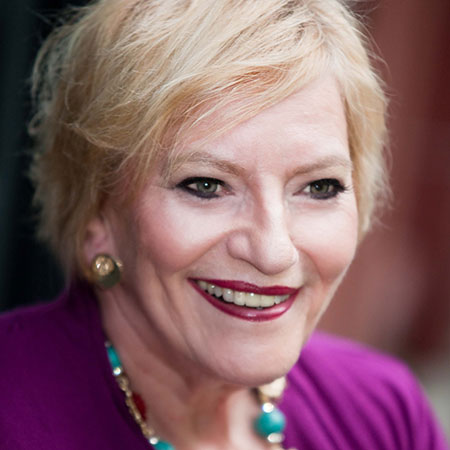 Kay Goss is an educator, author, historian, public servant, and emergency management official. Goss majored in political science, public administration, and government, with a minor in history, at the University of Arkansas (UA) in Fayetteville, graduating in 1963. She earned a master’s degree from UA in 1966.

From 1982 through 1993, Kay Goss served as senior assistant for intergovernmental relations for Governor Bill Clinton. In that role, she coordinated emergency management, emergency medical services, and fire service, assisting with related issues of public safety and law enforcement agencies, retirement policy, state election administration, city and county officials and employees, state employees and officials, other states, tribal communities, and international affairs. Clinton’s successor as governor, Jim Guy Tucker, asked Goss to stay on as an assistant in many of those same areas.

In 1993, after Clinton became U.S. president, Goss was nominated by him to replicate her work on a national and international scale by serving with Federal Emergency Management Agency (FEMA). She was confirmed unanimously by the U.S. Senate, becoming the first woman to serve as associate director of FEMA. She served in that position through the end of Clinton’s presidency in 2001. Her areas of responsibility included overseeing national preparedness and directing training and exercises, as well as planning for 1999’s possible “Y2K” worldwide computer breakdown. She also represented the U.S. at the North Atlantic Treaty Organization (NATO) Civil Emergency Planning Committee and assisted USAID in establishing partnerships with Russia’s EMERCOM and Turkey’s Istanbul University, along with exchange programs with forty-three countries. In addition, she founded the FEMA Higher Education Program, which led to an increase in related degree programs across the country.

She worked with fellow Arkansan James Lee Witt of Paris (Logan County), whom Clinton had appointed as FEMA director in 1993. In 1996, President Clinton elevated FEMA to a cabinet rank. During the tenure of Witt and Goss at FEMA, the agency was able to recover from a previously poor reputation (although its reputation took another hit after they left FEMA and Louisiana and Mississippi were hit by Hurricane Katrina in 2005). By 1996, an Atlanta Journal-Constitution editorial said that, by 1996, FEMA had developed “a sterling reputation for delivering disaster-relief services,” through preparedness, customer service, and willingness to listen to local and state officials. During Goss’s term at FEMA, there were over 500 disaster areas declared in all fifty states.

While at FEMA, Goss also directed the Emergency Management Institute in Emmitsburg, Maryland; the Mount Weather Emergency Assistance Center in Berryville, Virginia; and the North Atlantic Treaty Organization (NATO) Civil Emergency Planning Staff in Brussels, Belgium. After the 1994 Oklahoma City bombing, Goss and her staff launched the FEMA Higher Education Program and, later, co-chaired with Lacy Suiter the National Interagency Task Force on Counterterrorism, which would eventually be housed at the U.S. Department of Justice. After her work with FEMA in the Clinton administration, Goss worked with a number of public and private entities such as Electronic Data Systems, SRA International, and Booz Allen Hamilton. Thereafter, she formed her own company, World Disaster Management, LLC.

At the University of Arkansas, she has served as visiting lecturer in political science, interim director for international studies, and the university’s first executive in residence. She serves as chair of the J. William Fulbright College of Arts and Sciences Advisory Board and chair of the Fulbright College Campaign Arkansas Committee. In addition, she has served as adjunct faculty at the University of North Carolina, University of Nevada at Las Vegas (UNLV), the Istanbul Technical University, and the Metropolitan College of New York.