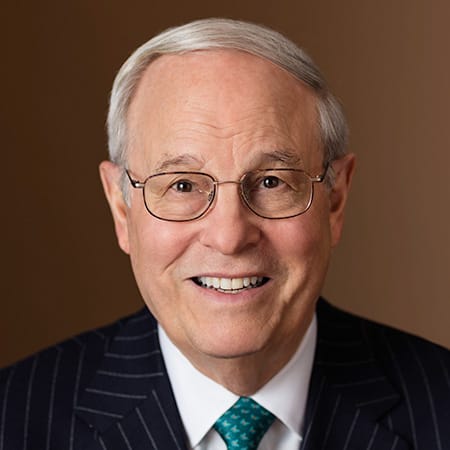 Frank J. Fahrenkopf, Jr., is President & CEO of the American Gaming Association (AGA). In his role as the chief executive of the AGA, Fahrenkopf is the national advocate for the commercial casino industry and is responsible for positioning the association to address regulatory, political and educational issues affecting the industry.

A lawyer by profession, Fahrenkopf gained national prominence during the 1980s when he served as Chairman of the Republican Party for six of President Ronald Reagan’s eight years in the White House (1983-1989). When Fahrenkopf retired in January 1989, he had served as Chairman of the Republican National Committee longer than any person in the 20th century (and the second-longest in the history of the party) and led the party through two successful presidential campaigns in 1984 and 1988.

He has been a frequent commentator on political and gaming issues on such network television programs as Crossfire, Inside Politics, Meet the Press, Hardball, Face the Nation, The Today Show, This Week and Good Morning America.

Fahrenkopf continues to serve in a variety of political capacities. He presently is Co-Chairman of the Commission on the Presidential Debates, which conducts the general election presidential and vice presidential debates in the presidential election years. He co-founded the commission in 1986 with Democratic National Committee Chairman, Paul Kirk. He also was a founder of the National Endowment for Democracy, where he served as a Vice Chairman and a board member from 1983 to 1993. Additionally, he served as a board member of the International Republican Institute (IRI), which he founded in 1984. He served for many years as Chairman of the Pacific Democrat conservative political parties from the United States, Great Britain, France, Germany, Canada, Japan, Australia and 20 other nations.

His early legal career included 17 years of practice as a trial and gaming lawyer in Nevada, his home state. He served as the first Chairman of the American Bar Association (ABA) Committee on Gaming Law and was the founding trustee and president of the International Association of Gaming Attorneys, a worldwide organization of government gaming regulators and private attorneys acting on behalf of licensed gaming enterprises.

He sits on the board of directors for five New York Stock Exchange public companies.