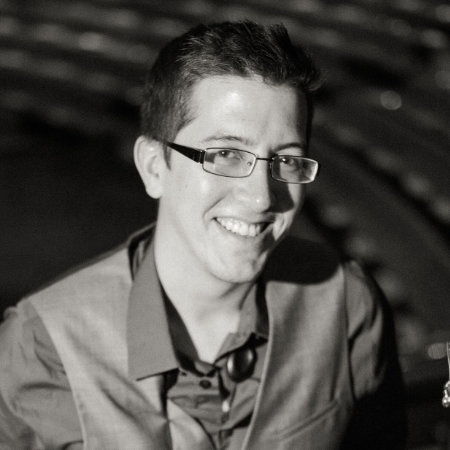 With over a decade of experience in teaching, writing and performing music in both academic and professional settings, Michael Spicer has immersed himself in a huge range of musical styles. Working as a cruise ship musician from 2010 to 2016, he honed his skills as a performer and bandleader, and has taught and written music for multiple academic levels, from instructing middle and high school students for CCSD to directing big bands and combos at UNLV.

He is the recipient of three Downbeat Student Music Awards in the Graduate College Division: two Outstanding Composition for Small Ensemble awards for his originals "Calico" (2017) and "Patchwork" (2018), and Outstanding Big Band Arrangement for "Love For Sale" (2018). These and more of his compositions can be found on the UNLV Division of Jazz and Commercial Music albums that Michael helped produce during his graduate studies: Rail Trails/Latin Journey III (2017) and Fascinating Rhythm/Latin Journey IV (2018).

Michael Spicer holds a Master of Music in Jazz Composition from the University of Nevada, Las Vegas, and a Bachelor of Arts in Music (Jazz) from St. Francis Xavier University in Antigonish, Nova Scotia, Canada. Since 2018, Michael has worked in Las Vegas as a freelance saxophonist, composer and teacher. He is an adjunct professor at UNLV, an educator for Clark County School District, and freelance saxophonist in Las Vegas, appearing regularly with the Lucky Devils Band and Vegas! The Show at Planet Hollywood on the strip.