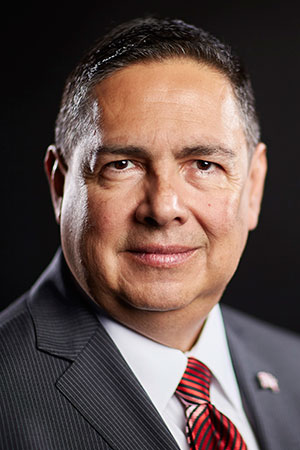 Joseph Miera was appointed Vice Provost for Educational Outreach as of September 1, 2017. Miera comes to UNLV from the University of New Mexico, where he served in a number of leadership positions over his 30-year career with the institution.

Since 2013, Miera was Executive Director of its Extended Learning – Operations & Contracts Group. Prior to that, he held a one-year appointment as Interim Dean and Interim Executive Director of UNM’s Division of Continuing Education. Miera also was UNM’s Associate Dean of Operations for nine years and Associate Dean of Business for two years. Additionally, he was the Director of Finance and Administration for KNME-TV, UNM’s public television affiliate from 1990 to 2001. Miera’s work at UNM earned him numerous national awards and recognition, including two Gold Awards in 2016 from UPCEA, the University Professional and Continuing Education Association.

Miera is completing an Ed.D. in Educational Leadership. He holds a master’s degree in public administration from UNM and a bachelor of science in accountancy from Arizona State University.