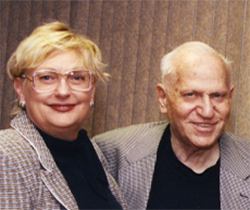 Joan and Dr. Joe Lapan Pediatric Endowment at the Kirk Kerkorian School of Medicine at UNLV

In memory of her late husband’s lifelong commitment to improving children’s health, Mrs. Joan Lapan has established the Joan and Dr. Joe Lapan Pediatric Endowment at the Kirk Kerkorian School of Medicine at UNLV. The endowment, the first at the Kerkorian School of Medicine, will help ensure excellence in educating future generations of pediatricians for Southern Nevada.

Joseph Lapan, MD, or “Dr. Joe” as he was affectionately called, dedicated his professional career and his retirement years to serving children as a pediatrician. His service spanned years in private practice, in the military, and in retirement leading a children’s specialty clinic.

Dr. Lapan grew up in Pueblo, Colorado and graduated from the University of Colorado School of Medicine in Denver at the age of 23. He was drafted by the U.S. Army and served as a captain and general physician in Nuremberg, Germany from 1947-1949. He then completed his pediatric residencies in Staten Island, New York and Omaha, Nebraska before opening a private pediatric practice in Hayward, California where he treated children for 25 years. He was well-known in the community for treating tuberculosis and for making house calls.

At age 54, he closed his private practice to join the U.S. Air Force for another tour in Germany. In 1979, he transferred to Nellis Air Force Base in Las Vegas where he was a lieutenant colonel and chief of pediatrics for four years before retiring. During his first six years of “retirement” he ran the Nevada Special Children’s Clinic, donating back his salary and much more.

“Dr. Joe” was a strong advocate for early childhood education and supported the Lynn Bennett Early Childhood Education Center at UNLV. He also helped create the outreach program “House Calls” at the Discovery Children’s Museum in 2009 and donated his doctor’s bag to use in its presentations. “House Calls” is still makings its rounds today and has been presented to more than 180,000 Clark County elementary students, on children’s programming for Vegas PBS, and at the UNLV/CSUN Preschool’s infant rooms. “Dr. Joe’s doctor’s bag” still accompanies the staff to all “House Calls” presentations. “Dr. Joe” passed away at the age of 91 in 2014.

Joan Buchanan Lapan has resided in Nevada since 1948, growing up in the Reno area and attending the University of Nevada, Reno. She has lived in Las Vegas since 1988. For 13 years, she served as the Administrator of the Real Estate Division of the State of Nevada, retiring in 2002.

In the 1990’s, Joan met and married Dr. Joe Lapan. For many years, they were involved with and supported programs focused on children’s health, including the creation of the Discovery Children’s Museum “House Calls” outreach program as noted above.

Joan has always been very involved in the community, including as a Brownie leader and as a long-time member of the Junior League. She currently supports and volunteers her time at the Mesquite Club; the Philanthropic Education Organization; Vegas PBS and its children’s programs; and as a docent with the Nevada State Museum.