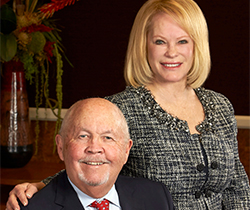 “We’re people who like to make things happen,” note Rick and Jeri Crawford, who are indeed making things happen in Las Vegas. They are making a big difference by investing their time, talent, and philanthropic support in medicine and the arts to build a more balanced community.

Rick and Jeri are supporting one of the 135 Kirk Kerkorian School of Medicine at UNLV Founding Scholarships. The Jeri S. and Richard T. Crawford Scholarship will provide a full four-year tuition scholarship to one of the 60 medical students entering the charter class of the Kerkorian School of Medicine in 2017. “We sponsored a scholarship because we are passionate about enriching our community by empowering students and supporting their education. The school will provide students with the tools needed to make a positive impact on lives and communities,” said Jeri.

Strong Family Legacy in Medicine
Jeri’s interest in medical education and medicine stems from a long-standing tradition in her family. “I come from a long line of physicians and medical missionaries. It’s part of my DNA,” says Jeri. Her family tradition started back in the early 1800’s when one of the early Scudder family patriarchs, Dr. John Scudder, Sr. (1793-1855) went to Ceylon in 1819 and founded the first Western Medical Mission in Asia along with several native schools and churches. He later became the first American medical missionary in India, beginning more than 1,100 combined years of missionary service by 42 members and four generations of the Scudder family in India.

One of Jeri’s great aunts, Dr. Ida Sophia Scudder, (1870-1960), and the granddaughter of Dr. John Scudder, Sr., was the first woman to graduate from the Cornell Medical College in 1899. She later became one of the most famous medical missionaries in India, founding the private, non-profit Christian Medical College & Hospital (CMC) in Vellore, India, in 1918. She led the CMC until 1946 and lived in a nearby village until her death in 1960. Today, CMC ranks as one of the top medical schools and tertiary care hospitals in India with more than 100 students in each matriculating class and more than 2,600 beds in its multiple in-patient settings. The CMC Foundation, whose governing board, the CMC Council, recently offered an ex-officio council seat to a member of the Scudder Association, funds the medical school and hospital. The Scudder Association’s mission has grown to include providing a bond of kinship, furnishing support to select hospitals and schools in India, supporting other charitable religious and educational activities, and research and publishing the Scudder family’s history and genealogy.

Committed to the Arts
Jeri has an equally strong interest in the arts and culture. When she moved to Las Vegas in 2004, she became involved in the city’s fledgling symphony, then five years old. Later, Jeri and Rick became early founders of The Smith Center and helped build a permanent facility for the orchestra. Jeri currently serves as the President and Chief Executive Officer of the Las Vegas Philharmonic and has served on its Board of Trustees since 2005. Under her leadership, the Philharmonic has focused on strengthening its impact through initiatives focused on youth programs and community engagement. The Youth Concert Series provides free concerts and music education to more than 16,000 Clark County School District students annually. The Philharmonic reaches the senior community through onsite musical performances, too. Jeri has led the Philharmonic in collaborations with other organizations, like the Boys and Girls Clubs and Clark County School District, to ensure the arts in Southern Nevada play an increasingly important role in the cultural development of Las Vegas.

Recognized nationally as a leader in the arts, Jeri was recently invited to join the prestigious John F. Kennedy Center for the Performing Arts’ National Symphony Orchestra National Trustees advisory board (NSONT) as a representative for the state of Nevada. She also serves on the UNLV Library Advisory Board and the Opportunity Village Foundation Board. A native of San Diego, she studied at the University of California, San Diego.

Giving Back to the Community in Multiple Ways
Rick is the President and Founder of Green Valley Grocery, Crawford Oil, Inc. and Crawford Coin, Inc. He opened the first Green Valley Grocery in 1978 in Henderson, Nevada. Green Valley Grocery has grown to 52 locations in Southern Nevada with about 385 employees. Rick has lived in Las Vegas since 1971. Rick was born in Winnipeg, Canada and raised in San Diego, California. He became a U.S. citizen in January, 1971, the same year he moved to Las Vegas.

Rick currently serves on the UNLV Foundation Advisory Board and on the Board of St. Rose Dominican Health Foundation. He has been active in several civic and charitable organizations including leadership roles with the Las Vegas Global Economic Alliance, the Shell National Wholesale Council as Chairman and the Nevada Retail Network Self-Funded Group. He is the Past Chairman of the Southern Nevada YMCA of Las Vegas.

“This community has been great to me,” said Rick. The Crawfords are deeply committed to sharing their time, talent, and resources to making Southern Nevada a healthy and culturally diverse community. They were honored as the Outstanding Philanthropists of the Year at the 2015 National Philanthropy Day luncheon of the Association of Fundraising Professionals Las Vegas Chapter for their stellar volunteer leadership.