We are proud to announce the completion of a new major sculpture work by UNLV Alum and UNLV Department of Art faculty member Tim Bavington.

Bavington's new sculpture commission is adjacent to the W Dallas in Victory Park, near Downtown, Uptown, Turtle Creek, the high-style Design District of Dallas. The work was a commissioned piece for this site and is titled "Matchbox" and stands 15 feet high by 34 feet feet wide. Made with steel pipe and automotive paint, “Matchbox” will be a visual translation of “Matchbox” - the song recorded by The Beatles in 1964.

“Tim Bavington arrived in Las Vegas from Shepard’s Bush in London (via Art Center in Pasadena) and he remains now what he was then, the ‘thinking-man’s Mod’-the progeny of Quadrophenia and Bridget Riley’s great paintings from the Sixties. When he arrived in Las Vegas, Bavington was painting hard-surfaced, west-coast monochromes, studying Bridget Riley’s work from the seventies, drawing comic books for The Simpson’s, and making perfect forgeries of Ed Ruscha paintings like Dixie Red Seville Vegas Plates because he couldn’t afford to buy one. Then one day, almost over night, all four of these fugitive endeavors came together in a series of small airbrushed paintings of fuzzy stripes in cartoon colors. They had it all and looked for all the world like neon in the mist.”  - Dave Hickey, Art Critic 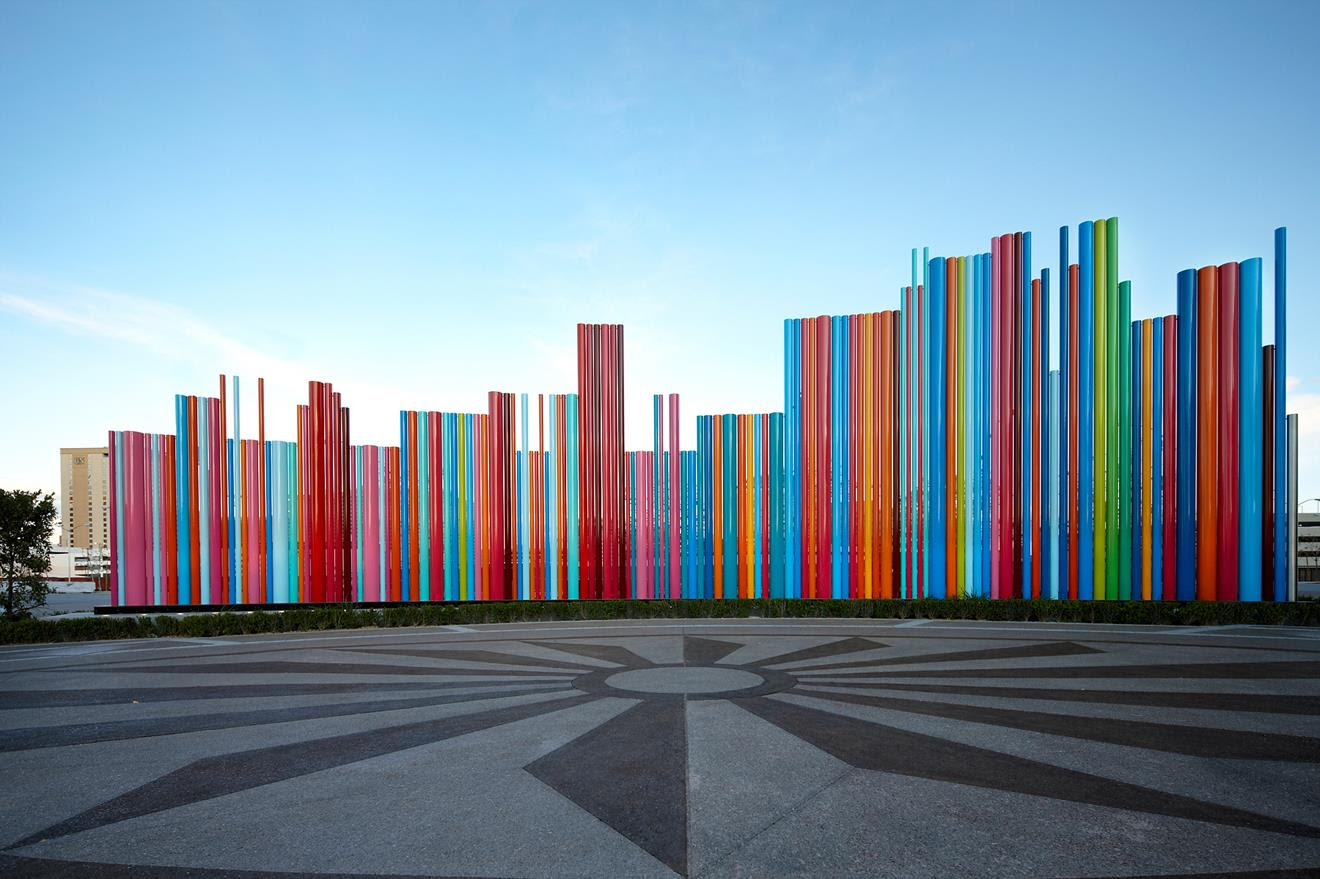 In 2013, Tim Bavington completed another work from this series in Las Vegas. That work was "Fanfare for The Common Man" at the Smith Center for the Performing Arts. Featured at the east end of the 2-acre Symphony Park, the piece serves as a frame to the outdoor stage. Using 128 pipes, the overall dimensions measure 27'- 5" x 86' - 8" x 17'- 1".

Integrating a site-specific artwork into the venue's property was of critical importance, considering that the arts were at the core of its purpose. The Smith Center wanted to highlight the rich local community of visual artists while also creating an iconic landmark for the space - which would act as a meeting point for guests of the Center. Since then, countless wedding photos, advertisements, commercial shoots, and group tours have taken place at the sculpture - and the Smith Center has become a marked destination for the arts in Las Vegas.

“Fanfare for the Common Man,” by American composer Aaron Copland, was selected by The Smith Center as the musical “muse” from which Bavington would pull his work. The composition was carefully selected by The Smith Center, as it resonated with its message to serve the community. Each pipe represents a single note in Copeland’s composition, and the colors are derived from a sign palette. The last unpainted pole represents a musical rest at the end of the composition. The Lights: The measure of time. Lights at every two feet represent a bar. 40 bars total. 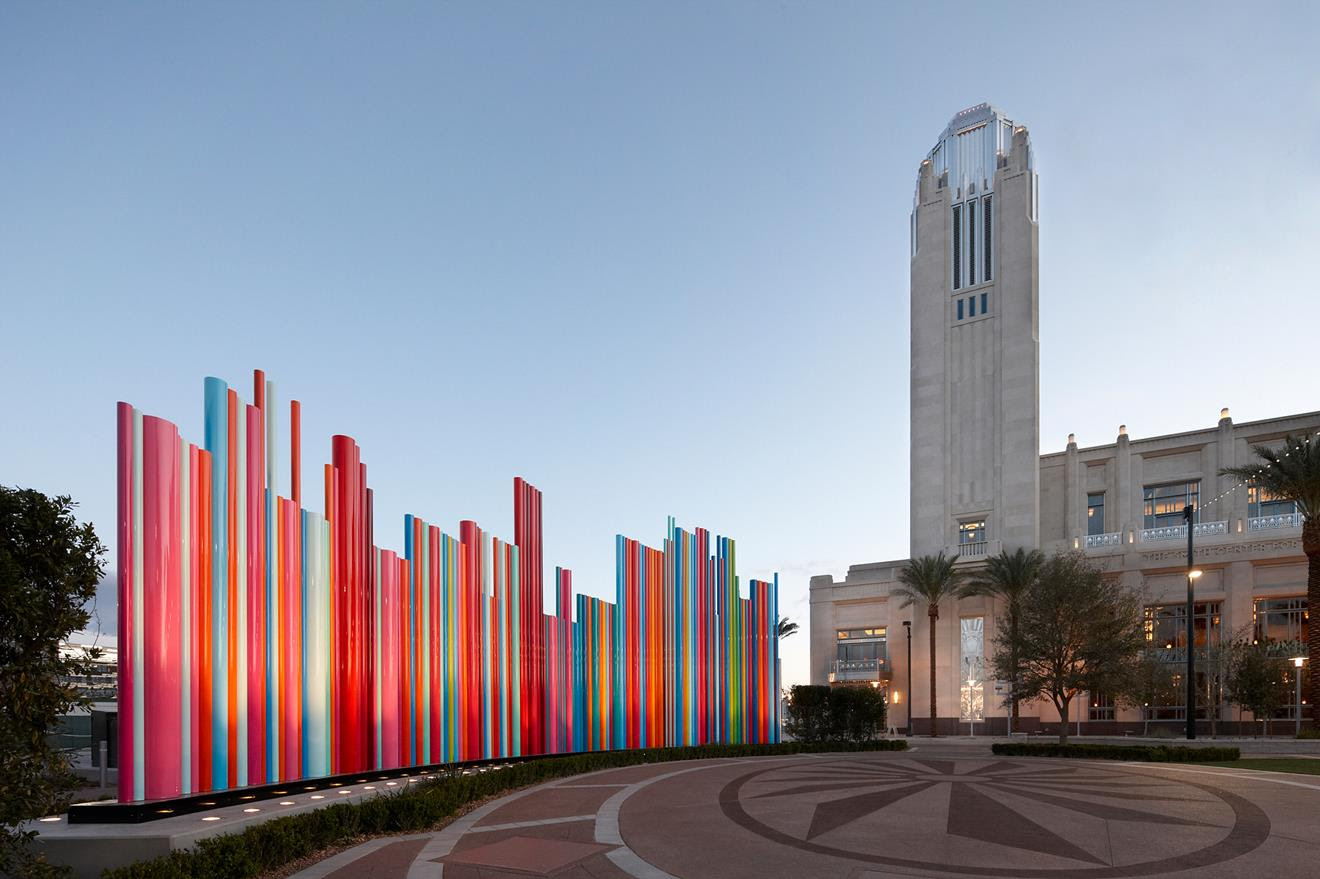 Please find below the link to the Documentary Film by Jimi Fallin that documents the process and the making of Tim Bavington’s PIPE DREAM: