We Need to Talk With Tyler Merritt 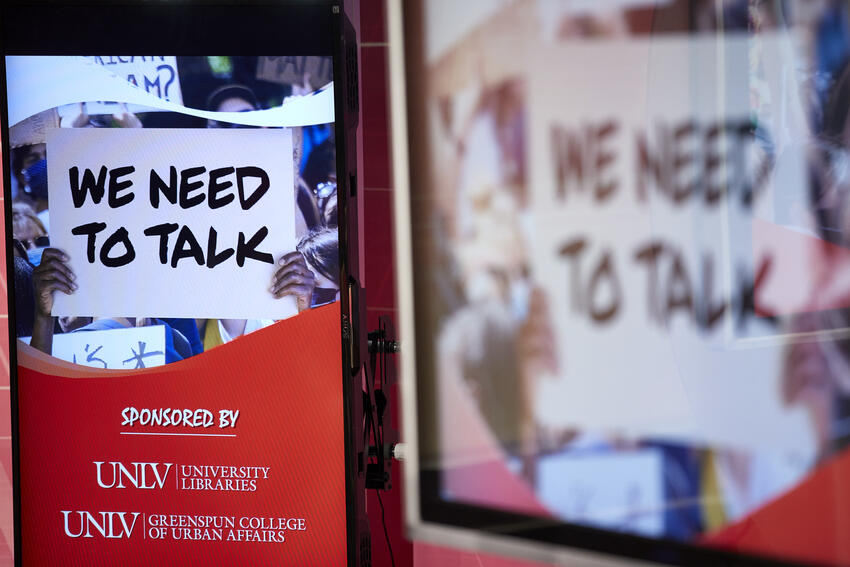 Tyler Merritt is the guest speaker for the next panel discussion in the series, “We Need To Talk: Conversations on Racism for a More Resilient Las Vegas.” The series was created by the UNLV Libraries and the Greenspun College of Urban Affairs. The event will be held in-person and livestreamed. The next discussion is titled “We Need to Talk With Tyler Merritt.”

Merritt is a Las Vegas native, an author, speaker, musician, actor, and creator of The Tyler Merritt Project. He is also the author of “I Take My Coffee Black: Reflections on Tupac, Musical Theater, Faith and Being Black in America” and the new children’s book, “A Door Made For Me.” Merritt was raised in Las Vegas and is a graduate from Las Vegas Academy. His video essay, “Before You Call the Cops,” was released in 2018 and has had more than 100 million views and was named the top 20 videos by NowThisPolitics. The same video went viral again in 2020 after the murder of George Floyd. TV host Jimmy Kimmel aired the video on his show May 20, 2020.

About We Need to Talk

In 2020, following the calls for racial justice that erupted across the country and around the world following the murder of George Floyd by Minneapolis police, UNLV University Libraries and the Greenspun College of Urban Affairs launched the series, “We Need to Talk: Conversations on Racism for a More Resilient Las Vegas.” The purpose of the series is to bring frank context to the demonstrations and begin exploring pathways for equity for all Las Vegas and Southern Nevada citizens.

This event is open to the public. The UNLV TV livestream of this event, along with archived episodes from Sept. 2020 to Sept. 2022 can be found on the UNLV Libraries' "We Need to Talk" website.

Sponsored by UNLV University Libraries and the Greenspun College of Urban Affairs. The series is funded in part by Libraries Advisory Board Member Sara Mason.