Pulling Back the Curtain: The Art of Show Business 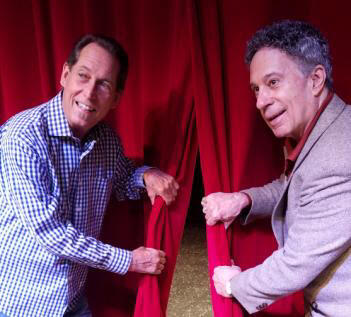 "Pulling Back the Curtain" - The Art of Show Business

with Jeff Kutash and Jon Fondy

Jeff and Jon will present a lively discussion about the show production process and the inner workings of the entertainment industry. Open to faculty, students, and the public with free admission and reception to follow. Visitors may park in staff, student, and metered spots after 7pm.

Jeff Kutash is a dancer, choreographer, and a 2000 inductee into the Rock and Roll Hall of Fame. He has worked with such greats as James Brown, John Travolta, Cher, Elvis Presley, and Frank Sinatra. Jeff created and produced "Splash", the first Las Vegas water-theme stage extravaganza, which was a long-running hit for 20 years and has earned multiple awards including a Golden Globe and an Emmy.

Jon Fondy has produced and starred in over 1,600 television shows, including the popular soap opera, "The Young and the Restless" for which he received Emmy recognition twice. Jon founded the Las Vegas TV Network, a full service film and TV production studio.

This event is free and open to the public. For more information please call Tammy Willis at 702-895-5730.