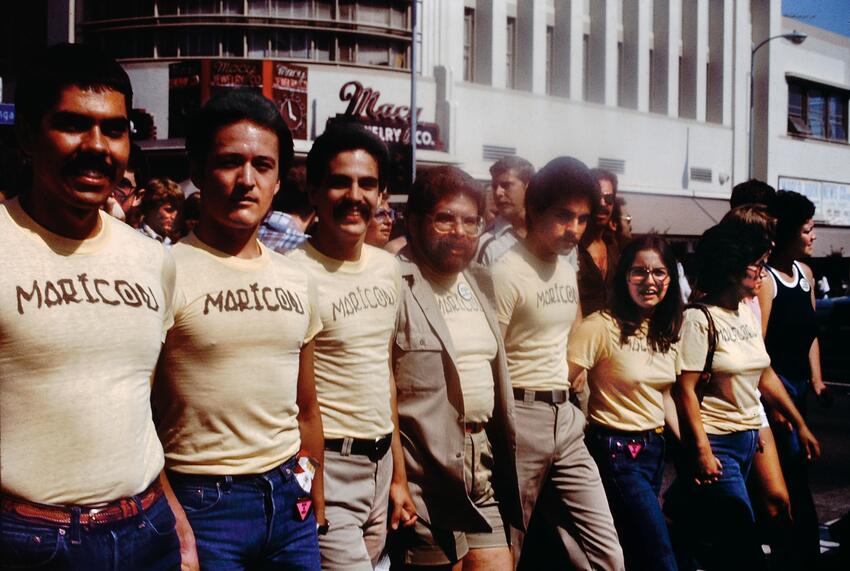 Join us for the opening reception of the Barrick Museum of Art's Spring 2019 exhibition:

Axis Mundo: Queer Networks in Chicano L.A. is a traveling exhibition that explores the intersections among a network of over fifty artists. This historical exhibition is the first of its kind to excavate histories of experimental art practice, collaboration, and exchange by a group of Los Angeles based queer Chicanx artists between the late 1960s and early 1990s. While the exhibition’s heart looks at the work of Chicanx artists in Los Angeles, it reveals extensive new research into the collaborative networks that connected these artists to one another and to artists from many different communities, cultural backgrounds, sexual orientations, and international urban centers, thus deepening and expanding narratives about the development of the Chicano Art Movement, performance art, and queer aesthetics and practices.

As referenced in its title, the exhibition also sheds light onto the work of Edmundo “Mundo” Meza (1955-1985), a central figure within his generation. Primarily a painter, but also known for his performances, design, and installation work, Meza collaborated with many of his peers towards developing new art practices amid emerging movements of political and social justice activism.

Axis Mundo presents over two decades of work — painting, performance ephemera, print material, video, music, fashion, and photography — in the context of significant artistic and cultural movements: mail art and artist correspondences; the rise of Chicanx, LGBTQ, and feminist print media; the formation of alternative spaces; fashion culture; punk music and performance; and artistic responses to the AIDS crisis. As a result of thorough curatorial research, Axis Mundo marks the first historical consideration and significant showing of many of these pioneering artists’ work.

Artists included in the exhibition:

Exhibition tour has been organized by Independent Curators International (ICI).

Axis Mundo: Queer Networks in Chicano L.A. is curated by C. Ondine Chavoya and David Evans Frantz as part
of Pacific Standard Time: LA/LA, an initiative of the Getty to encourage ambitious research and exhibitions at Southern California cultural institutions. The exhibition is organized by ONE National Gay & Lesbian Archives at the USC Libraries in collaboration with The Museum of Contemporary Art, Los Angeles, and organized as a traveling exhibition by Independent Curators International (ICI). Lead support for Axis Mundois provided through grants from the Getty Foundation.

This exhibition is supported in part by an award from the National Endowment for the Arts. Additional support has been provided by The Calamus Foundation of New York, Inc., the City of West Hollywood through WeHo Arts—the City’s Arts Division and Arts & Cultural Affairs Commission, Kathleen Garfield, the ONE Archives Foundation, the USC Libraries, and the Luis Balmaseda Fund for Gay & Lesbian Archives, administered by the California Community Foundation. Funding for the exhibition tour has been provided by the generous support from ICI’s International Forum and the ICI Board of Trustees.

The presentation at the UNLV Marjorie Barrick Museum of Art has been organized in collaboration with support from The Intersection, UNLV Department of Interdisciplinary, Gender, and Ethnic Studies, MGM Resorts Art & Culture, and an anonymous gift in honor of Hilda Roop. Additional partners include UNLV Spectrum, Latinos Who Lunch, and The Art People Podcast, UNLV Student Diversity & Social Justice, the UNLV Department of Art, UNLV Public History, the UNLV College of Fine Arts.

C. Ondine Chavoya is Professor of Art History and Latina/o Studies at Williams College in Williamstown, Massachusetts. He is the author of numerous texts on Chicano avant-garde art, video, and experimental cinema, and is a leading figure in the field of Latinx art history and visual culture. His curatorial projects have addressed issues of collaboration, experimentation, social justice, and archival practices in contemporary art. Chavoya has organized exhibitions and events including Asco: Elite of the Obscure, A Retrospective, 1972-1987, the first museum retrospective to present the wide-ranging work of the performance and conceptual art group Asco (2011-2013) with Rita Gonzalez, and Robert Rauschenberg: Autobiography (2016) and Michel Auder: Chronicles and Other Scenes (2004) with Lisa Dorin.

David Evans Frantz is Associate Curator of the Palm Springs Art Museum. From 2011 to 2018 he was the curator at ONE National Gay & Lesbian Archives at the USC Libraries. His curatorial projects examine alternative art movements, queer politics and culture, historical erasure, and archival practices in contemporary art. At ONE he founded a visual arts program that presented historical exhibitions and commissioned artists to respond to ONE’s collections. In 2011, Frantz co-curated with Mia Locks the exhibition Cruising the Archive: Queer Art and Culture in Los Angeles, 1945–1980 as a part of the first Pacific Standard Time: Art in L.A., 1945–1980. In 2014, he was the curator of the show-within-a-show, Tony Greene: Amid Voluptuous Calm, part of the Made in L.A. biennial at the Hammer Museum. Most recently he co-curated with C. Ondine Chavoya Axis Mundo: Queer Network in Chicano L.A., a collaboration between ONE Archives and The Museum of Contemporary Art, Los Angeles, for Pacific Standard Time: LA/LA.

Independent Curators International (ICI) produces exhibitions, events, publications, research and training opportunities for curators and diverse audiences around the world. Established in 1975 and headquartered in New York, ICI is a hub that connects emerging and established curators, artists, and art spaces, forging international networks and generating new forms of collaborations. ICI provides access to the people and practices that are key to current developments in the field, inspiring fresh ways of seeing and contextualizing contemporary art. http://curatorsintl.org/exhibitions/axis-mundo-queer-networks-in-chicano-la.