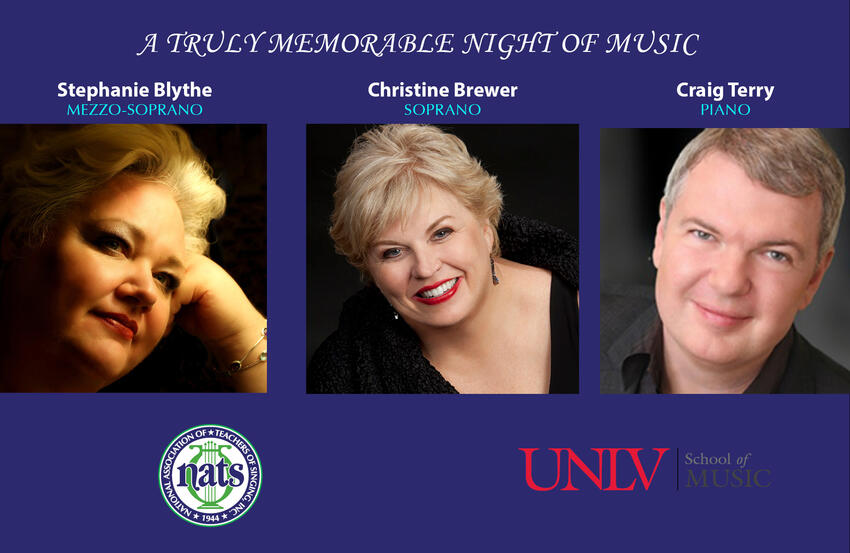 Opera superstars Stephanie Blythe and Christine Brewer, joined by renowned pianist Craig Terry, have planned a truly memorable evening of music for their featured concert during the National Association of Teachers of Singing (NATS) 55th National Conference. Highlights include solo and duet performances of favorite arias from the opera, oratorio, and light opera stage as well songs of love and friendship from the Great American Songbook.

Mezzo-Soprano Stephanie Blythe is a renowned opera singer and recitalist who has been seen with the Metropolitan Opera, the Paris Opera, Lyric Opera of Chicago, San Francisco Opera, and many other premier opera companies. Blythe has appeared in PBS’s Live from Lincoln Center broadcasts of the New York Philharmonic’s performance of Carousel and her acclaimed show, We’ll Meet Again: The Songs of Kate Smith. Her versatile performances had The New York Times raving “Stephanie Blythe, who can do anything, turned Carnegie’s 2,800-seat Stern Auditorium into her personal cabaret haunt.” Info: www.stephanieblythemezzo.com

Christine Brewer is named one of the top 20 sopranos of all time (BBC Music). Her range, golden tone, boundless power, and control make her a favorite of the stage and a highly sought-after recording artist — one who is “in her prime and sounding glorious” (Anthony Tommasini, New York Times). Her appearances in opera, concert, and recital are marked by her own unique timbre, at once warm and brilliant, combined with a vibrant personality and emotional honesty reminiscent of the great sopranos of the past.  She has performed with leading orchestras and opera companies worldwide, and with the greatest conductors of our time. Info: www.christinebrewer.com

Lauded for his “sensitive and stylish” (The New York Times) and “superb” (Opera News) playing, collaborative pianist Craig Terry enjoys an international career regularly performing with some of the world’s leading singers and instrumentalists. He currently serves as Music Director of The Patrick G. and Shirley W. Ryan Opera Center at Lyric Opera of Chicago, after having spent 11 seasons at Lyric as Assistant Conductor. Mr. Terry’s discography includes three recently released recordings: Diva on Detour with Patricia Racette, As Long As There Are Songs with Stephanie Blythe, and Chanson d’Avril with Nicole Cabell. He was also featured in a Live from Lincoln Centernational broadcast on PBS with Stephanie Blythe in 2013. Info: Craig Terry, piano

Students may receive one $15 ticket with ID.

National Association of Teachers of Singing