George Saunders & Others on "What My Teacher Taught Me" 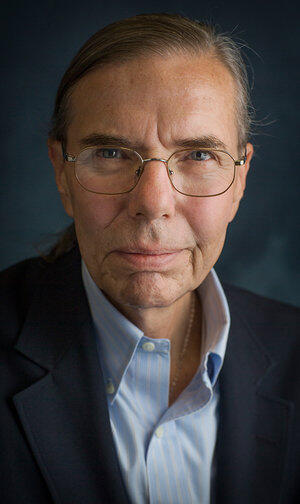 At this year’s Las Vegas Book Festival, the Black Mountain Institute presents a conversation about mentorship, celebrating the work and legacy of UNLV’s own Douglas Unger. In over three decades, Unger has been an advisor, teacher, and colleague to some of the brightest authors, journalist, and literary icons living and writing all over the globe – from Las Vegas to Lahore. In a rare moment, emerging and distinguished authors, featuring New York Times contributor Brittany Bronson, Muslim-Pakistani writer and Fulbright recipient Sorayya Khan, short story guru George Saunders, debut novelist Paula Saunders, novelist and professor Maile Chapman, O. Henry Prize recipient Vu Tran, and P.E.N. America prize honoree Ernie Wang, will share their personal anecdotes and moving tributes reflecting on what Unger has taught them. In turn, Unger will share the insights of a life spent learning from his students.

Brittany Bronson is a writer and hospitality worker based in Las Vegas, Nevada. She is a contributing opinion writer for The New York Times, where she writes about gender, class, and income inequality. Her nonfiction has also appeared in The Guardian, The Times of London, Bitch Magazine and her fiction has appeared in Paper Darts, F(r)iction, BULL, Juked, and others. She has received awards and recognitions from TalkPoverty.Org, the Nevada Arts Council, Vegas Seven Magazine, and The Pinch Literary Awards. She earned her MFA in Creative Writing from the University of Nevada, Las Vegas in 2014.

Maile Chapman is the author of the novel, Your Presence Is Requested at Suvanto, short-listed for the Guardian First Book Award and a finalist for the PEN Center USA literary award in fiction. Her stories have appeared in A Public Space, Best American Fantasy Writing, Dublin Review, Boston Review, and GRANTA Online, among others. She received her MFA in fiction from Syracuse University and her Ph.D. in English from the University of Nevada, Las Vegas, and has been a fellow at the New York Public Library’s Dorothy and Lewis B. Cullman Center for Scholars and Writers, as well as a Fulbright Grantee to Finland, where she visited early twentieth-century institutional buildings designed by Finnish architects. She was also the Las Vegas facilitator for Literature and Medicine, a humanities discussion group for hospital staff, organized by the Nevada Humanities Council and supported by the Maine Humanities Council.

Sorayya Khan is the author of Noor, Five Queen’s Road, and most recently City of Spies which received the Best International Fiction Book Award at the Sharjah International Book Fair. She was awarded a US Fulbright Research Grant to conduct research in Pakistan and Bangladesh, and received a Malahat Review Novella Prize for work that grew into City of Spies.  She received an artist grant from a local foundation which made possible traveling to Banda Aceh, Indonesia, where she interviewed survivors of the 2004 tsunami. Her work has appeared in various publications including Guernica, Longreads, The Kenyon Review, North American Review, and Journal of Narrative Politics. She is the daughter of a Pakistani father and a Dutch mother, was born in Europe, grew up in Pakistan, and lives in New York with her family.  She is currently spending fall semester teaching at LUMS university in Lahore.

George Saunders is the author of eight books, including the story collections Pastoralia andTenth of December, which was a finalist for the National Book Award. He has received fellowships from the Lannan Foundation, the American Academy of Arts and Letters, and the Guggenheim Foundation. In 2006 he was awarded a MacArthur Fellowship. In 2013 he was awarded the PEN/Malamud Award for Excellence in Short Fiction and was included in Time’s list of the one hundred most influential people in the world. He teaches in the creative writing program at Syracuse University.

Paula Saunders grew up in Rapid City, South Dakota. She is a graduate of the Syracuse University creative writing program, and was awarded a postgraduate Albert Schweitzer Fellowship at the State University of New York at Albany, under then-Schweitzer chair Toni Morrison. She lives in California with her husband. They have two grown daughters.

Vu Tran's first novel, Dragonfish, was a NY Times Notable Book and a San Francisco Chronicle Best Books of the Year.  His short fiction has appeared in the O. Henry Prize Stories, the Best American Mystery Stories, Best of Fence, and other publications.  He is the winner of a Whiting Writers’ Award and an NEA Fellowship, and has also been a fellow at Bread Loaf, the Sewanee Writers’ Conference, and the MacDowell Colony. Born in Vietnam and raised in Oklahoma, Vu received his MFA from the Iowa Writers’ Workshop and his PhD from the Black Mountain Institute at the University of Nevada, Las Vegas. He is a criticism columnist for the Virginia Quarterly Review, and is currently an Assistant Professor of Practice in English & Creative Writing at the University of Chicago.

Douglas Unger has become well-known as a teacher of creative writing and as a person of letters who contributes to literary activism and the global literary community. He is the author of four novels, including Leaving the Land, a finalist for the Pulitzer. His most recent book is Looking for War and Other Stories. He has also published numerous short fictions and essays and occasionally writes professionally on screenplays. He serves on the executive board of Words Without Borders and the Americas for Conservation and the Arts.  Professor Unger is the co-founder of the Creative Writing International program housed in the Department of English and affiliated with the Black Mountain Institute.

Earnie Wang resides in Las Vegas. He holds an MFA from the University of Nevada, Las Vegas, and his work appears in McSweeney's Quarterly, The Threepenny Review, Passages North, and the 2018 PEN America Best Debut Short Stories.