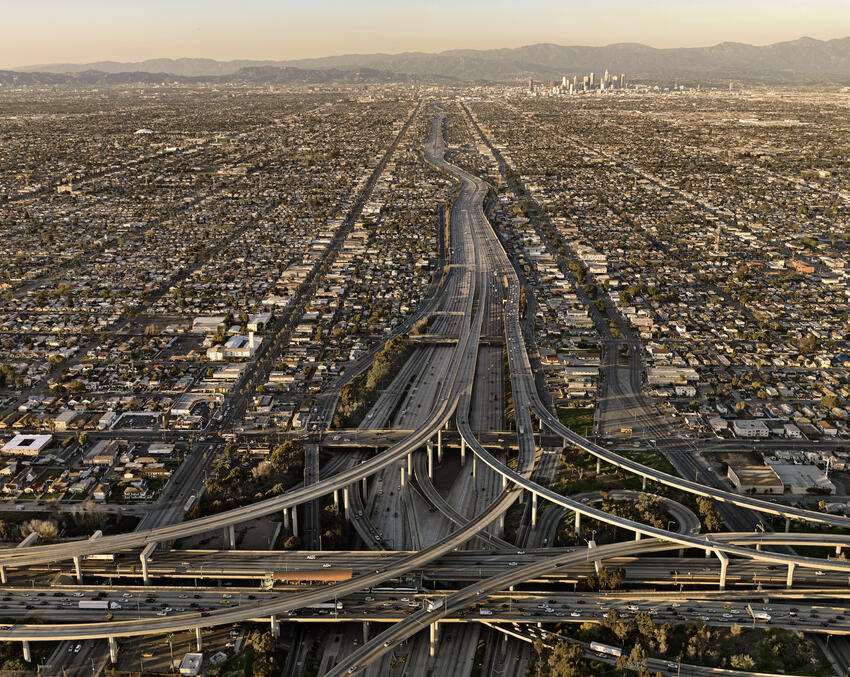 The exhibition surveys a decade of Burtynsky’s photographic imagery, exploring different aspects of the modern world’s most transformative resource, oil. The exhibition is organized by the Nevada Museum of Art in Reno, the same museum responsible for Ugo Rondinone’s Seven Magic Mountains public art installation in Las Vegas.

From 1997 to 2009, Burtynsky chronicled the production, distribution, and use of oil, revealing the rarely-seen mechanics of its manufacture and the altered landscapes formed by its extraction. He organizes his work thematically, passing from oil fields to massive refineries, highway interchanges, gatherings of motor culture aficionados, and the debris that oil leaves in its wake: car scrap yards, mammoth ship breaking operations, and fields of decrepit equipment. Burtynsky also visited the car-dependent suburban housing developments of North Las Vegas; his images of the city provoke questions about the types of communities people choose to build, and human dependence on natural resources to meet the demands of our suburban infrastructure.

Burtynsky's photographs render his subjects with a transfixing clarity of detail. He precedes every new body of work with research that evolves into negotiations with the authorities of the areas he has chosen to shoot. The angle and height of each image is carefully selected to convey a sense of the sublime. Each photograph in Edward Burtynsky: Oil is a singular alliance between the seriousness of a documentarian and the aesthetic eye of a committed artist.

Edward Burtynsky’s photographs of industrially transformed landscapes are in the collections of major museums around the world, including the National Gallery of Canada, the Bibliothéque Nationale, the Guggenheim Museum, and the Museum of Modern Art, New York. Born in 1955 of Ukrainian heritage in St. Catharines, Ontario, Burtynsky is a graduate of Ryerson University and Niagara College. His father worked on an automobile production line at a General Motors plant in his hometown. Burtynsky credits this experience as his earliest exposure to the subject of industry, and oil in particular. Major exhibitions include Manufactured Landscapes (2003); Before the Flood (2003); Burtynsky – China (2005); and Edward Burtynsky – Quarries(2006), all of which have traveled extensively to venues in Canada, the United States, Europe, and Asia. In 2004 Burtynsky was awarded the prestigious TED Prize. He holds numerous honorary doctorate degrees. In 2007 he was named an Officer of the Order of Canada, that nation’s highest civil honor, and in 2016 he received the Governor General’s Award in Visual and Media Arts. His debut feature film Watermark (2014) was named Best Canadian Film by the Toronto Film Critics Association.

Acclaimed photographer Edward Burtynsky presents his work in Oil, a photographic exploration of the effects of this critical fuel on our lives. These images tell an epic story of mankind expressed through our discovery, exploitation, and celebration of this vital natural resource. After the lecture, forum attendees are invited to tour the exhibition Edward Burtynsky: Oil, on view in the Barrick Museum’s main gallery.
Sponsored by the Nevada Museum of Art in Reno, UNLV Marjorie Barrick Museum, the UNLV College of Liberal Arts and the Dean's Associates.

China Town is a video made by artist Lucy Raven as she followed the path of copper ore from an open pit mine in Eastern Nevada to China, where it was eventually processed into copper wire. The film is permanently housed in the archive collections of the Center for Art + Environment at the Nevada Museum of Art in Reno.

Suggest voluntary contribution:
$5 for adults;
$2 for children and seniors

Nevada Museum of Art in Reno and the UNLV Marjorie Barrick Museum.​ ​All of the photographs in Edward Burtynsky: Oil are drawn from the Nevada​ ​Museum of Art, Carol Franc Buck Altered Landscape Photography​ ​Collection.