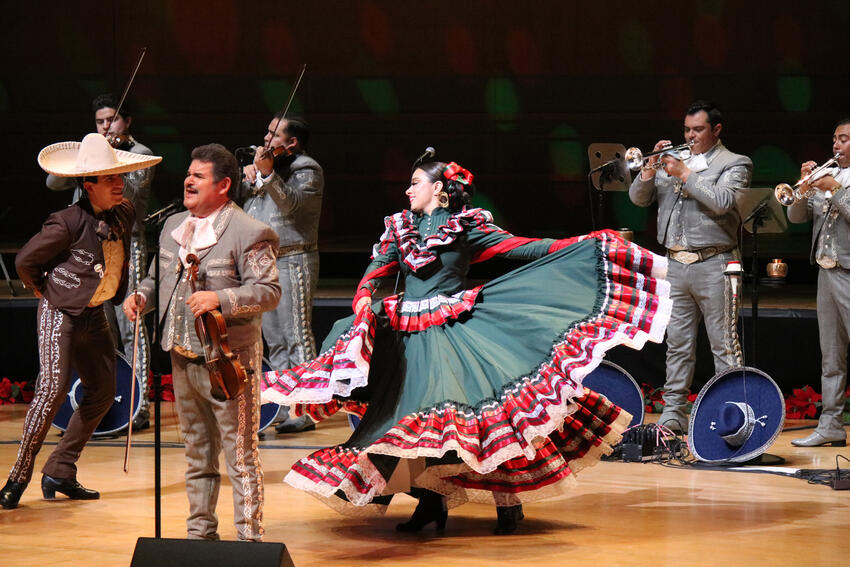 Mariachi Los Camperos was founded in 1961 by Jose Natividad “Nati” Cano. Cano played a fundamental role in the development of mariachi music in the United States by training and mentoring new generations of mariachi musicians including the addition of female performers in the mariachi groups. The Mariachi “Giant” was a visionary leader and wanted to take mariachi performance out of customary locations such as Cantinas and into concert halls where celebrities performed. He fulfilled his dream by performing at the White House, Carnegie Hall, Lincoln Center, Kennedy Center and other recognized venues where mariachis had never previously performed. Nati Cano passed away in 2014 and he left Mariachi Los Camperos in good hands, having passed the leadership baton to the group’s longtime musical director, Jesus “Chuy” Guzman. Guzman was Cano’s right-hand man for nearly three decades. Under Guzman’s direction, Los Camperos released a 2015 Grammy-nominated musical tribute to Nati titled Tradición, Arte, y Pasión, and recently received a 3rd Grammy award for their CD De Ayer Para Siempre. Chuy Guzman & Mariachi Los Camperos continue to work to pass the mariachi tradition to a new generation of mariachi musicians across the United States and are known as one of the best Mariachi groups in the world.