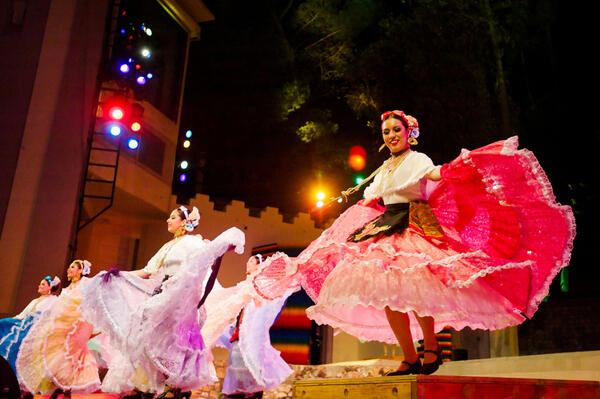 Ballet Folklórico de Las Vegas presents classes on the history and folk dance styles from various regions of Mexico.  The classes are currently focusing on the dances from Veracruz and Jalisco. Classes will meet on Tuesdays and Thursdays from 7:15-9:15 p.m. and are taught by Kareli Montoya.

Kareli Montoya's career in the folklórico and mariachi world began at the young age of seven at a community park in the city of Commerce, CA. Throughout her childhood Kareli had the fortune of learning from the best instructors in California and the U.S. such as Maria Venegas (founder of the Ballet Folklórico del Sur de California), and folklorico pioneer, Benjamin Hernandez (founding member of the Ballet Folklórico de la U de G and founder of professional company Mexicapan). At the age of twelve, Kareli was invited to form part of professional dance company, Danza Teocalt, directed by Miguel Angel Diaz, where she was given the opportunity to tour with Grammy Award-Winning Mariachi Los Camperos de Nati Cano. At age fifteen she became the youngest dancer ever given the opportunity to perform at the legendary La Fonda de Los Camperos where she danced every week for three years.

In 2009, Kareli and three other dance colleagues founded Folklor Pasión Mexicana, a professional dance company. While in this company she performed in the 2011 Tournament of Roses Parade, the Santa Barbara Mariachi Festival, and shared the stage with  various famous mariachi bands such as Mariachi Vargas and Mariachi Los Camperos. In 2011, after graduating from California State University, Los Angeles with a degree in Social Work, Kareli travelled to Colima, Mexico where she studied and performed with internationally known Ballet Folklórico de la Universidad de Colima directed by folklórico icon and sculptor Rafael Zamarripa. After returning from Colima Kareli founded Ballet Folklórico de Los Ángeles in 2011 and founded BFLA Performing Arts Academy in 2013.

Kareli has also helped co-produce several concerts for Star Entertainment, a non-profit production company owned by Dr. Raul Ruiz, that has created high quality cultural concerts for over ten years. Her latest venture has begun in Las Vegas, Nevada, where she has expanded her company to serve the Las Vegas community and founded Ballet Folklórico de Las Vegas.

For directions and parking near the MPE building, please visit the Department of Dance website.

We are very excited to have expanded to Las Vegas, Nevada in 2016 where we are  sharing our knowledge of folklórico with the community. We have also formed Ballet Folklórico de Las Vegas, a professional dance company that will feature the most elite folklórico dancers in the city.