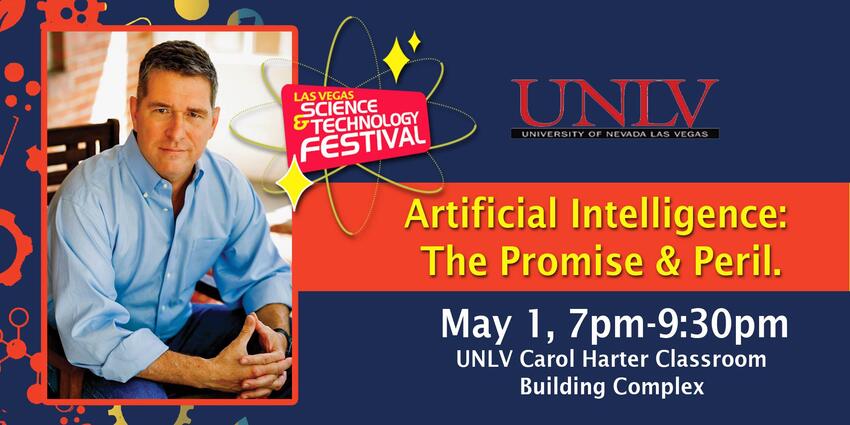 Author and filmmaker James Barrat will discuss the promise and peril of artificial intelligence.

This speaker series is presented by the Las Vegas Science & Technology Festival and UNLV - Howard R. Hughes College of Engineering.

Barrat contends intelligence, not strength or speed, is the superpower that enables humans to steer the future. Scientists around the world are developing machines whose intelligence grows exponentially, and will someday dwarf our own. If we fail to learn how to control these machines, before we create them we will be stuck in an unwinnable dilemma: we will have to rely on their kindness to survive. Should we bet our existence on it?

As an award-winning documentary filmmaker, Barrat has made a career from introducing audiences to complex ideas in engaging and provocative ways. His films have set ratings records on National Geographic, Discovery, PBS, and other broadcasters in the US and Europe. Barrat’s take is about what is wrong with the development and application of advanced AI. It is about short term problems – like unemployment and killer drones – and the long term specter of sharing our planet with creatures a million times more intelligent than we are. It is about AI’s soaring potential, and an apocalyptic downside you will never hear about from Google, Apple, IBM, Facebook, or Amazon.

Why have Elon Musk, Bill Gates, and Stephen Hawking raised the alarm about the dangers of artificial intelligence? Join Barrat’s quest to engage the world in the most important conversation of our time.

This event is free and open to the public. However you do need a ticket to attend. Tickets may be reserved on-line at Eventbrite.

Parking is available in the UNLV Tropicana Parking Garage near SSC-B or in any parking spot labeled Student or Staff for free after 7pm. Parking is enforced Monday-Thursday 7 a.m.-7 p.m. and Friday 7 a.m.- 1p.m. If you are visiting UNLV during these times, you must purchase a parking pass for one dollar per hour or four dollars per day. If you are coming on the weekends or after 1 p.m. on Fridays, you do not have to purchase a pass. Handicap, metered and 24-hour reservation spots are always enforced. These passes may be purchased at the entrances of the Tropicana Parking Garage (#78 on the map). You may also park in the Thomas & Mack parking area outside the parking garage if the garage is full. Make sure that your parking pass is clearly seen in order to avoid receiving a parking citation. Please be aware that you will need exact change for the parking permit. If you are taking a Charter Bus please have them pull up to the round-about directly in front of the Thomas & Mack Center. A parking map can be accessed here.

This speaker series is presented by the Las Vegas Science & Technology Festival and UNLV - Howard R. Hughes College of Engineering.