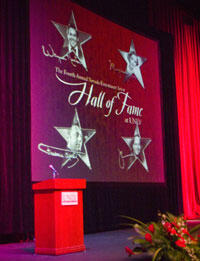 The Nevada Entertainer/Artist Hall of Fame at UNLV was founded in 2003 to honor past and present residents of Southern Nevada who have made a significant impact in the areas of visual arts, performing arts and/or architecture.

Each year inductees are presented with The Sidney Award, named for Academy Award-winning director and Las Vegas resident George Sidney who was posthumously inducted in to the inaugural Nevada Entertainer/Artist Hall of Fame at UNLV in 2003. Sidney, a three-time Academy Award-winning director and producer, worked with such legends as Tony Curtis, Frank Sinatra, Clark Gable, Howard Keel, Ann-Margret, and Lana Turner. He directed great films such as Anchors Aweigh, Show Boat, Kiss Me Kate, Viva Las Vegas, and Annie Get Your Gun.

To purchase tickets, visit the College of Fine Arts website.