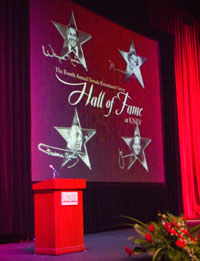 The Nevada Entertainer/Artist Hall of Fame at UNLV was founded in 2003 to honor past and present residents of Southern Nevada who have made a significant impact in the areas of visual arts, performing arts and/or architecture.

Each year inductees are presented with The Sidney Award, named for Academy Award-winning director and Las Vegas resident George Sidney who was posthumously inducted in to the inaugural Nevada Entertainer/Artist Hall of Fame at UNLV in 2003. Sidney, a three-time Academy Award-winning director and producer, worked with such legends as Tony Curtis, Frank Sinatra, Clark Gable, Howard Keel, Ann-Margret, and Lana Turner. He directed great films such as "Anchors Aweigh," "Show Boat," "Kiss Me Kate," "Viva Las Vegas," and "Annie Get Your Gun."