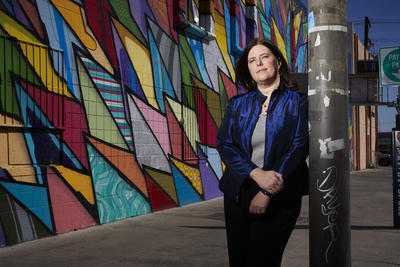 Criminal justice professor Alexis Kennedy was committed to giving a voice to the young survivors of human trafficking through her research.

“Survivors themselves have rarely been asked about what services are helpful, what barriers to change exist, and what strengths professionals should leverage to assist these most at-risk youth in our community,” she said. “My community-based research project, funded by the Department of Justice, is designed to give a voice to these vulnerable victims in our community.”

The recipient of UNLV’s 2018 Community-Based Research Award, Kennedy explains that Las Vegas leads the U.S. in the commercial sexual exploitation of children due to robust rates of prostitution.

In 2005, Las Vegas established the first specialty juvenile delinquency calendar for children exploited through prostitution. On the federal level, these children are considered victims, but locally they are labeled as delinquent and managed through juvenile justice, Kennedy explained. The number of children arrested and recidivism rates have remained constant over the past decade, with 150-200 children arrested each year.

“So increasing awareness has not abated the issue,” Kennedy said, “and survivors themselves have rarely been asked for their input.”

Funded by a Department of Justice $624,000 grant, Kennedy served as principal investigator on the survivor-focused research project through which she interviewed dozens of victims of human trafficking.

“They are the true content experts in this area but are rarely asked their opinions,” Kennedy said. “Sharing their experiences will shape programs across the U.S. Their strength is amazing, and I am honored to be able to give them a voice.”

Judge William Voy, the Chief Family Court Judge of the Juvenile Division, works closely with Kennedy to identify placement outcomes, new services needed, and barriers to change. He wrote a letter of support for the grant application, as did local service providers and survivors of human trafficking.

“Dr. Kennedy has always volunteered to analyze the needs of youth and investigate best practices,” said Voy in his letter. “She has helped me write multiple grants (such as the two-year grant which funded a specialty court position for sexually exploited youth) and not once has she asked for payment or wrote herself into the grants. Year in and out, she takes time on the weekends to hand-code the data collected from my SEY Court. Since 2011, she has created an annual summary of the children who were seen in the commercially sexually exploited children court. These summaries have been used to educate the community and shape policy that betters the lives of those exploited youth.”

The results of this project will be shared statewide by Voy and Kennedy, both members of the Governor’s coalition to prevent the commercial sexual exploitation of children.