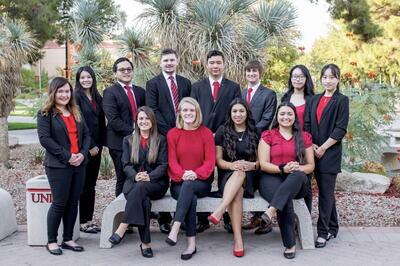 Earlier this month, a team of UNLV Accounting students won the 2021 Institute of Management Accountants (IMA) Student Case Competition -- which marks the fourth time in five years a UNLV team has won the competition.

In a blind submission and judging process, three of the four national finalist teams came from UNLV -- a first in IMA history. Each team was tasked with analyzing and communicating a solution to a business problem faced by Star Textiles, an Indian wholesaler of cloth.

Student teams from around the country submitted videos in early February and, after multiple rounds of judging narrowed the field to eight and then to four teams, the UNLV team was announced as the winner.  This year’s winning team – which received $5,000 – was led by Ingrid Zarate, who is UNLV’s first two-time national champion in this competition, winning her first title in 2019. She was joined by Maeve Dow, Kiara Sims, D’Nasia Thompson, and Paul Wolf. Senior Lecturer and Deloitte Faculty Fellow Danny Siciliano has served as faculty advisor to UNLV’s student teams since they began competing five years ago.

“Winning the IMA competition for the fourth time in five years was an amazing accomplishment in itself,” said Siciliano. “But having three UNLV teams to make it to the final round says a lot about our program and the drive of our students. I am proud to work with these students every year.”